After we’d warmed up with a coffee in the Pancake Rocks cafe we got back on the bus and were given a debrief about the fancy dress party tonight at our final destination, Lake Mahinapua.

The ‘Poo Party’ is a bit of a Kiwi Experience tradition and is something that I’ve heard all about from friends that have done the trip before me. We were given a theme (something beginning with the first letter of your Christian name or surname) and told that we would be dropped off in the town of Greymouth to pick up supplies for our costumes – there would be prizes for the winners! We had a little while on the bus before we arrived in Greymouth so we all spent the time planning out outfits for the evening ahead!

We spent about two hours in Greymouth ransacking the supermarkets for costume inspiration. I picked up two hula hoops, silver tape, cling film, newspapers, sellotape and green napkins – any idea what my costume was yet?

All shopped out we headed back on the bus and made our way to the Lake Mahinapua Hotel, affectionately known as the Poo Pub. Lake Mahinapua really is in the middle of nowhere but is lovely and remote with beautiful scenery. The girls and I shared our own little cabin which was lovely.

We set out straight away and starting getting our craft skills on for the night ahead. Before the party started we all had a big roast in the hotels bar which was amazing.

Full, we made our way back to the costume room and made the final tweaks to our outfits. In the end we looked a little something like this:

I was a martini (although someone asked me a little later on in the evening if I was a pond!), Jade was a jelly fish, Corrine a deck of cards, Rose was roadkill, Brea was a beer pong table, Victoria was Jesus, Marcus a mop and Tabitha a turtle! 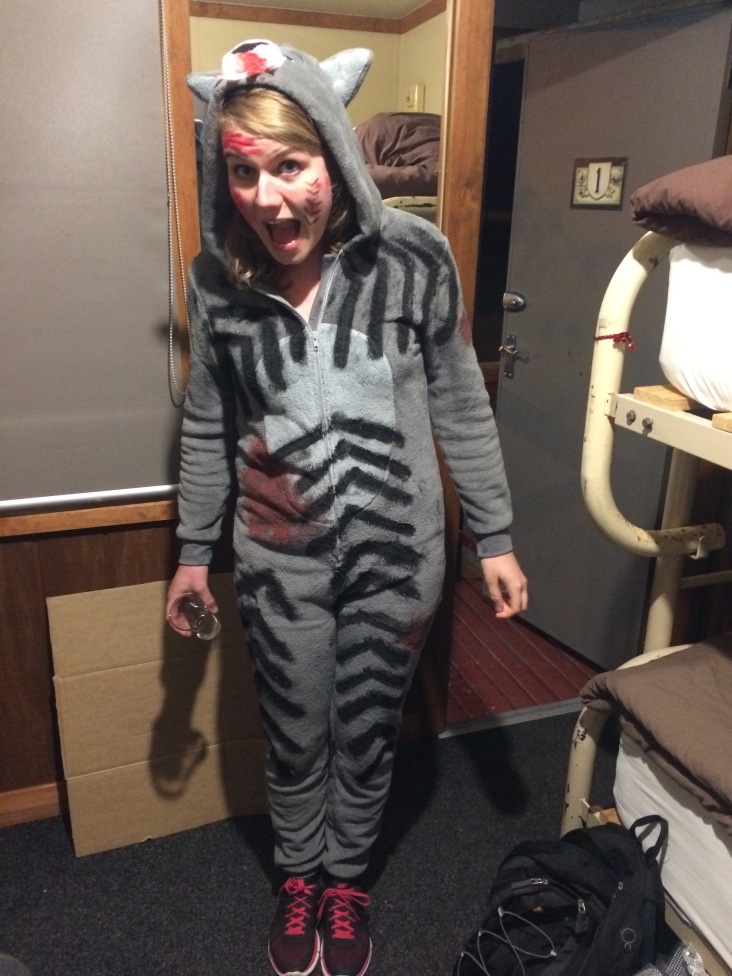 The evening was absolutely hilarious and made even better by the fact that everyone made such an effort. 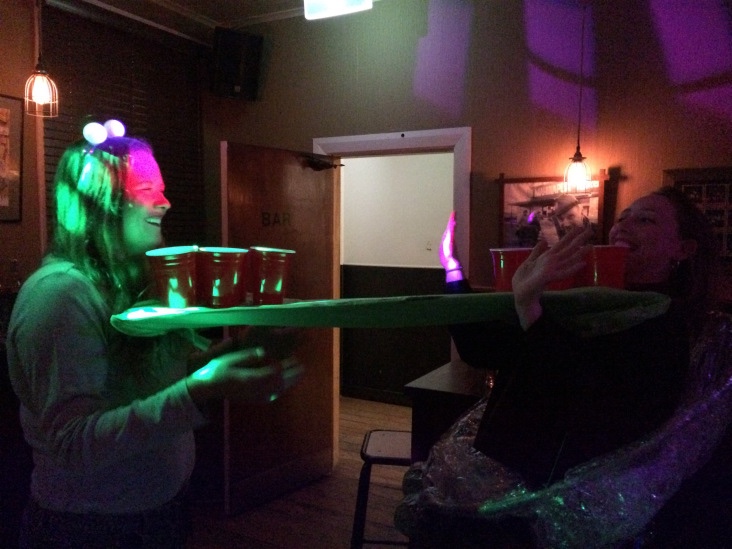 A big mention has to go to our driver Guy who went ALL OUT. His alter ego, Tiffany made an appearance and all I can say is she was, erm, convincing. It seems Guy has done this whole thing before..

A little later in the evening it looks like Guy has sore feet from his heels so out came the cow onesie. A particular highlight was his solo performance to ‘my milkshake brings all the boys to the yard’. Hilarious.

The poo pub has a tradition to take photographs of each group at each party. The photographs of all previous groups are either displayed on the wall of kept in photo albums which are scattered across the bar. Funnily enough I managed to find a photograph of Miles and Olly when they did the exact same trip almost 10 years ago! 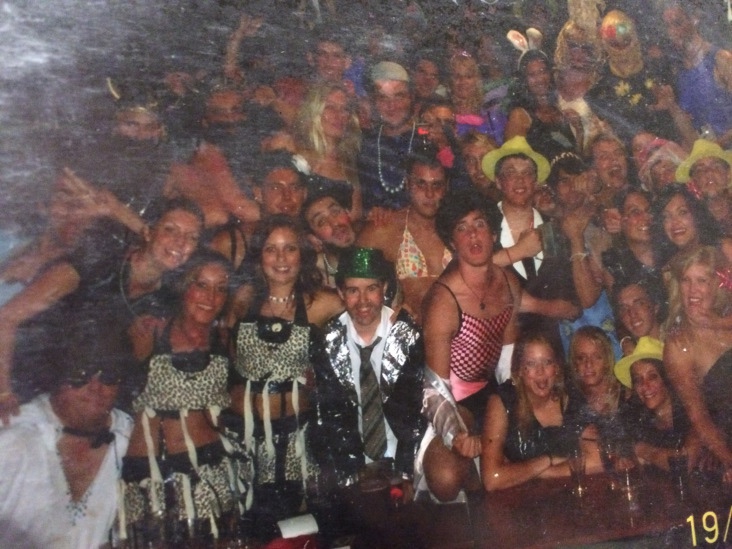 We crawled back into bed that evening and slept like logs – oh apart from me that is whose water bottle leaked over my entire bed. I slept therefore in a soaking wet mattress and woke up with cramp from avoiding the wet spots all night.

The next morning, still in Mahinapua, we were served a massive breakfast of bacon and pancakes which would well and truly see us through the day of travelling ahead down to Franz Josef. 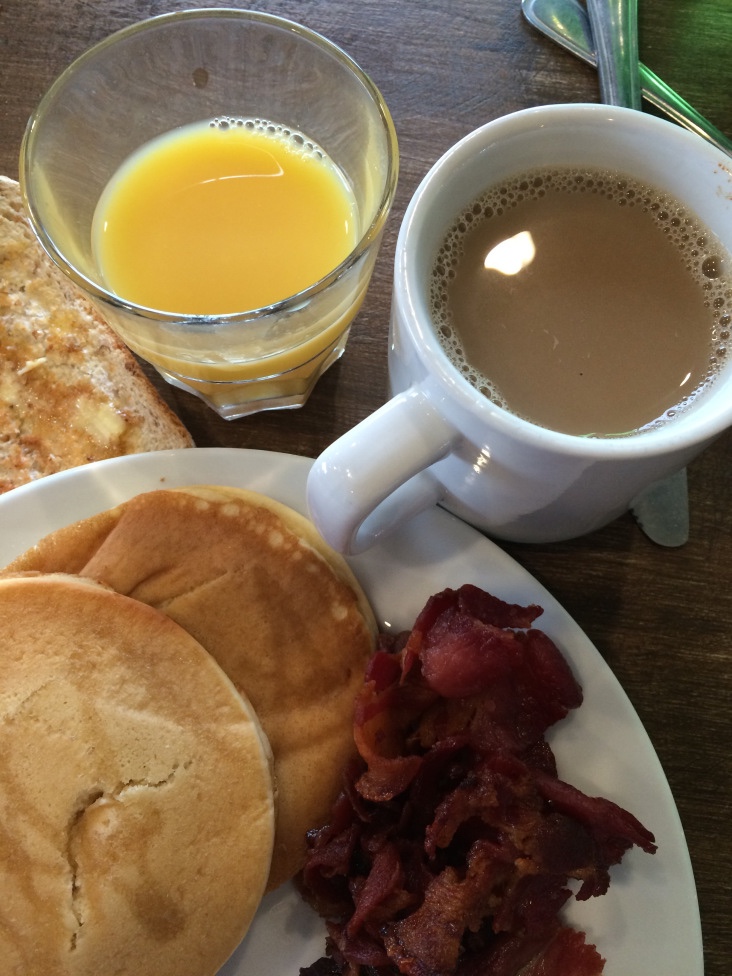 We made a stop off at Lake Mahinapua before hopping back on the bus and hitting the road. 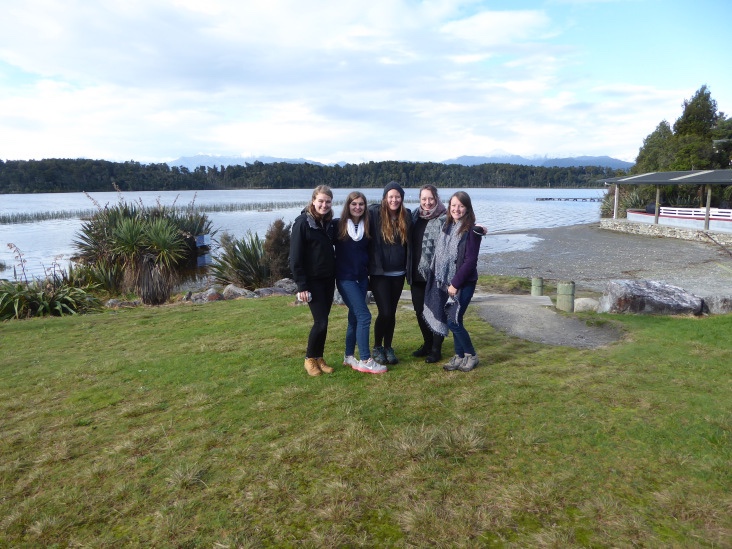 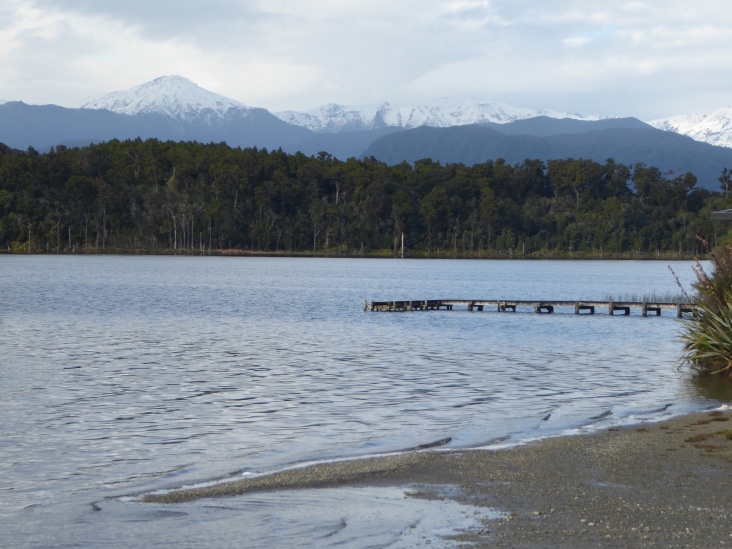