We left Buenos Aires in the late afternoon and made our way across to the bus terminal building, which, erm, was an experience.

We eventually made it to our bus however, and could not believe how much we had lucked out with the, I almost want to say luxury, of the vehicle!

We had a 23 hour bus ahead of us which initially sounded hellish, but on seeing our huge reclining seat/beds, our in built televisions and the complimentary food service, we were more than happy to hop on board. Just look how smug we all were! 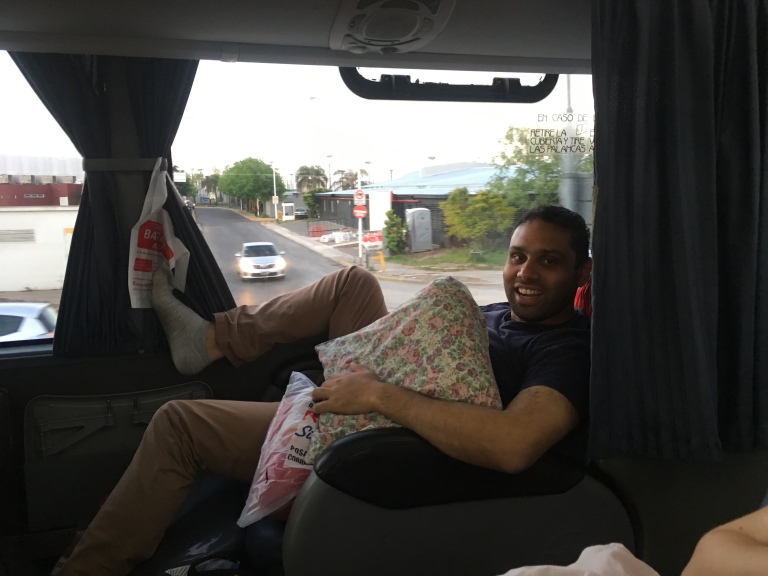 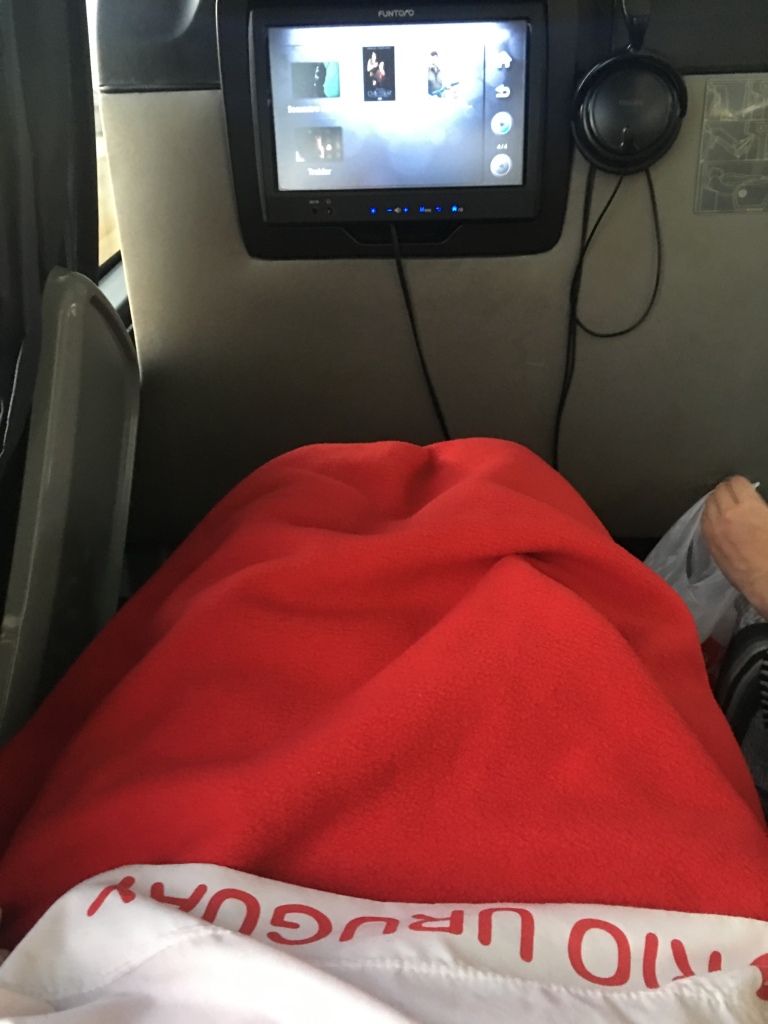 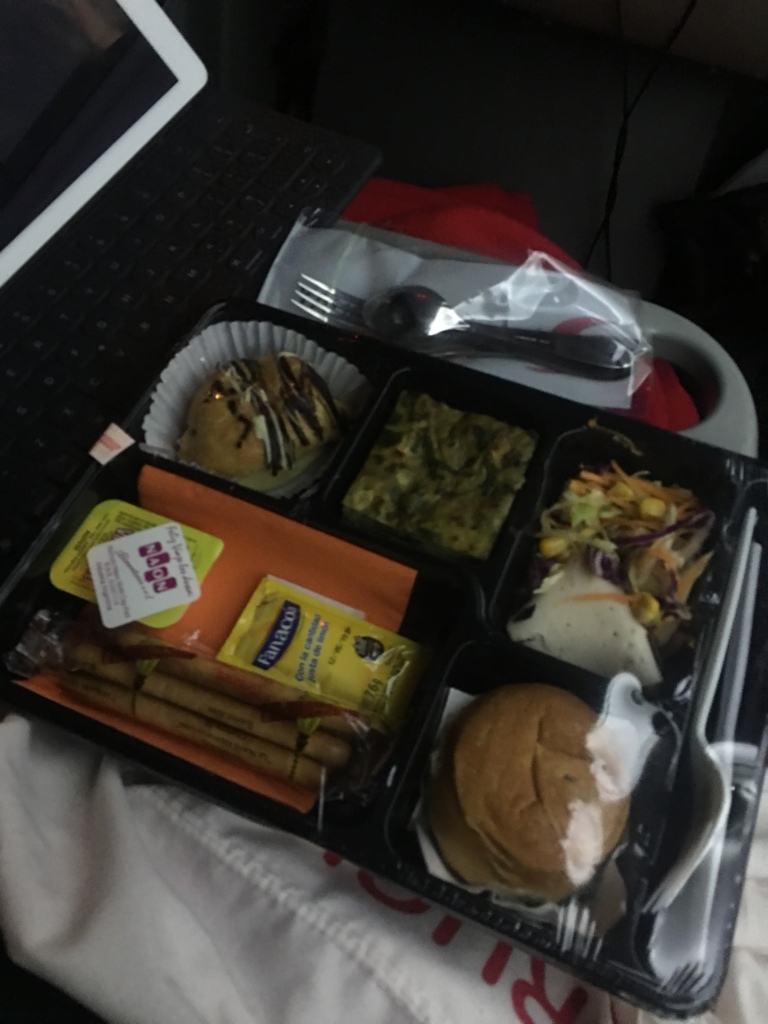 Funnily enough, the novelty didn’t actually wear off and we had a super comfortable journey which seemed to fly by – even if in the end it took 30 hours… I loved the way the the further we ventured into northern Argentina and the border of Brazil, you could easily see how the landscape and the people started to change; we were definitely entering rainforest territory. 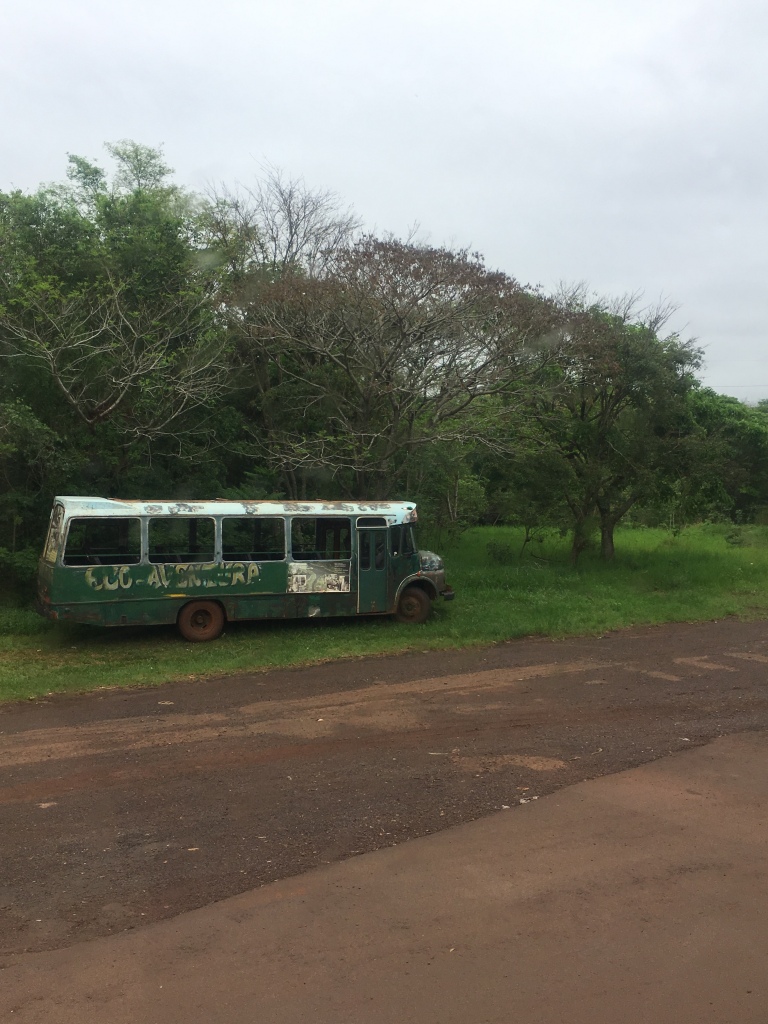 We had to cross through the Argentina border before heading through Brazilian customs and getting our passports stamped. Interestingly the border line lies right in the middle of a bridge; the markings on the side which suddenly change from the blue and white of the Argentine flag, to the distinctive yellow and green of the Brazilian side.

I literally can’t tell you how excited I was to cross this border from Argentina – I was officially in Brazil! 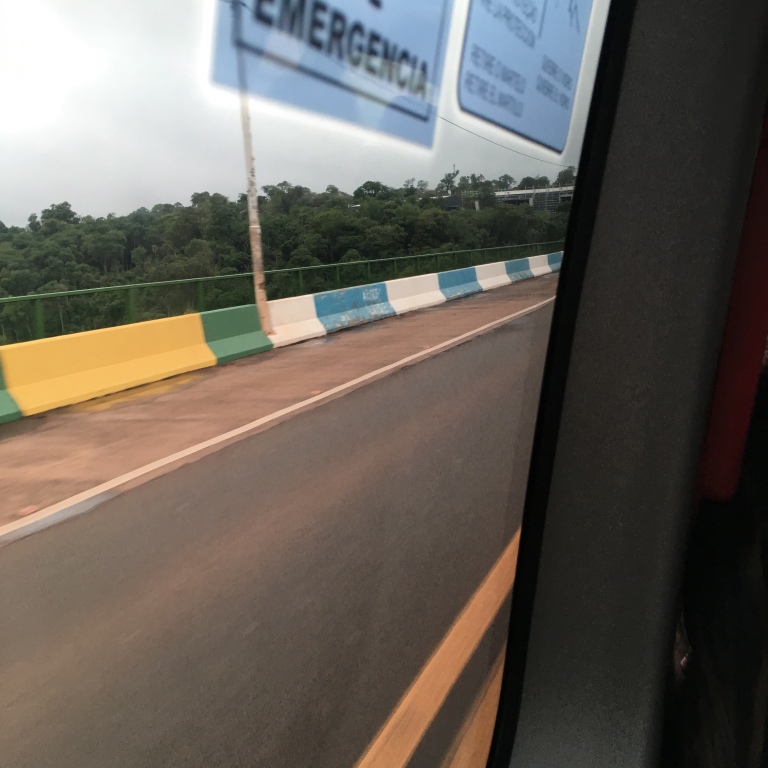 No rest for the wicked ensued, and we headed straight from the bus terminal, directly to the Brazilian side of the Iguazu falls – the Parque Nacional Iguaçu.

Before we properly got exploring however, we all opted to have a quick bite to eat at the burger joint inside the visitor centre. Little tip – if you do decide to stop there, make sure you get the vegetarian options. It was a worrying state of affairs when none of us could quite put our finger on what type of meat it was was used to make the burgers…

We survived lunch however and and got back in the cars to take us across to the falls. On hopping out, we were given our first views our across the incredible waterfalls. Now, I’ve seen quite a few waterfalls in my life; across in New Zealand, Australia, Scandinavia etc but I’ve honestly never seen anything quite like this, it was spectacular. 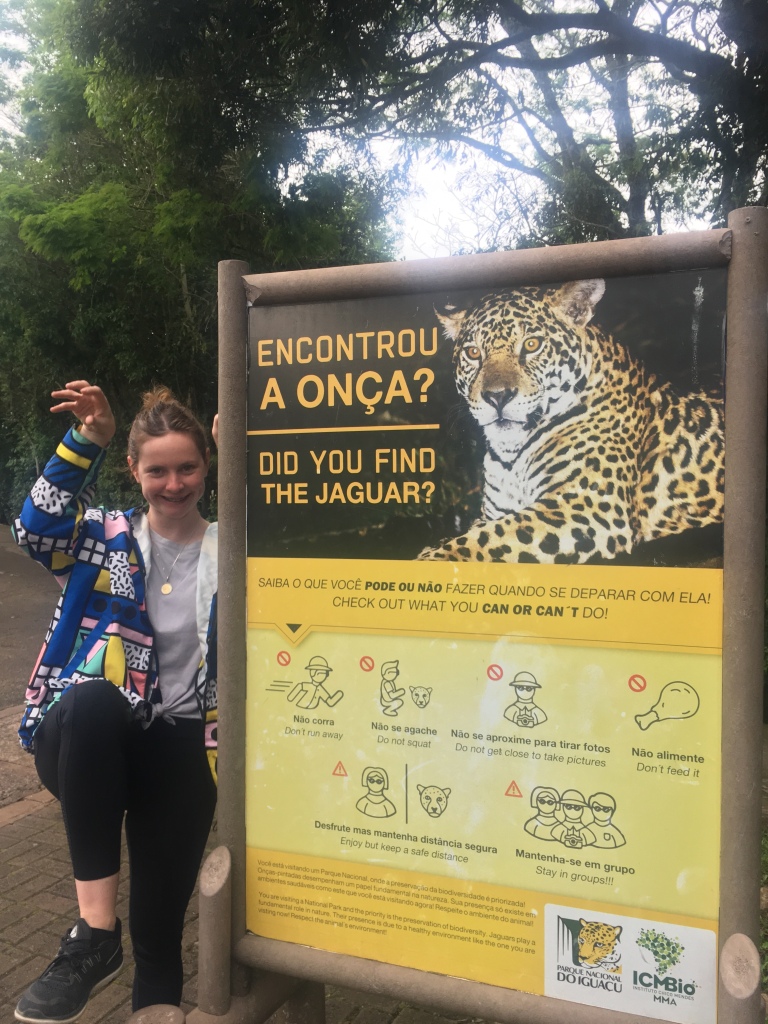 Iguazú Falls are among the greatest shows that Nature can offer on our planet. They are made of 275 waterfalls, spread across a distance of 2.7 km (1.7 mi). They make the well-known Niagara Falls look dwarf. Eleanor Roosevelt, wife of the former US president, is said to have exclaimed “Poor Niagara!” when she visited the falls. 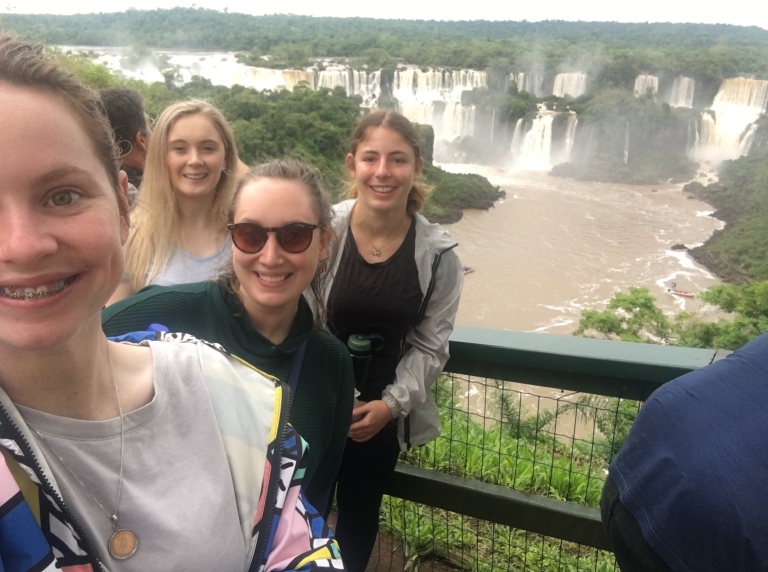 Iguazú means “great waters” in Tupi-Guarani, the language of the local indigenous peoples. These peoples had explained the formation of these powerful waterfalls by a legend featuring their deities. If you’ve read my posts before, you’ll know how much I love these sorts of tales.

We legend of the falls is thanks to the Guarani Indians who used to live around the Iguazú River. These Indians believed in a god named Mboi, a giant serpent god who lived in the river. In order to keep Mboi satisfied and quiet, humans had to be sacrificed. One day, a beautiful young lady called Naipí, a daughter of the Chief of the tribe was chosen to be sacrificed.

In that tribe, there was also a young warrior called Tarobá. Tarobá was deeplu in love with Naipí, and had been from the first moment he saw her. All the neighboring tribes were invited to attend this important sacrificial ceremony, however, before the sacrifice could take place, Tarobá kidnapped Naipí and they fled on the river on a canoe.

When he heard about it, Mboi was furious and violently moved his body, causing a giant crack to appear in the earth. This crack formed the Iguazú waterfalls –  Tarobá and Naipí, with their canoe, sank in the falls.

According to the legend, Tarobá became a rock who is constantly hit by the immense force of the water and Naipí became a palm tree overlooking the falls. This way, the two lovers were condemned to contemplate each other for eternity, without ever being able to be together again. 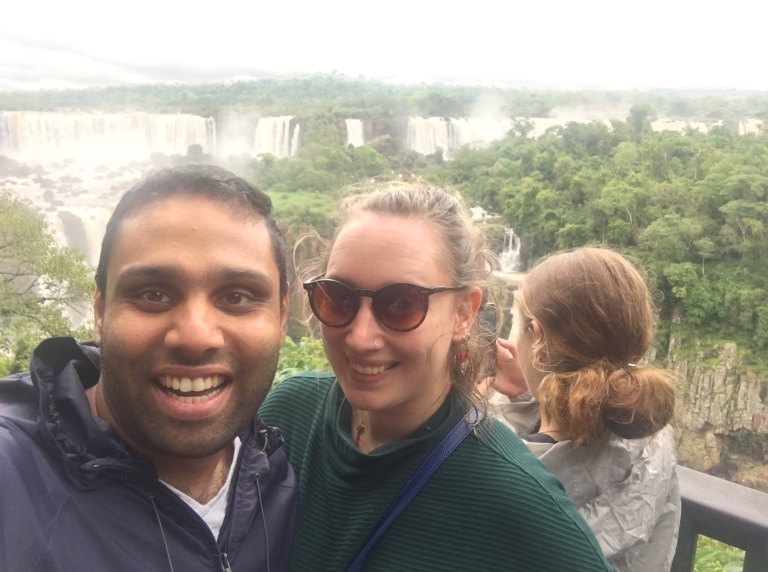 The actual formation of the Iguazú Falls is about as violent as in the legend. The landscape was created by huge volcanic and seismic mechanisms.

100 million years ago, massive volcanic eruptions took place. These eruptions resulted in several huge lava flows that were turned into the rock basalt. The Iguazú area is made of 3 layers of basalt, at 3 different heights.

The seismic movements that followed moved the layers of basalt vertically and horizontally. This created cracks in the earth, that geologists call faults. the Iguazú river now flows in the largest of these faults, enlarged by the erosion of water.

The first European to see the falls was a Spanish Conquistador called Alvar Nuñez Cabeza de Vaca, in 1542. He had first named them Santa Maria Falls, but they took the name of Iguazú a few years later.

In 1934, the falls got protected in a 67,000 hectare national park, shared between Brazil and Argentina. In 1984, the park was declared World Heritage Site by the UNESCO. 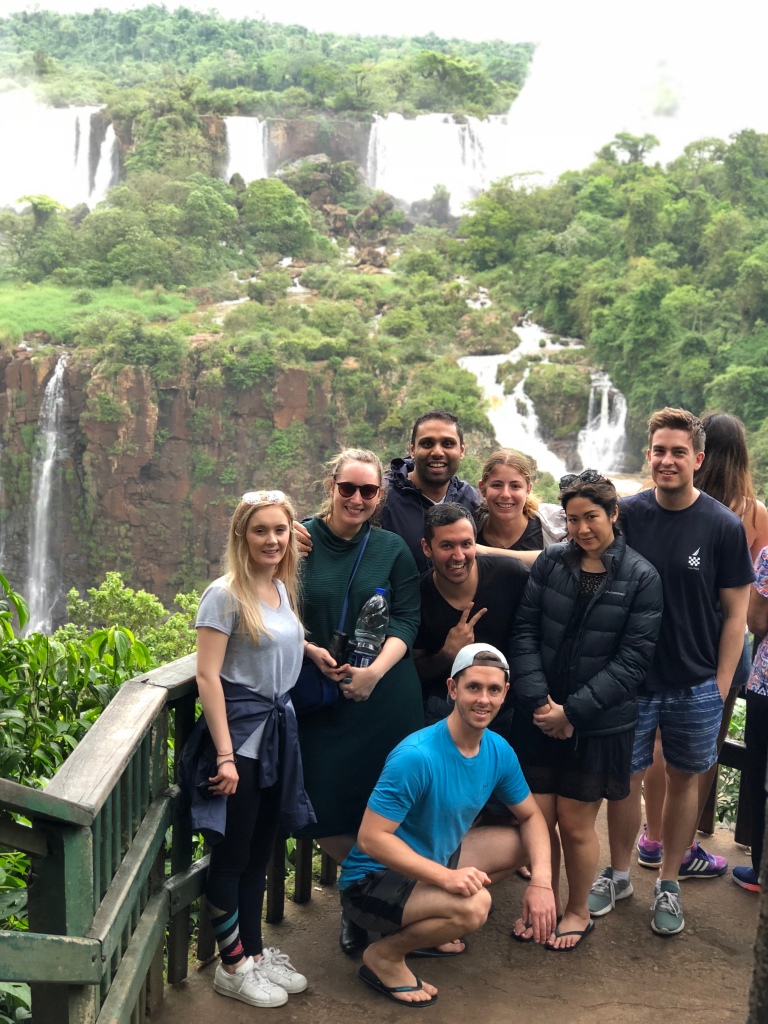 In addition to the falls themselves, the national park protects a big patch of what remains of the the Mata Atlântica, the Atlantic Forest. This forest used to cover a huge part of Brazil, and has nowadays dramatically plummeted. As much as 90% of the original forest has been cleared. Thus, The Iguaçu National Park in Brazil and the Iguazu National Park in Argentina are a masterpiece of the conservation of the Atlantic Forest ecosystem and biodiversity. 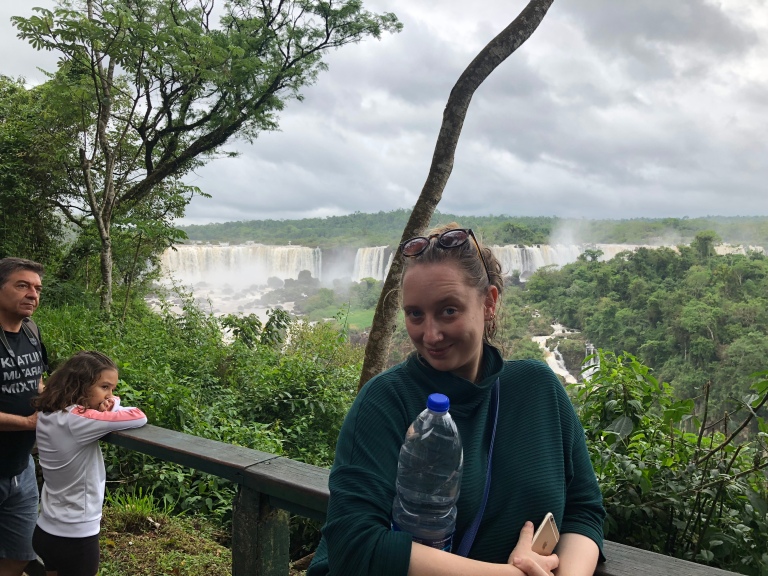 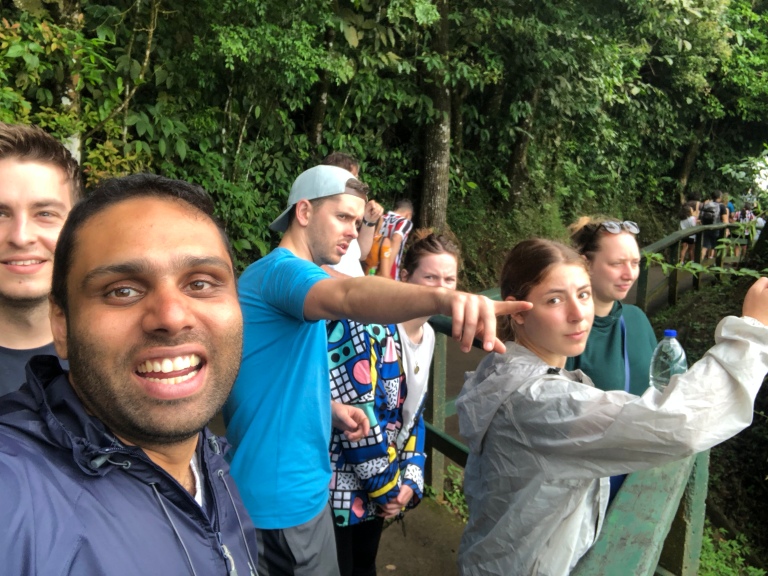 This is a major reason of the majesty of these falls, the immediate environment is still largely untouched. Only light infrastructures like walkways or a small railroad has been built in the immediate proximity of the falls.

We arrived into the city of Foz du Iguaçu and made our way across to our hotel for the next couple of days – the the Hotel Cassino. I must admit, most people in our group were not that enamoured about this spot, however I had a private room and a bathroom so I couldn’t complain too much. I even had three beds, all to myself so just call me Goldilocks. 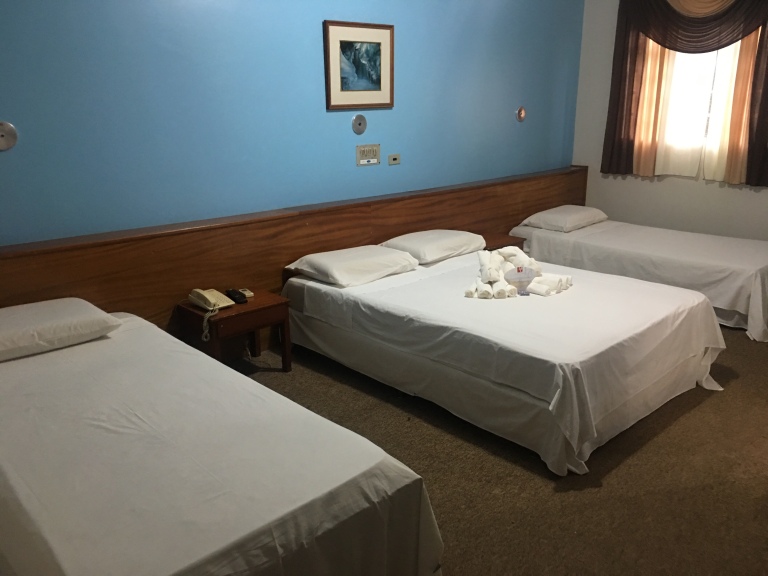 We got in and got settled before meeting in the reception and making our way across to one of the supermarkets in town. This super market was – AMAZING. I literally could have spent hours wandering the vegetable aisles alone!

Hunger soon well and truly got the better of us so we headed off to a restaurant which Camillo kept telling us was ‘ah-mazing’. He took us across to a bustling restaurant called Tropicana. Admittedly, it didn’t look too impressive inside, your typical buffet type place, but oh my goodness if you go by the saying ‘don’t judge a book by its cover’; it couldn’t apply here more.

The centre of the restaurant housed a huge buffet island serving literally anything and everything you could ever want. There was pizza, salads, pasta, all the potato varieties imaginable, rice dishes, salsas, pies, pastries, stir frys; honesty the list just went on. Having filled up your plate here, the waiters come round with huge skewers of meat which they carved directly at your table. It was incredible. The meat was obviously mostly beef however there were some great marinated chicken, lamb and pork skewers doing the rounds and my favourite of the night; spicy sausages! It was amazing. 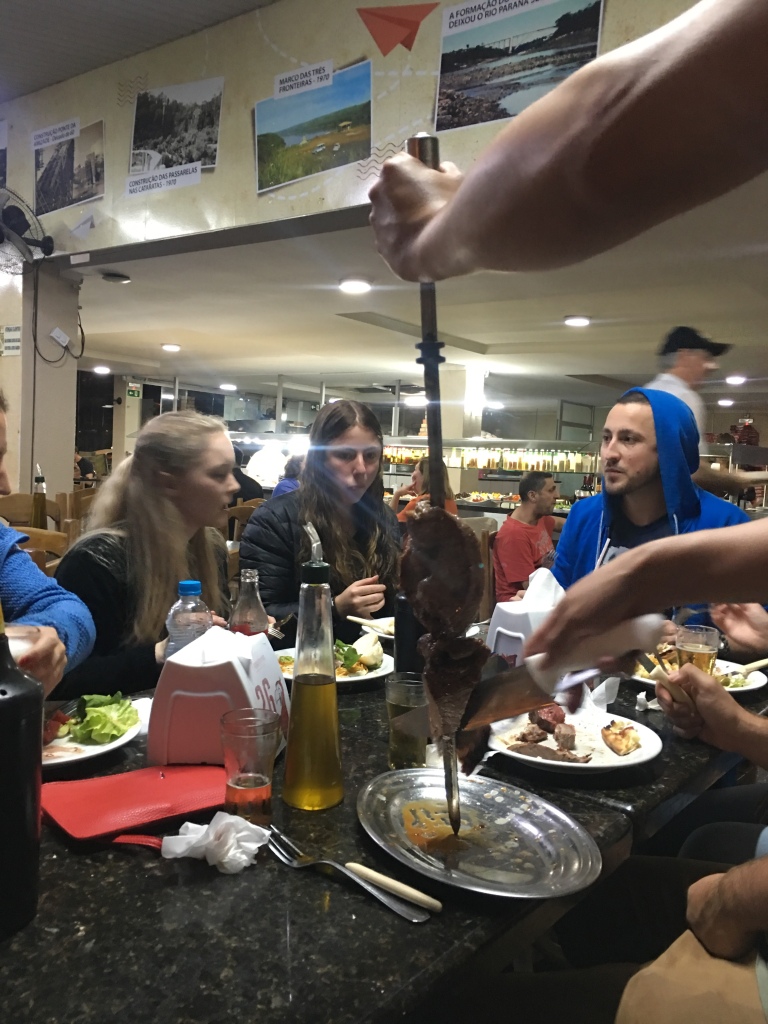 The next morning, we were up bright and early and made our way back across into Argentina to visit the falls that side. I will write about that day separately, as it was absolutely incredible.

Having returned from a long day at the falls, and back now in Brazil, we had some time to come back and get showered and changed. I was still completely damp from our escapades of boating through the falls so a warm shower was exactly what the doctor ordered. I actually think I ended up standing underneath it for a good 45 minutes, pretending it was a bath!

All feeling much better, we met in reception and headed out for dinner. We ended up wandering for quite some time, unable to properly decide what we wanted to eat. Some of us ended up choosing a restaurant in town called Capitao whilst a couple of the guys decided to head back to the buffet spot from the night before. Clearly the lure of unlimited meat was too much to turn down.

We set straight about at buying rounds of the traditional Brazilian national drink; Caipirinha, made with cachaça (a spirit made from sugarcane) sugar and lime. Delicious – and all the better for being in Brazil, of course.

The actual meal at the restaurant was ok – nothing spectacular however. Josh definitely made the sensible choice ordering steak which looked incredible. The Mexican style options on the other hand were nothing to write home about, however definitely filled a hole after a the long active day we had been having. Saying that, we literally had the funniest of evenings, chatting away and sipping on delicious cocktails. 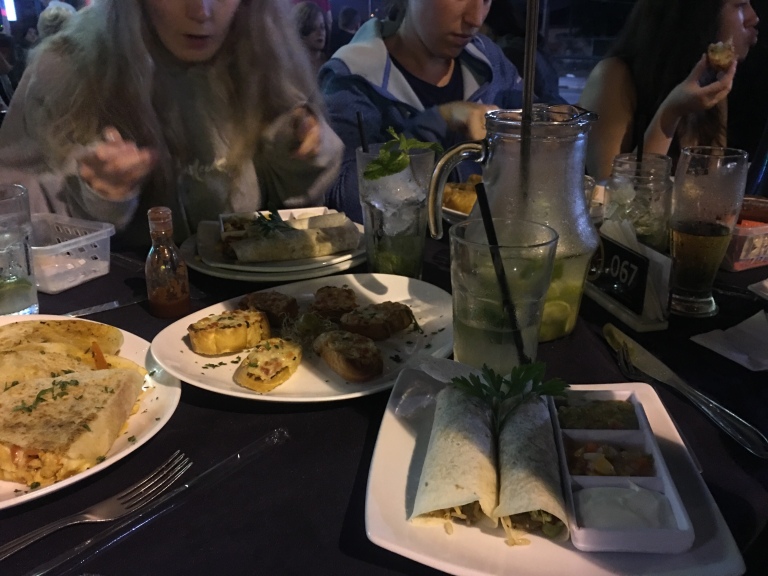 It’s safe to say we were all pretty merry on the walk back to the hotel…!

That ended our trip to the brilliant city of  Foz du Iguaçu which of course was a once in a lifetime experience being able to see the fantastic Iguaza falls, which, we all agreed, were one of the most amazing things we had ever seen in our lives.

We were all sad to be leaving, however, with Rio being our next stop, it’s safe to say we were all more than a little bit excited.