The ferry soon docked into the the little village of Flåm where we all disembarked and had some time to explore.

Flåm – pronounced Flom – is known as ‘the small village with the grand surroundings’ – and – you can totally see why. Surrounded by steep, snow capped mountains, thundering waterfalls, green meadows and picturesque farm, the storybook village of Flåm only has 350 residents,but attracts nearly 450,000 visitors each year.

After hitting the decks of the pier, I decided to wander around the wooden huts in the down, all housing restaurants, cafes, bakeries and souvenir stores. There’s even a pretty cool Viking brewery, [x] which has one awards for it’s craft beers. 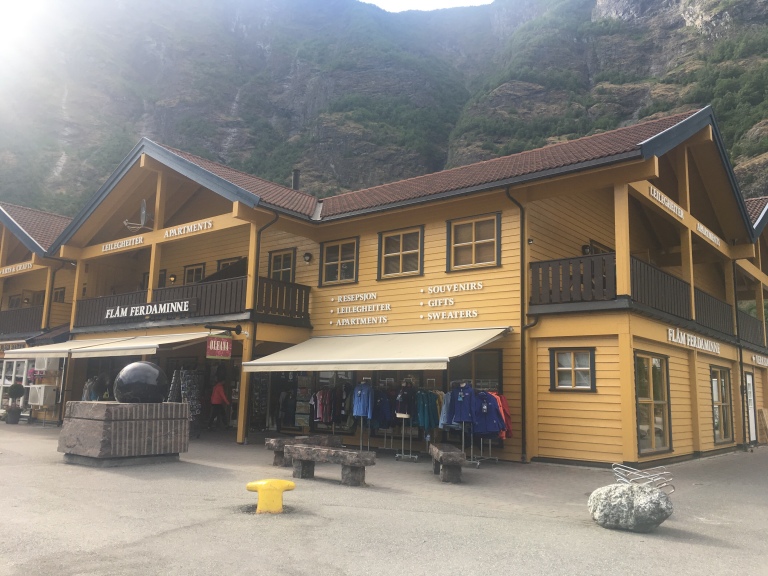 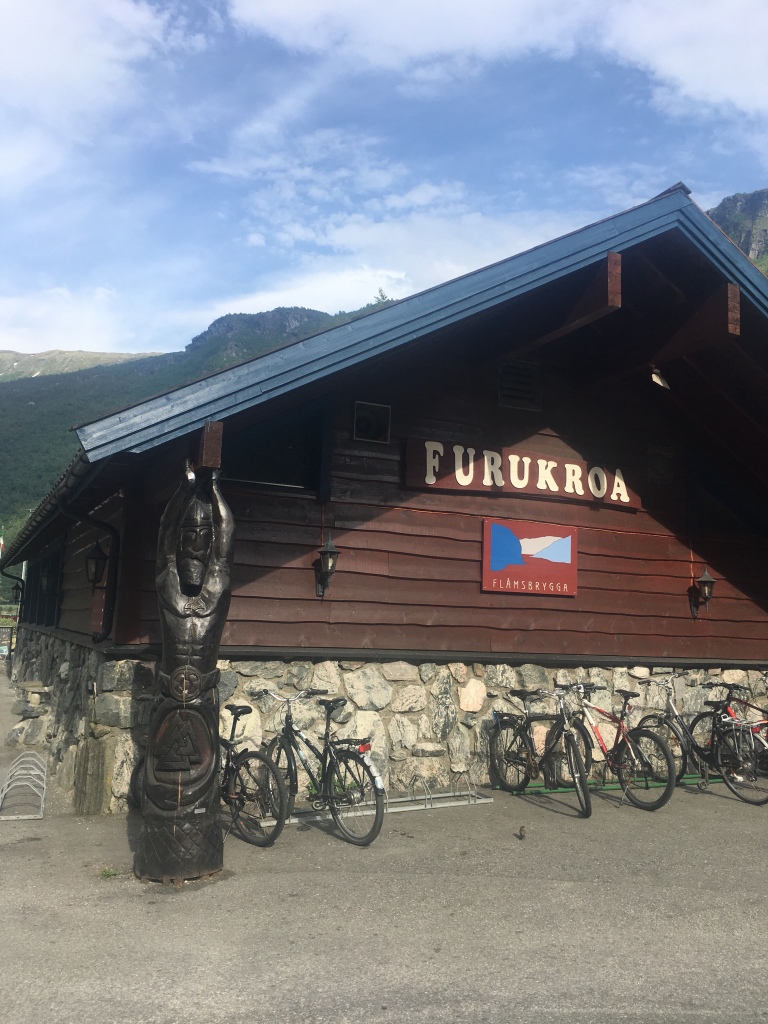 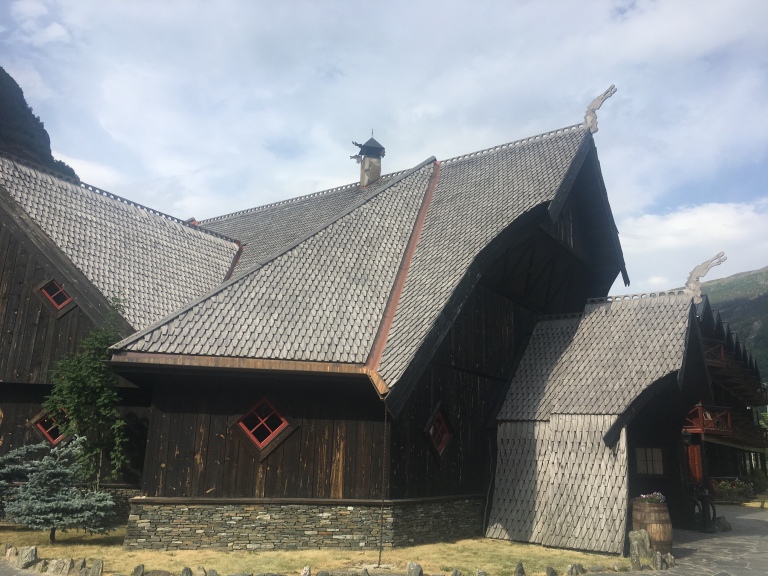 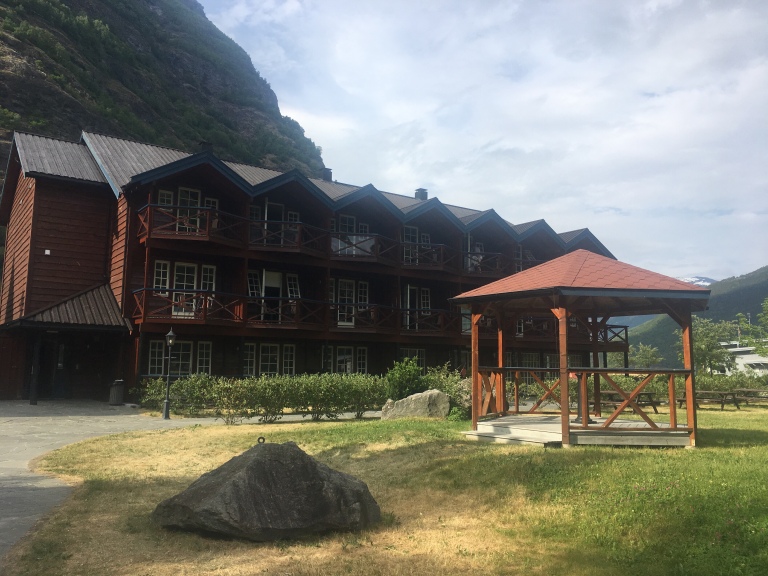 The main draw to the village of Flåm is of course, the world famous Flåmsbana Railway – recognised to be one of the world’s most beautiful train rides. I was lucky enough to be here in Flåm ready to explore this for myself!

The railway construction commenced in 1924 and the railway finally opened in 1940. The Flåm railway is one of the world’s steepest train rides built on normal tracks and close to 80% of its tracks run at a rise of 55%.

Before boarding the train I had about an hour or so to kill so I decided to pop into the Flåmsbana Museum which offers insights into the construction, the technical development of the railway and of course, those people responsible for it.

It was super interesting! 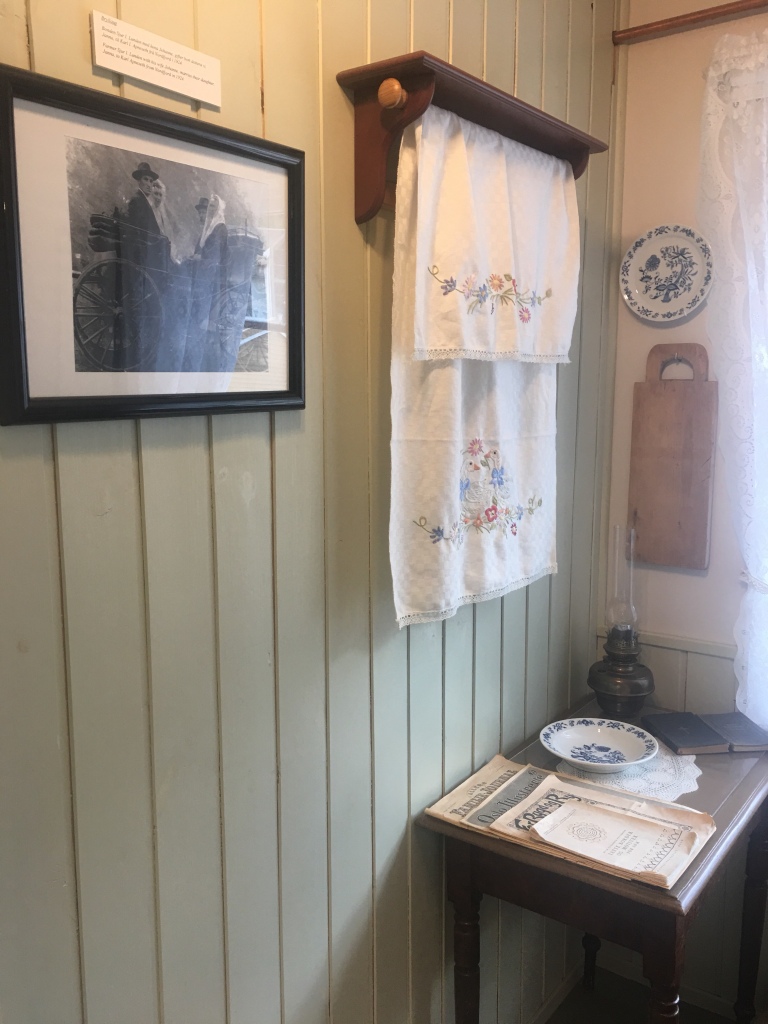 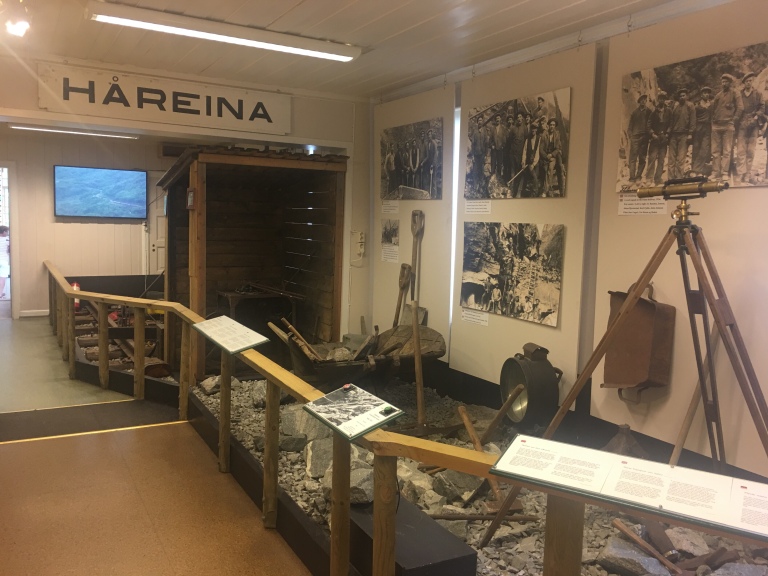 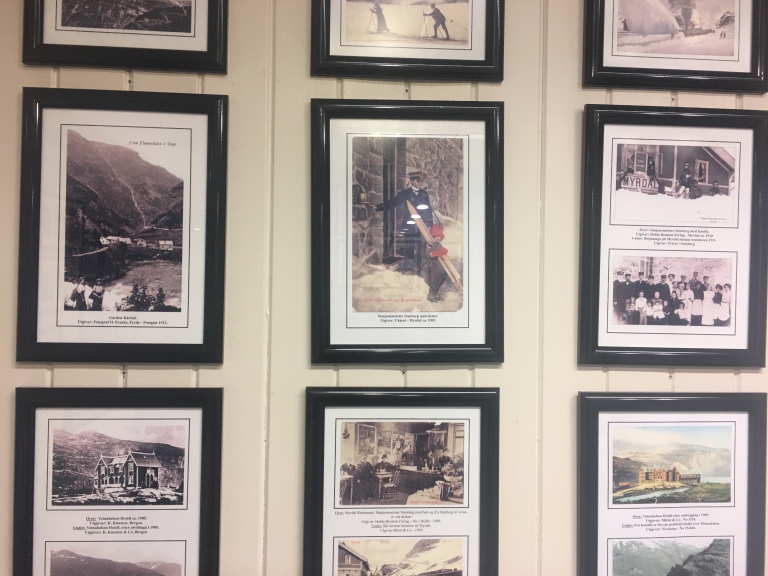 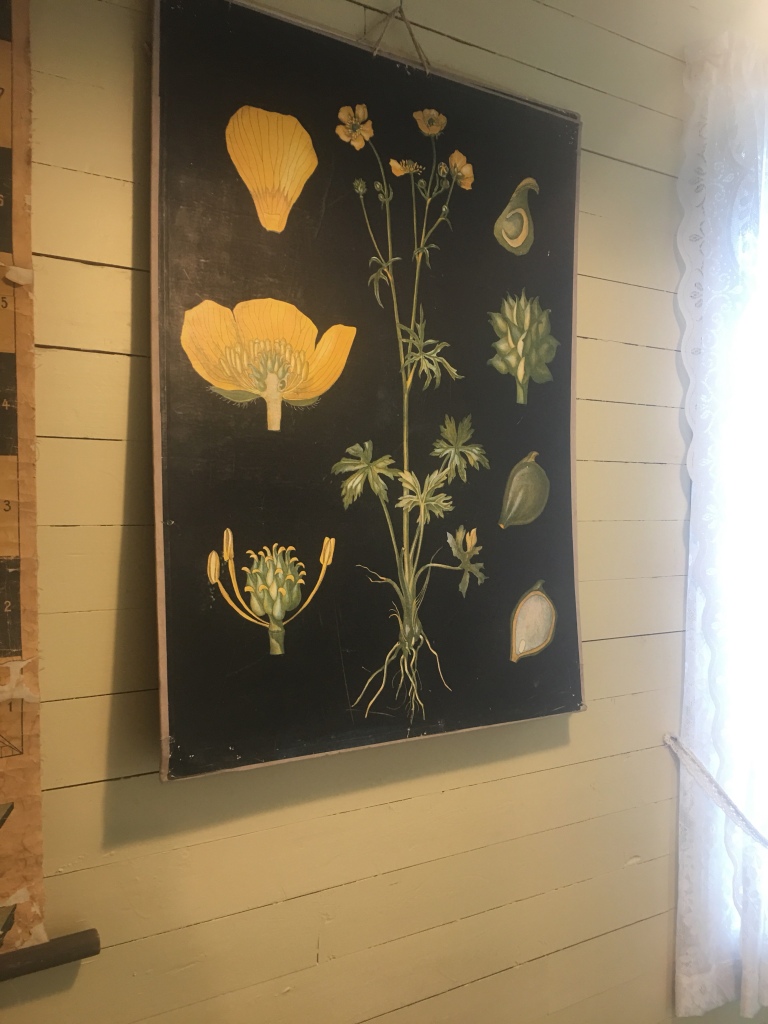 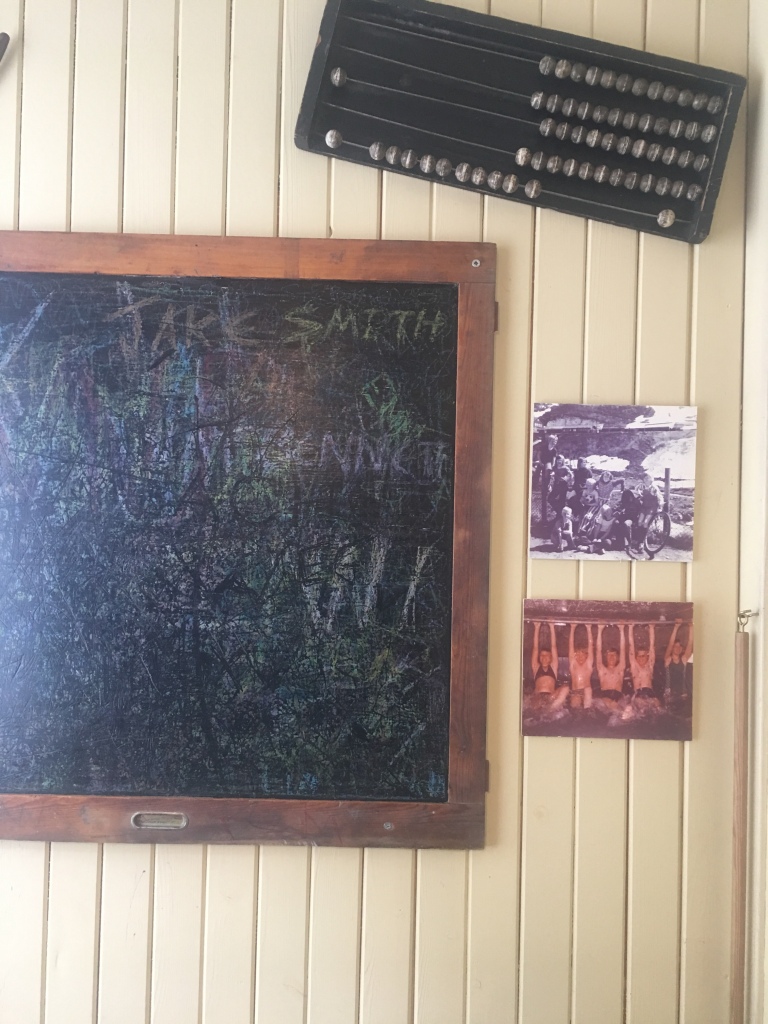 Just before the train was about to depart I decided it was well a good time to grab a quick bite to eat – and where better in Flåm than in an old train carriage; Toget Cafe.

I grabbed a quick sandwich and a vino (obvs) before wandering over and joining the queue to board the train. 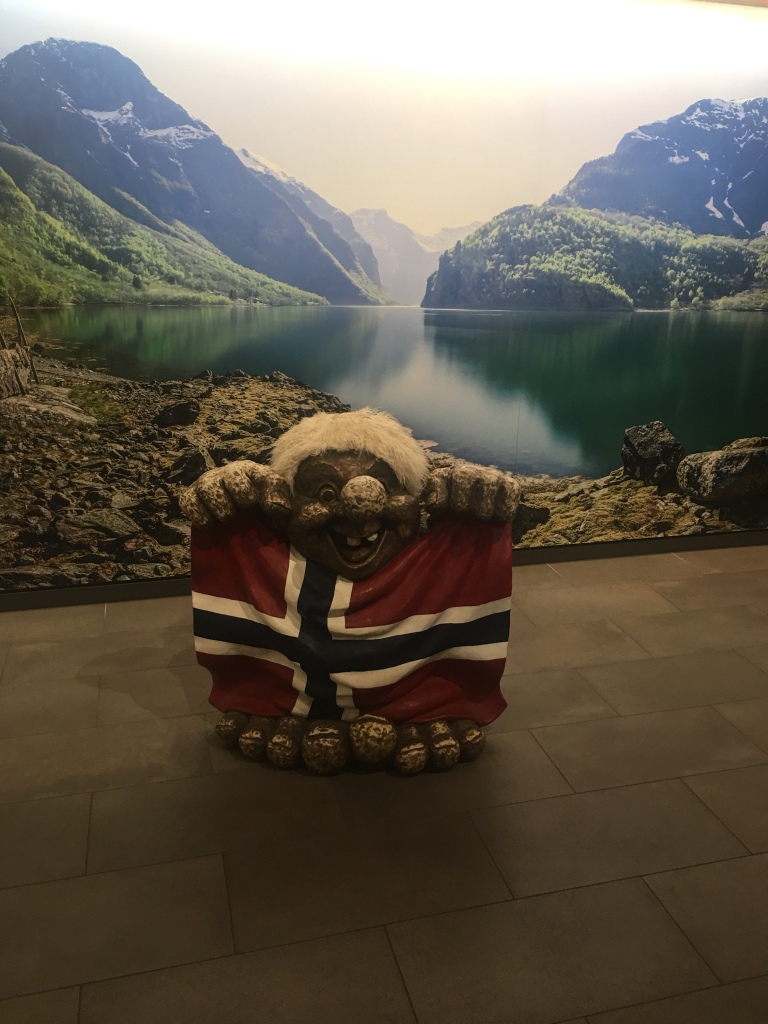 The train carriages harked back to the history of the railway with their wooden panels, red comfy seats and wide isles – it was definitely nice the the train still retained some of its historical features even though nowadays it was much more of a tourist attraction than a practical railroad. 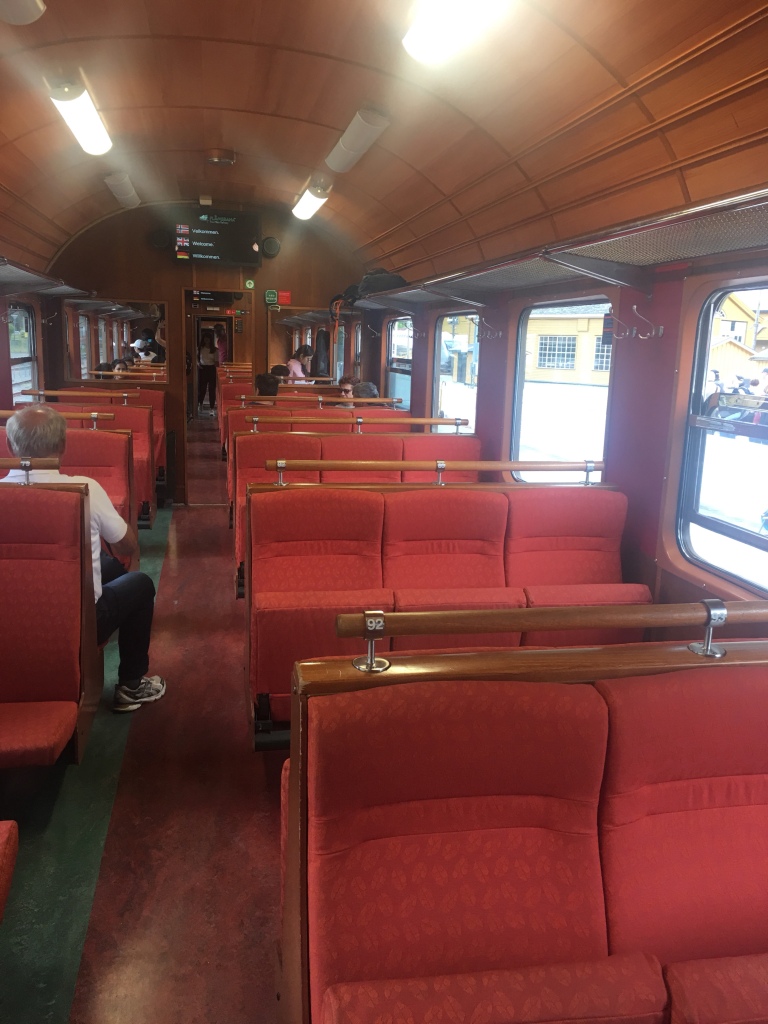 I got seated up; another little trip, if you get this train make sure you sit on the right hand side for the best share of the amazing views. 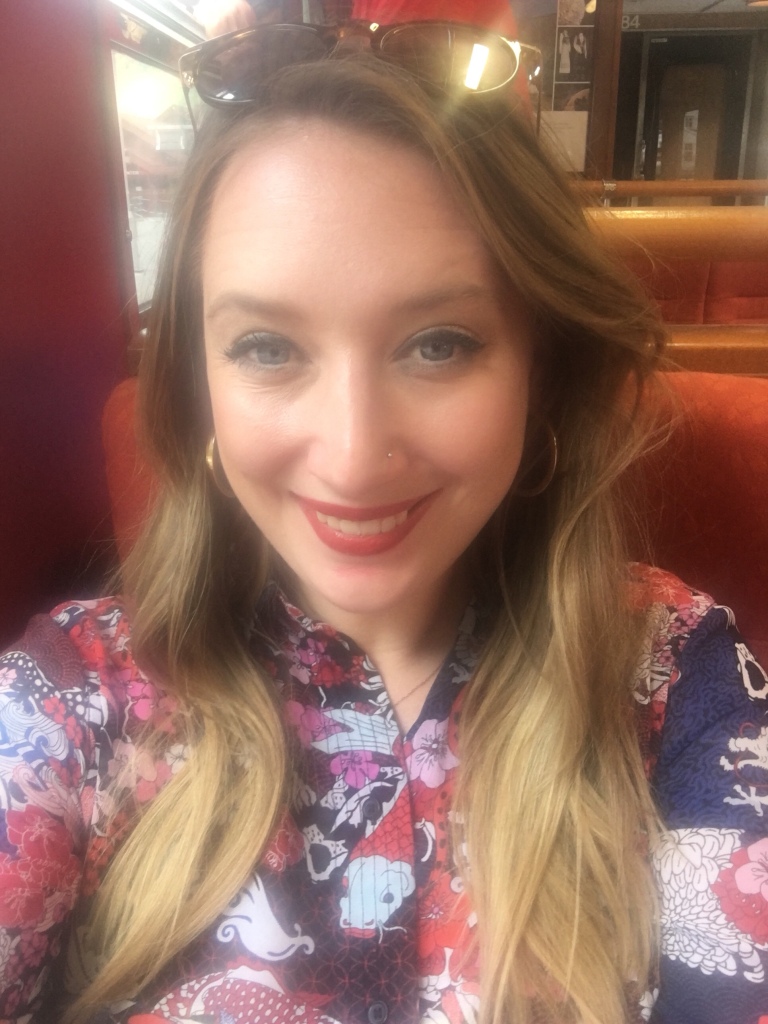 Something that I loved about the train was that it had television screens at the front of each carriage which let you know exactly where we were on the railway and gave lots of interesting facts along the way. Not only do you learn about the history and the geography of the area you also learn about relevant Norse mythology from the area. For example, we learnt all about Huldra, an elusive forest spirit from Norse mythology. According to local folklore, she lures men into the woods to seduce them before taking them up the mountains to their death… I looked out for her, but she must have been other side engaged…

We travelled through beautiful villages nestled within the imposing mountains, dairy farms tumbling waterfalls and grazing fields. It was stunning. 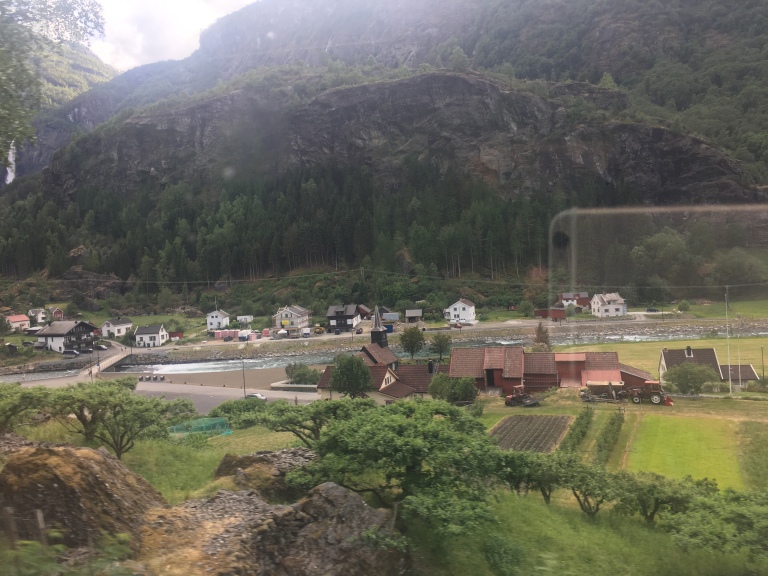 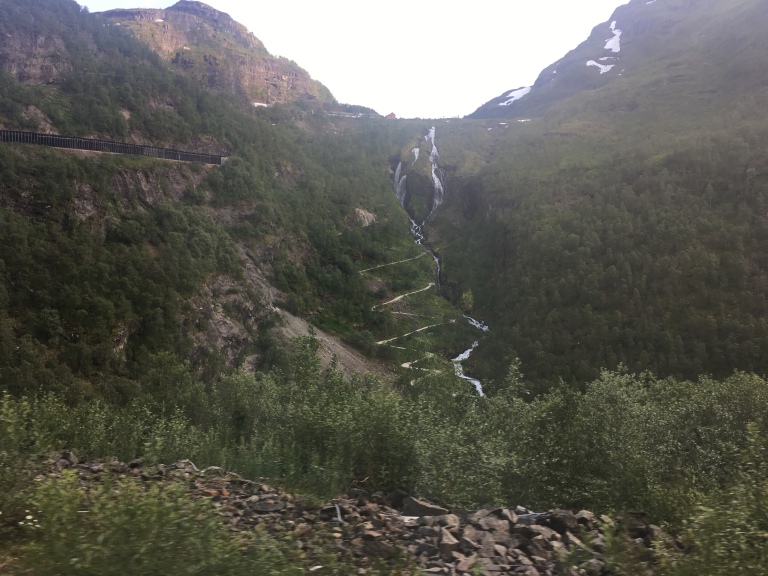 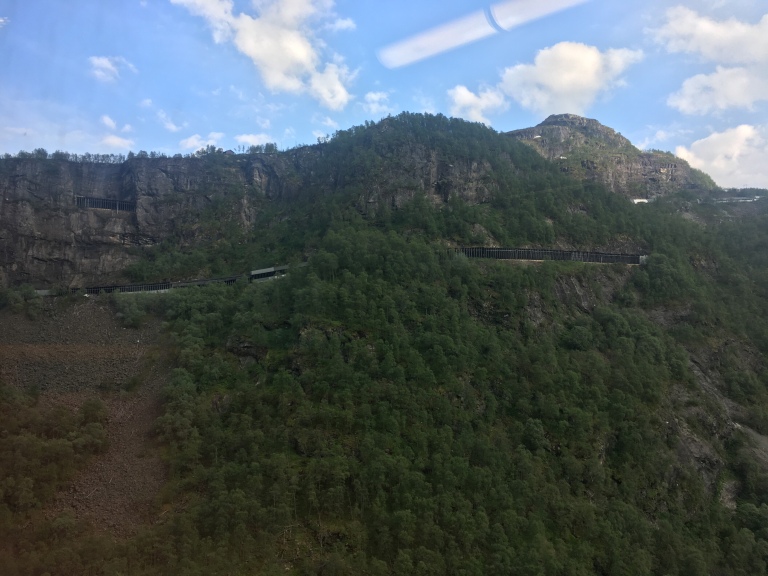 The train soon came to a halt and the conductors walked through the carriages explaining that we were having a 5 minute stop off to admire the incredible Kjosfossen Waterfall. This fall sits at an altitude of 670 metres above sea level and has a total fall of 225 metres. Before visiting, I had heard that the fall has earned the reputation of sounding like thunder. I can totally vouch for that – it was incredible. One tip, if you plan on spending the entire 5 minute break up close to the edge, admiring the falls; perhaps bring a raincoat, or a protective camera case. It doesn’t half get wet! 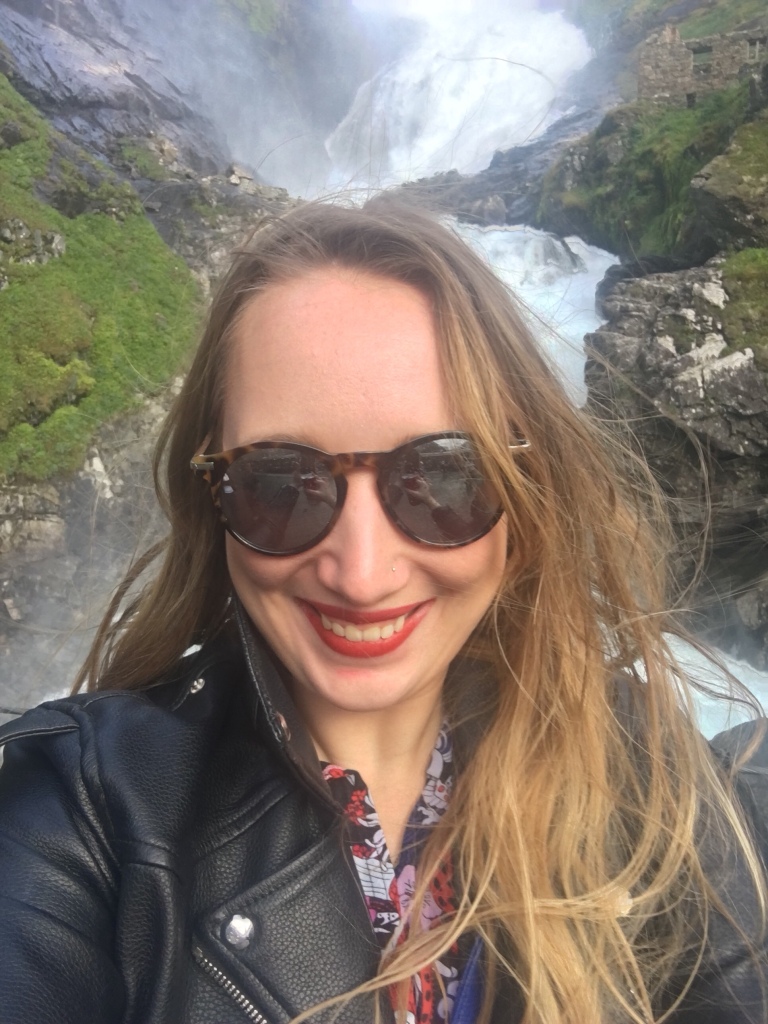 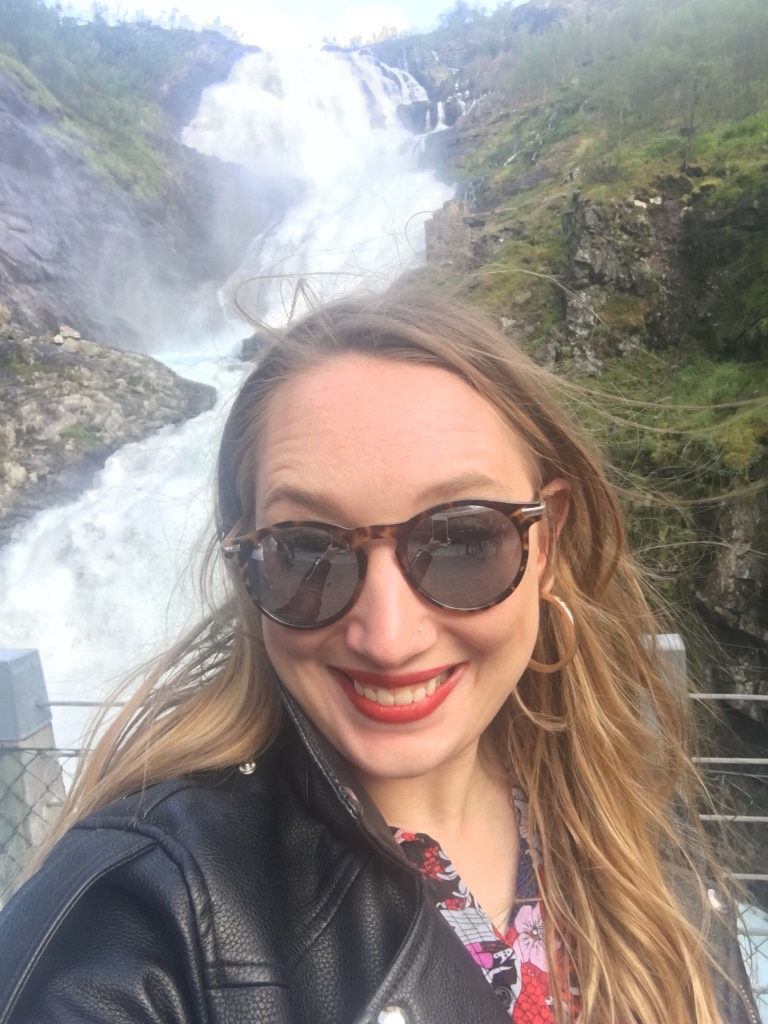 The train journey takes a little after an hour and before I knew it we had pulled up at out final destination – Myrdal, which you can tell is high up in altitude with the dusting of snow across the peaks of it enclosing mountains.

With a little over an hour in Myrdal we had not much else to do apart from enjoy the incredible scenery of this tiny little village. Crossing over the railway line I sat out on the edge admiring the 5 or 6 (!) houses which form the village. What a STUNNING place. 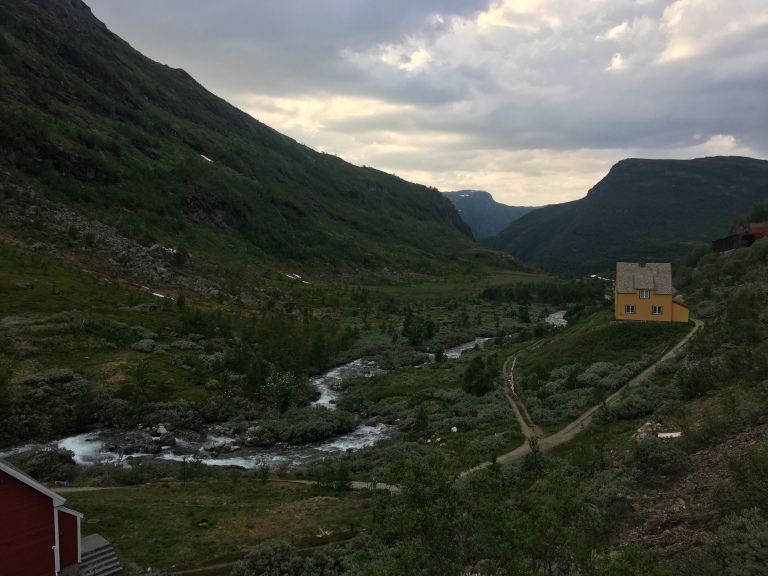 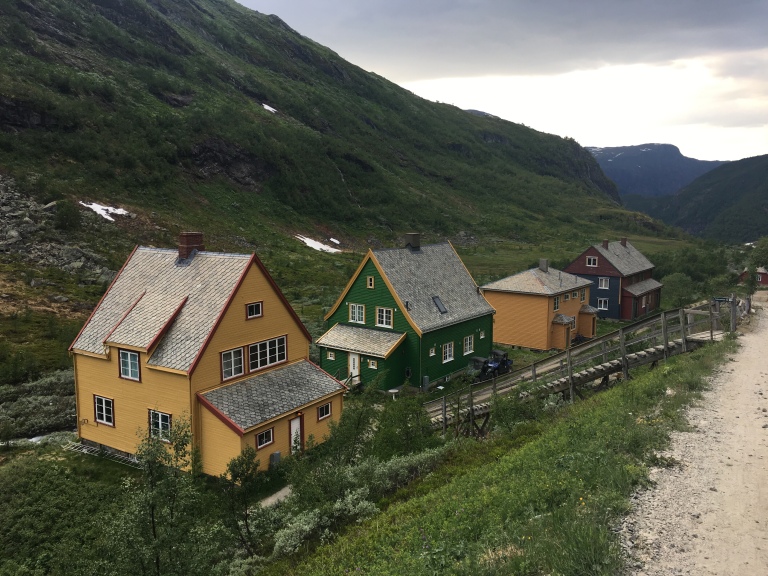 That brought my day to an end, I hopped on the train and made my way back to Bergen. It must be said, I fell a little bit on love with Norway today…!

2 thoughts on “Flåm and Myrdal, Norway”