The morning of my little trip into Bavaria, I wandered into the town and met the bus at the Panorama bus stop, obviously stopping off again for coffee and baked goods en route.

This bus was much smaller than the Sound of Music tour with only 8 of us plus our driver, Walter. Walter was a Salzburg native, but having lived in Australia the past 30 years, he certainly had an interesting twang to his accent!

Walter started off the tour by telling us some interesting facts about Salzburg and, in particular, it’s history with Germany. Something that was really interesting was that we happened to be crossing over into Germany, exactly 80 years to the day (12 March) that the Nazi’s marched into Austria – pretty cool!

Walter explained to us that Salzburg was founded by the Romans in 15BC and created by the merging of different Celtic communities. The city was named Luavavum. After the Roman Empire came to decay, Luavavum was abandoned and fell into ruins. In the year 699 AD St Rupert received the ruins of  Luavavum as a gift from the Duke of Bavaria; it was from this point that the city began to be built uphill. Rupert became the city’s bishop and he launched the St Peter’s Abbey. To this date, he is still the Patron Saint of Salzburg.

The name Salzburg is documented since 755 AD and translates as ‘Salt Castle’ due to the large amount of salt discovered here.

In the 14th century the province of Salzburg finally becomes independent from Bavaria and is an entity within the Holy Roman Empire of the German Nation.

During the 17th and 18th century Salzburg goes through its prime: the Prince Archbishops Wolf Dietrich von Raitenau, Markus Sittikus and Paris Lodron use the wealth from the salt trade to transform Salzburg into one of the world′s most outstanding baroque city with magnificent palaces, churches and garden. In 1816, Salzburg becomes part of Austria, but does not recover economically nor culturally until towards the end of the 19th century. During World War II, a total of 15 air strikes destroy 46 percent of the city′s buildings especially around the station. Up to the present day, duds and bombshells are occasionally found in Salzburg – super interesting stuff! I for one wasn’t aware that not only had Salzburg once been part of Germany, it had in fact been an independent state in its own right.

After heading out of the city we started to climb the alpine roads, before we knew it we had arrived at the German border and the little village of Marketschellenberg. We continued driving round the incredible windy roads and as the mountains popped up in the distance, we knew we had arrived in Berchtesgaden. 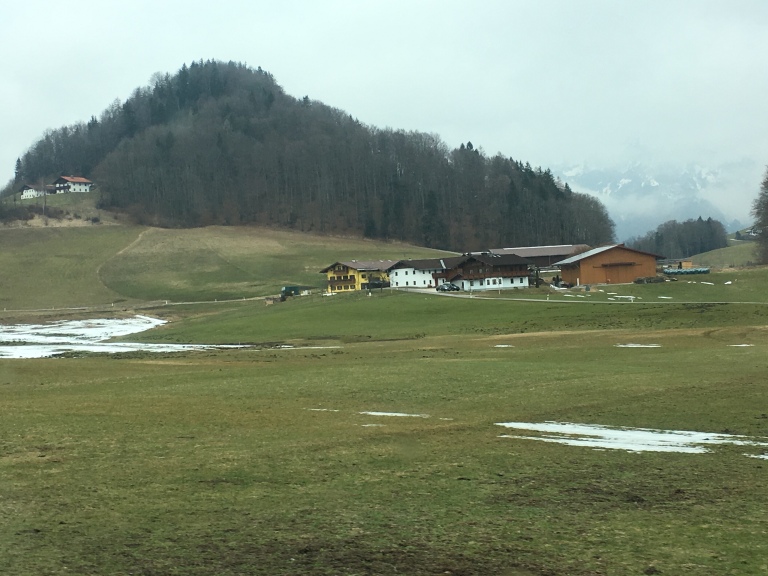 Walter stopped off at the most amazing view point where we literally couldn’t believe the beautiful scenery around us. It was absolutely stunning. We literally just stood there in awe and, of course, took about a million photos. 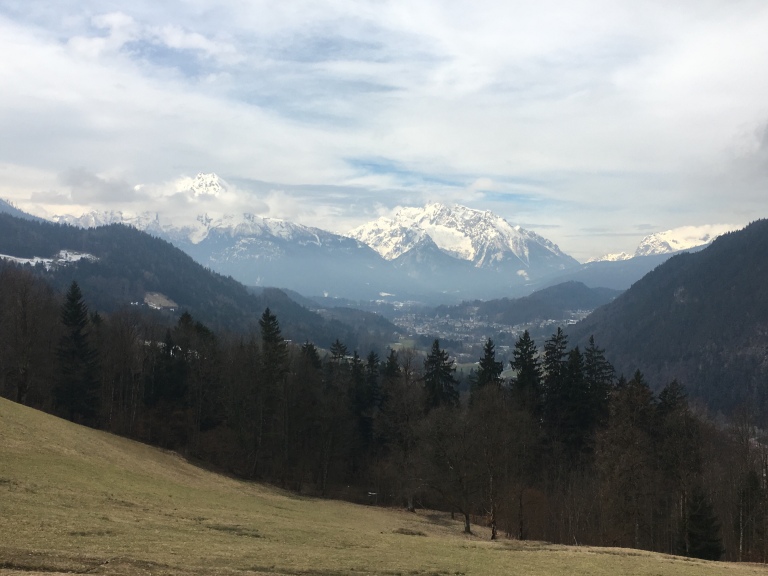 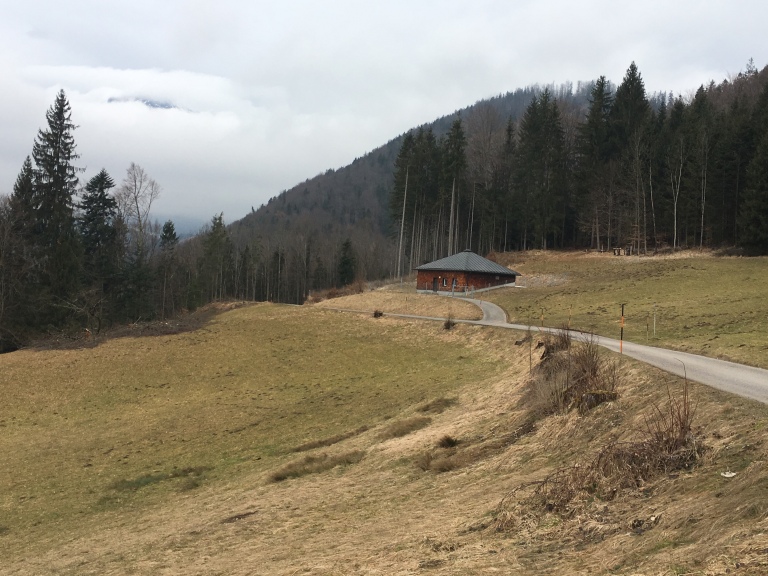 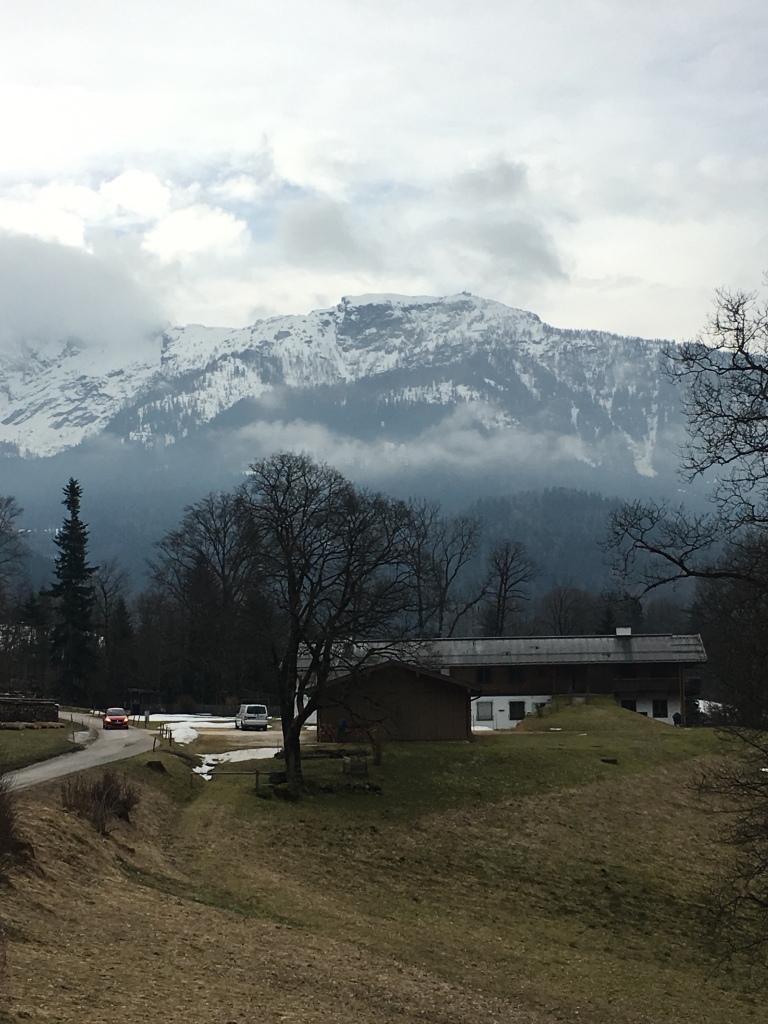 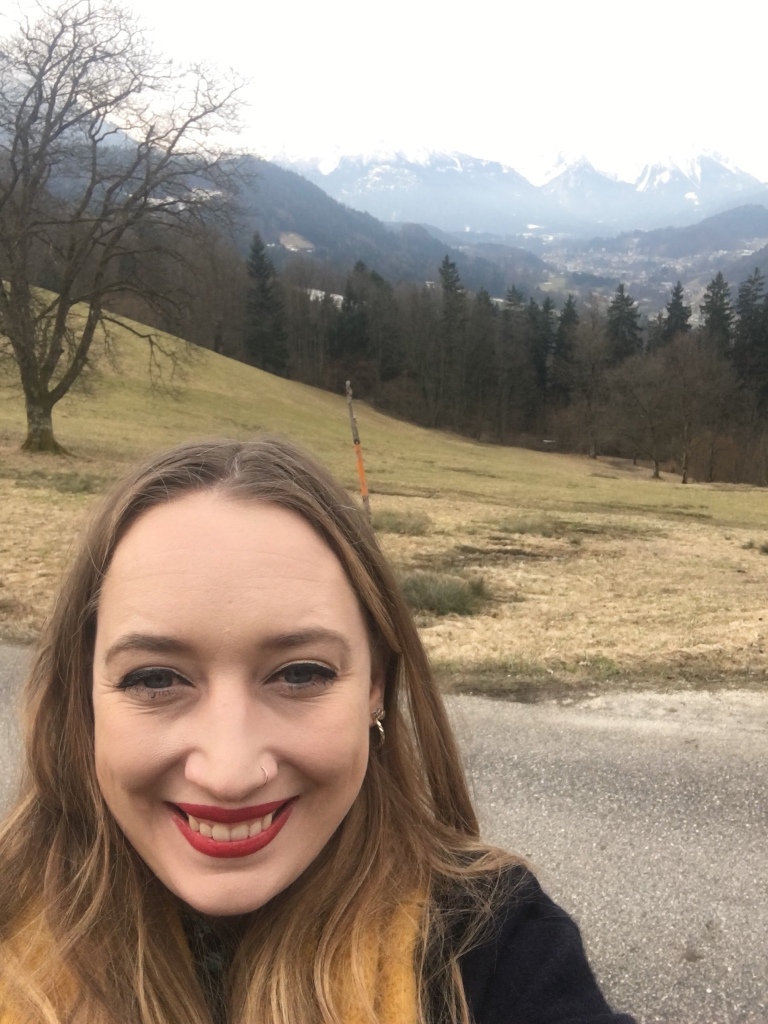 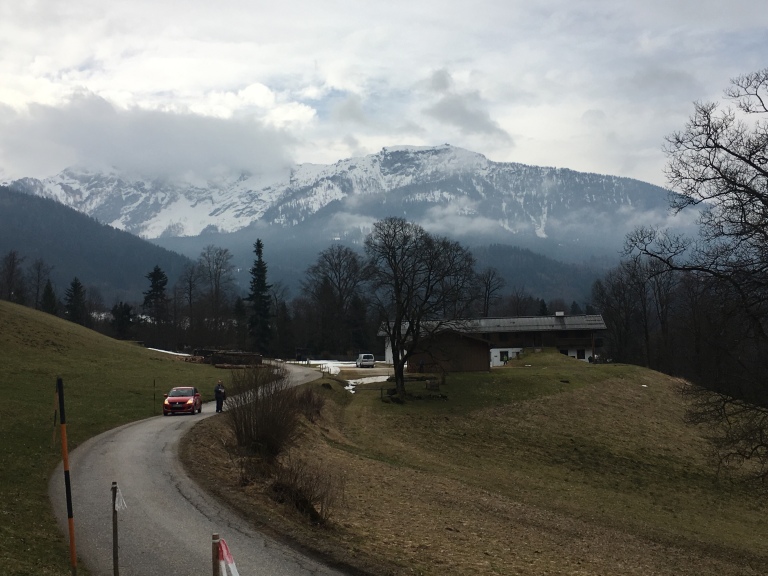 Back on the road again we made our way up further into the mountains where Walter stopped to point out something far off in the distance, right at the peak of the summit of the Kehlstein mountain – the Kehlsteinhaus – aka Hitler’s Eagles Nest.

The project began in April of 1937 and was a gift from the Nazi Party to Hitler, in celebration of his 50th birthday.

Construction of the building on top of a mountain, with its steep access road and a 400 foot elevator shaft inside the mountain, was an ambitious goal, but consistent with the Third Reich’s grandiose building plans. Over 3,000 men worked day and night, winter and summer, for 13 months to complete the project. The road was blasted out of the mountainside, passing through five tunnels to get to the entrance.

No slave labourers were used in the construction; most of the workers were highly paid Germans, Austrians and Italians. The work was very dangerous however; men working on the scaffolding on the Eagle’s Nest were dangling over a 2,000 foot drop! A total of 12 men died during the project.

Interestingly, although it was a lavish gift, Hitler was not a fan of the Eagle’s nest. He had an acute fear of heights, struggled with the thin mountain air and disliked the bad weather – he is actually only documented as visiting it a mere 14 times!

Hitler had his private residence, the Berghof, where he felt more comfortable lower down in the mountain range. He frequently met with prominent foreign and domestic officials here and Walter took us to the exact point where his house used to stand. Walter even pointed out the exact piece of grass where Hitler’s greenhouse used to stand; it’s now a slip road up to a hotel.

The original house was destroyed by bombing in the war, however it’s foundations were removed in the late 50s for fear that it would become a Neo-Nazi shrine.

Something that we learnt the previous day, which rang very true now was a slight artistic licensing in the filming of Sound of Music. In the film, at the last scene, the Von Trapp family escape Salzburg by hiking over the mountains into Italy. Actually, the mountain that was used for the filming was the Obersalzberg mountain, which lead directly here, to the Nazi headquarters! I’m sure that’s not the way the family intended to be a’heading.

Having spent some time on the mountain roads enjoying the incredible scenery, we drove downwards and into the town Berchtesgaden itself.

I decided to have a little wander around the cobbled streets with its crooked, old, little houses decorated with the most amazing coloured murals. I wandered up towards the Hunting lodge which was owned by the Bavarian Royal Family back in the day – it was super interesting! The town was pretty quiet but lovely none the less! Soon the cold got the better of me so I thought I had better go and seek some shelter in the form of coffee and strudel. 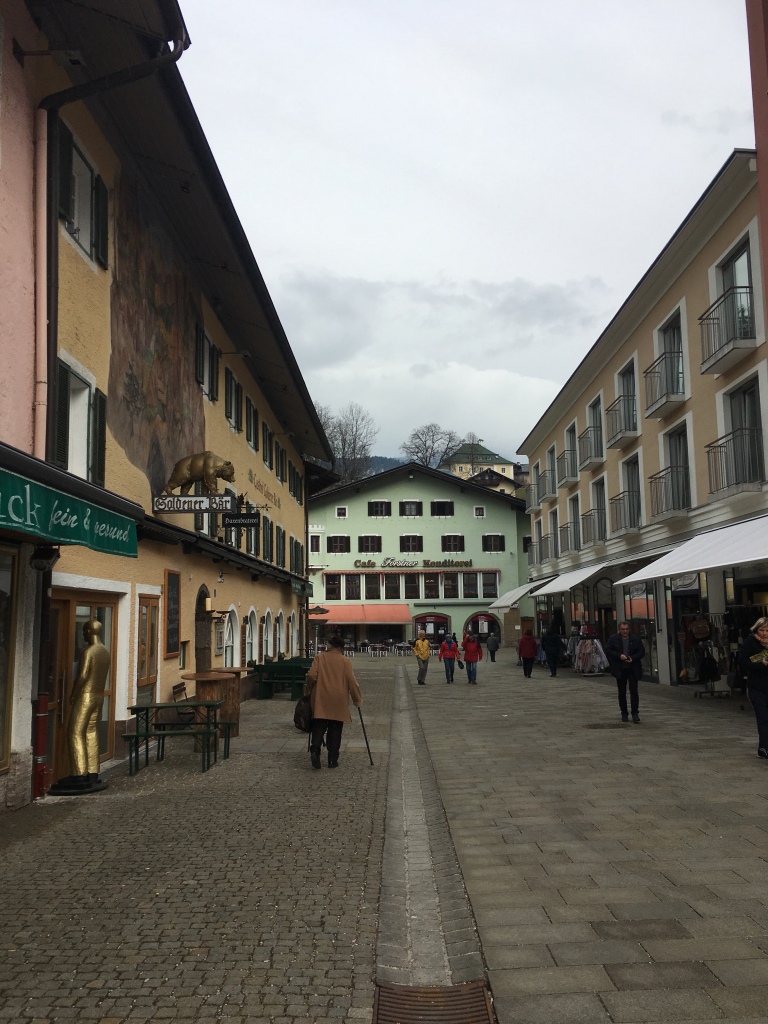 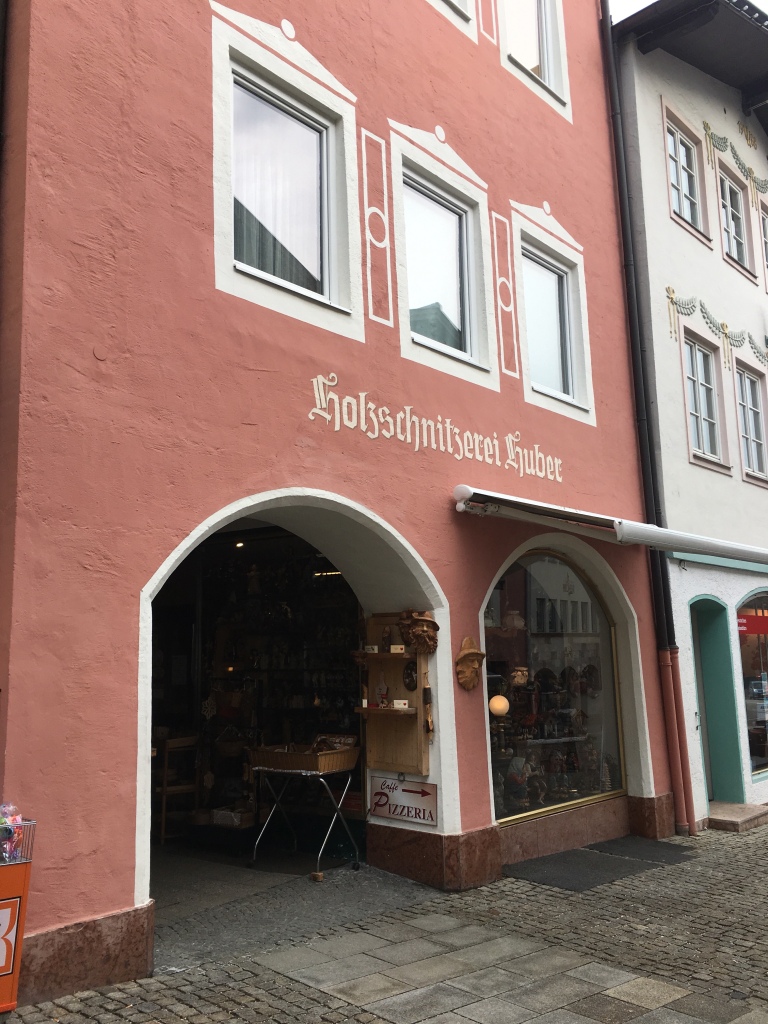 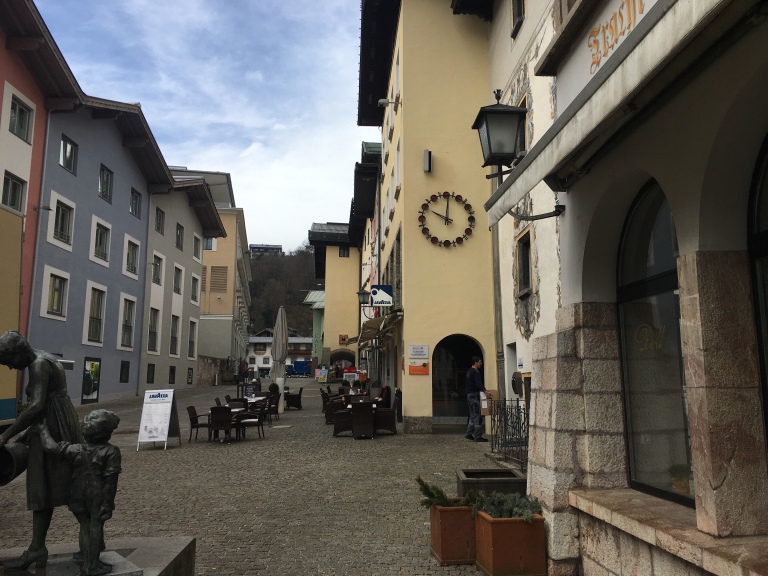 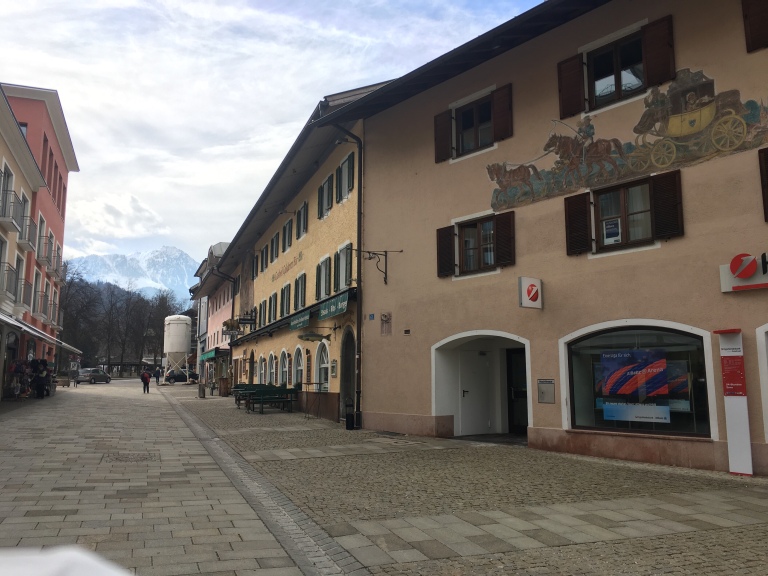 I popped inside and shared a table with the most lovely couple from Toronto; Eshan and Shadna and a lovely lady from Ireland called Cathy. We all were unanimous in our assertion that this particular cafe, the Golden Bear, served the best strudel we had sampled in Austria so far… (apart from the one I made, obvs). 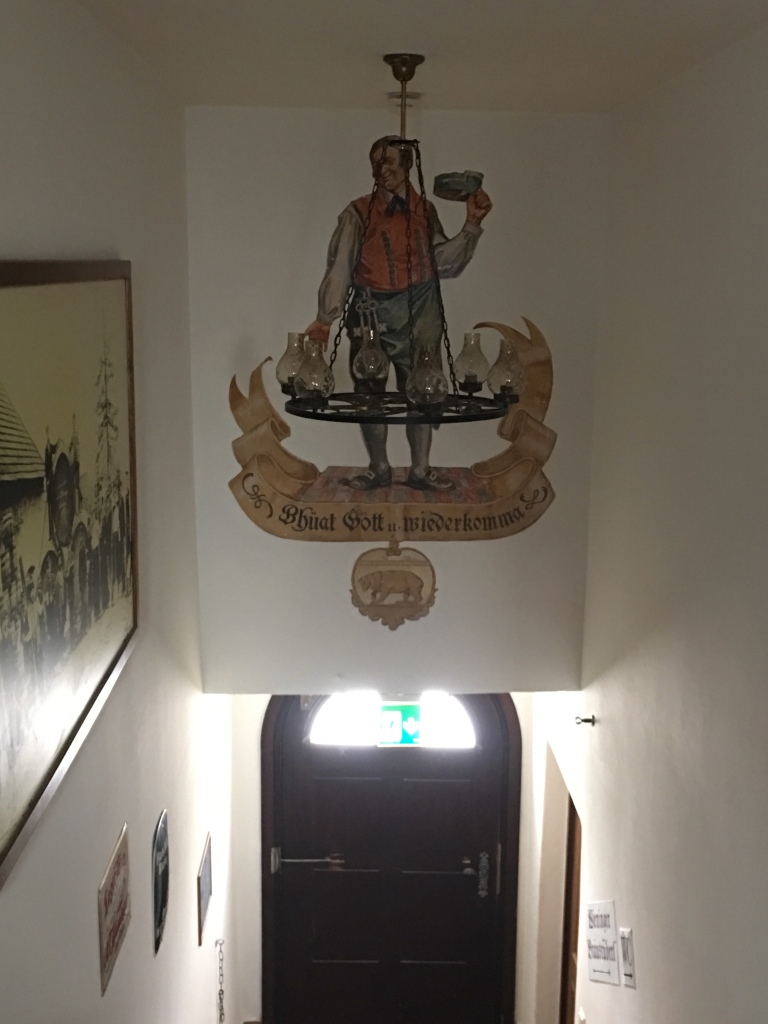 After filling ourselves with all the pastry, we hopped back in the bus and made our way across to Salzbergwerk – Berchtesgaden’s salt mines!

The salt mine tour is a really interesting way to learn about the history, and the geographical ‘bounty’ which made the city of Salzburg, and it’s neighbouring Bavaria the places they are today. After you enter the building everyone receives “mining costumes” which as you can imagine, were extremely dashing…

Everyone is then hoarded into a little tunnel where you board a train which escorts you into the mine. The train is in single file; everyone straddles a centre rail and gets veerrrrrrry cozy with their neighbours.

The mine shaft is very thin. Literally if you reached out hand you would hit the wall. They warn you not to lean over and I don’t think they are kidding about what might happen if you do. The trip down is a little long and I imagine if you were claustrophobic you might find it a little difficult until you arrive in the main area. Me however – loving life. Ha. 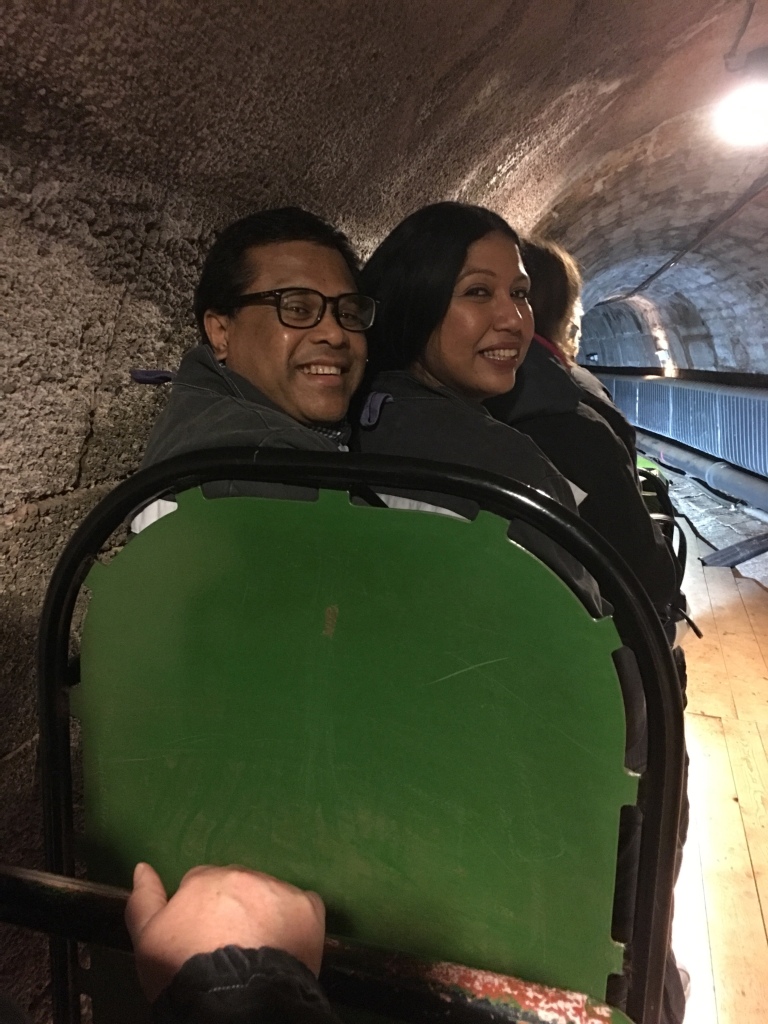 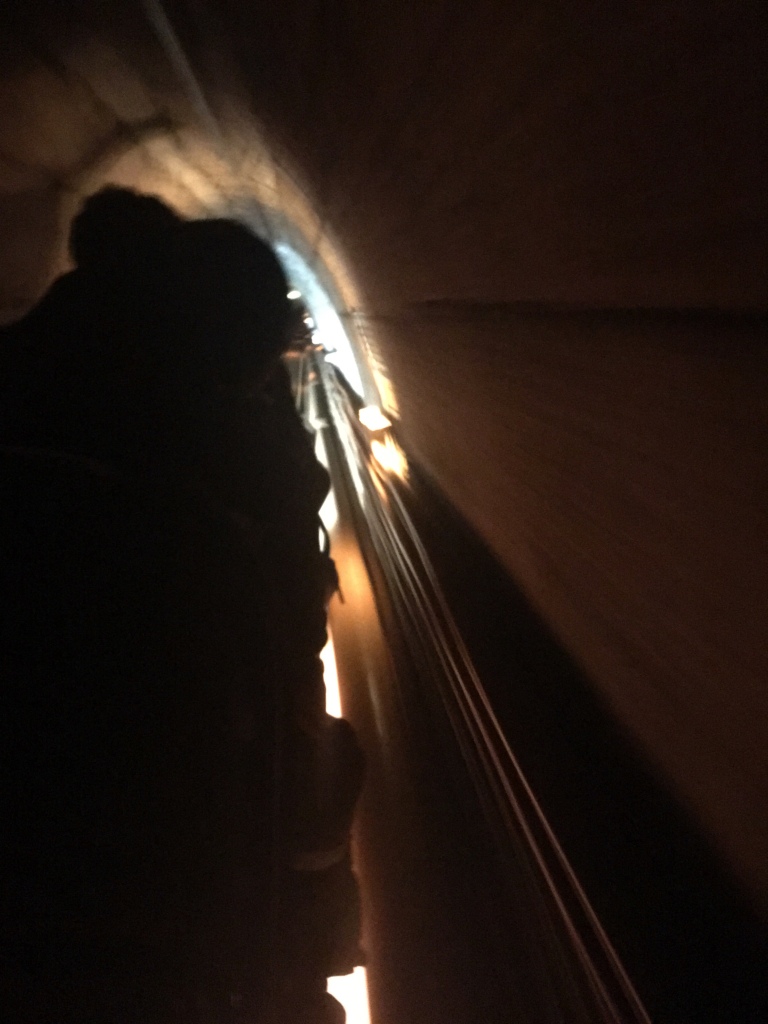 Once off the train, the tour guide lead us through a series of chambers and described the workings of the mine. The mine is still a working salt mine that uses sink holes filled with water. Once in the sink holes, the water then turns into brine as the salt dissolves. Due to a high limestone content in the surrounding hills, all of the streams in the area have a green hue which is really cool. The Brine is then pumped back out of the hole and processed into salt which is used throughout Germany. 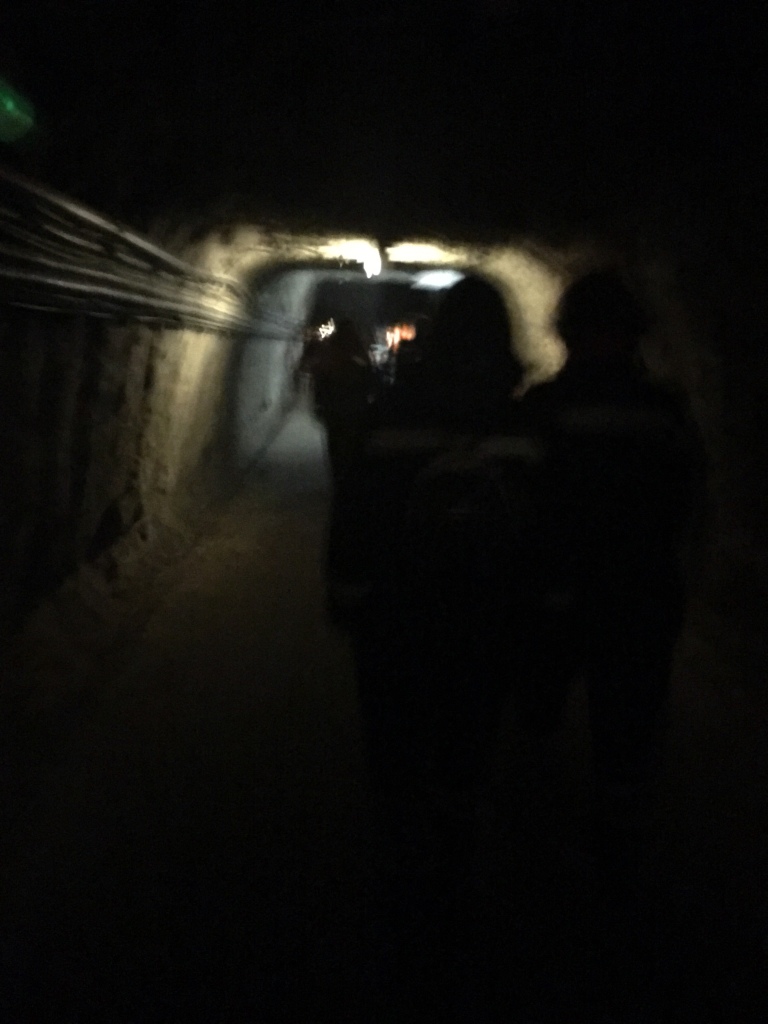 Although I found the information fascinating, the big kid in me was more interested in the slides….. You and a partner straddle a wooden rail that has been sanded smooth, there are two slides in total. The person in back wraps his or her arms around the person in front and then pushes off to slide 50-100 feet down the slide deeper into the mine. This was purely an optional part, the first slide myself and Shadna paired up, but on the second slide we persuaded Eshan to come down with us.

There was also a boat ride across an underground salt lake. This super smooth crossing involved a small light and sound show, against the amazingly clear water. We were offered to taste a little of the salt water; however the funnies part of the day for me was when the guy in front of me, not fully grasping  ‘to taste’, took a whole mouthful of the incredibly salty water… I think he was regretting that for the rest of the day 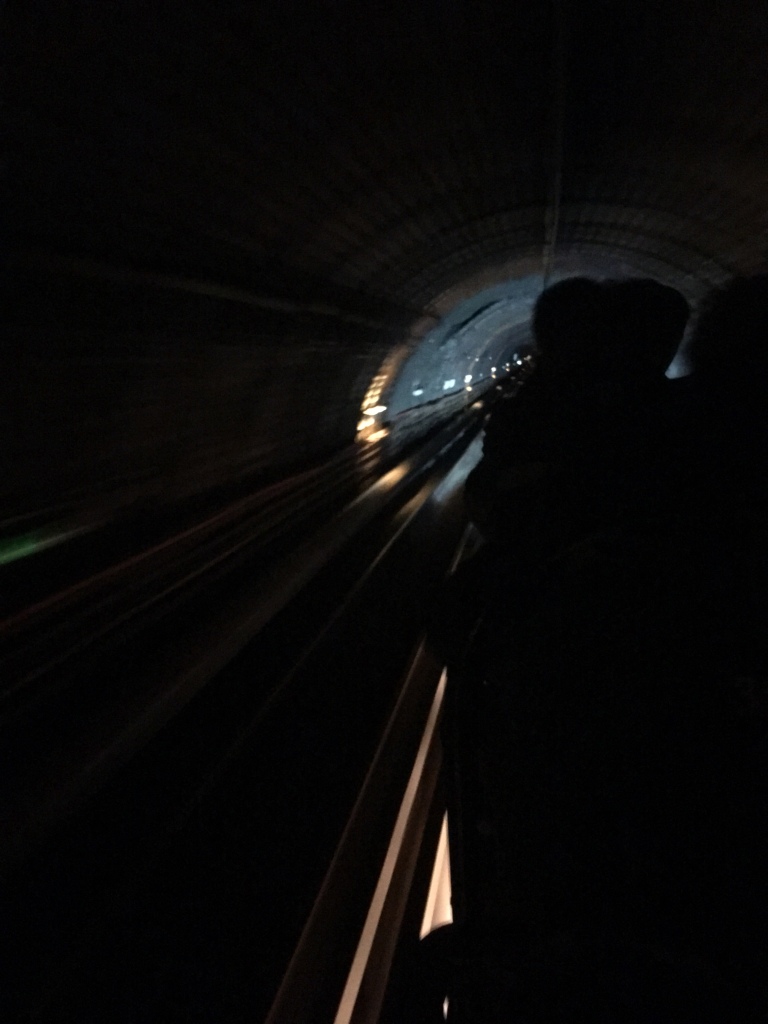 Having hopped back on the train we made our way back to surface level, where we of course couldn’t resist a photo with Walter before making the drive back to Salzburg.

The tour from Salzburg to Berchtesgaden is a half day tour and I really couldn’t recommend it more – it was so interesting and also really cool to venture into an area of Germany I had never been. That afternoon I would be heading to the Salzkammergut; the lake district of Austria. I decided to warm up with a big bowl of onion soup and some Goulash beforehand however… well, when in Salzburg right?