The drive from Healesville to the mouth of  the Great Ocean Road takes a little over three hours; it’s not possible to get bored, however, the scenery is beautiful! We took a little stop off en route at the town of Lorne where we braved the elements to watch the fishermen out on the pier. We may have been a little windswept by the end of it but it certainly woke us up from any lingering Yarra Valley hangover… 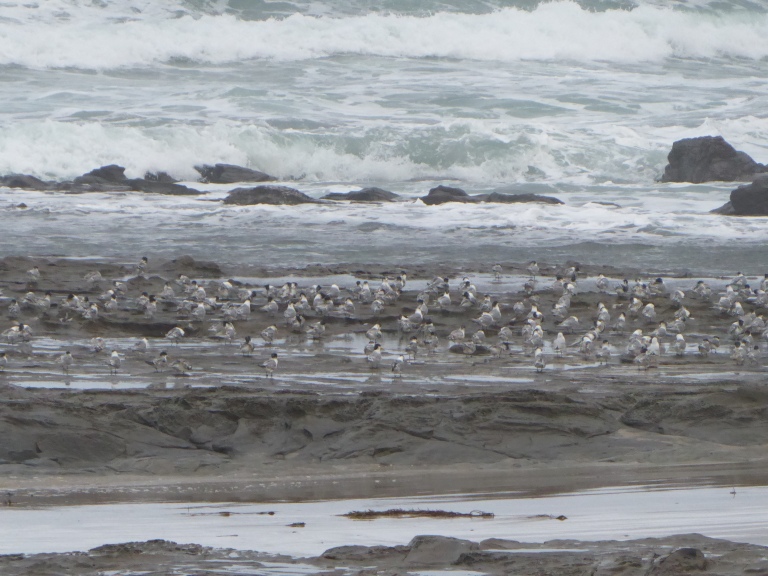 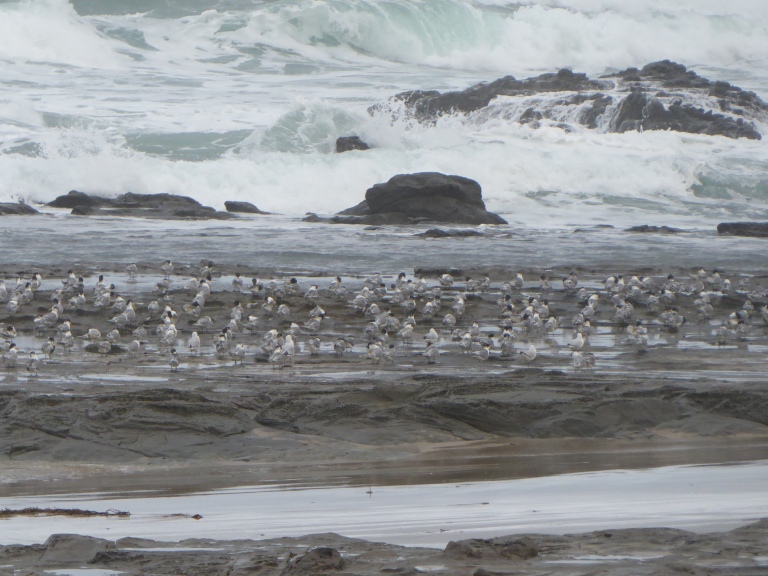 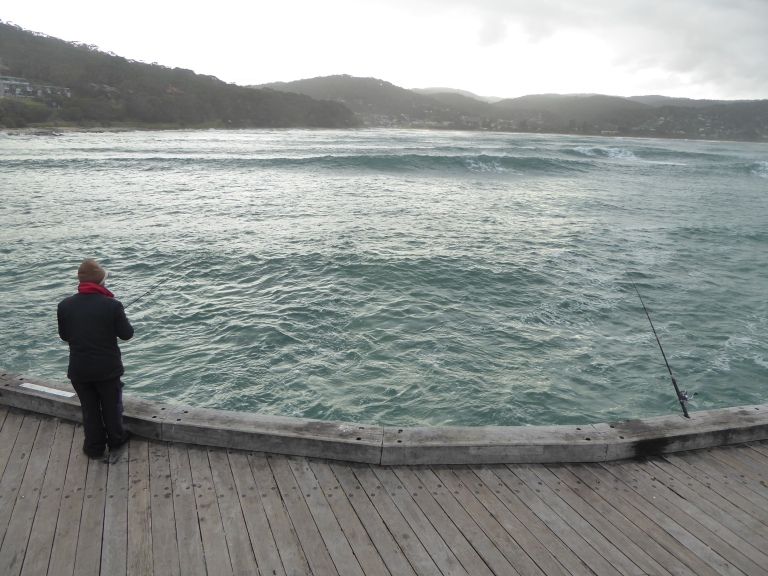 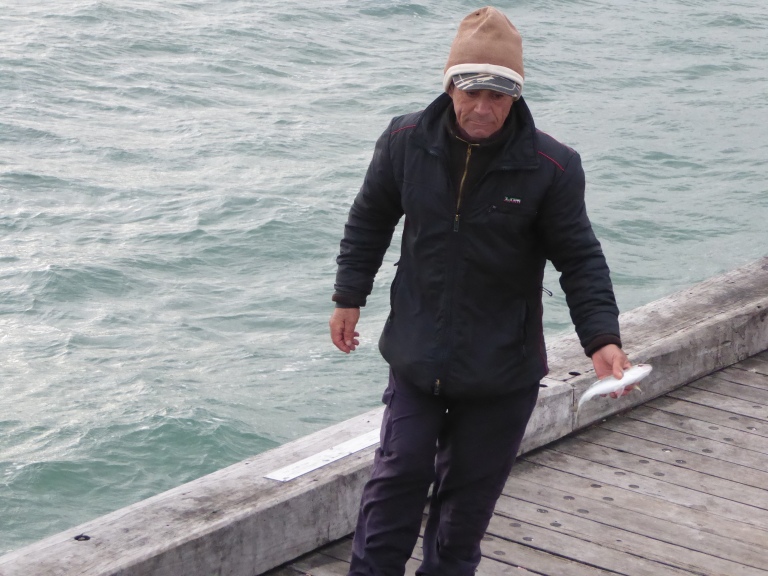 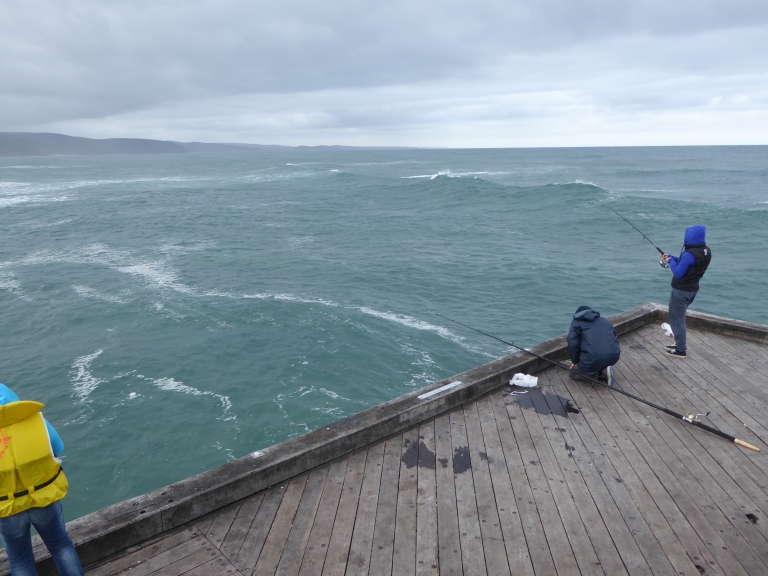 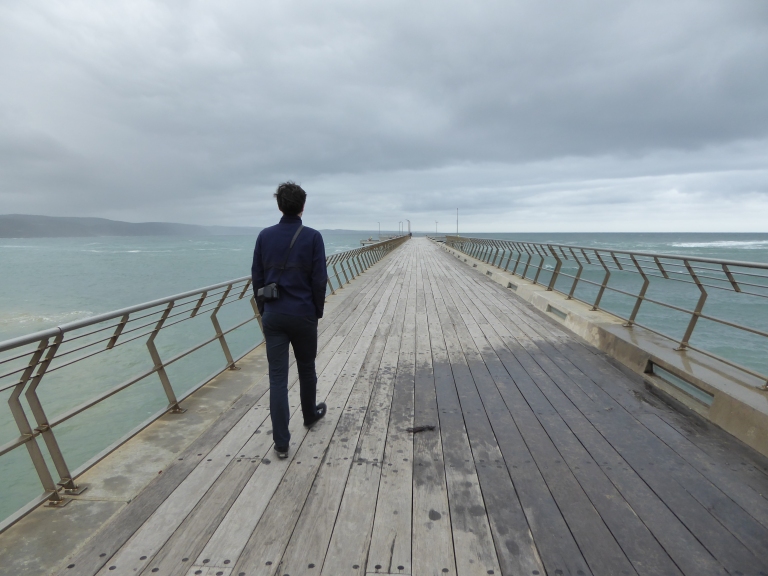 Now at the start of the great Ocean Road,  we checked into our accommodation for the evening, the Big 4 Holiday Park at Wye Valley. We parked up the van, had a little wander around the area, before settling outside and enjoying a couple of gin and tonics and a few games of cards. 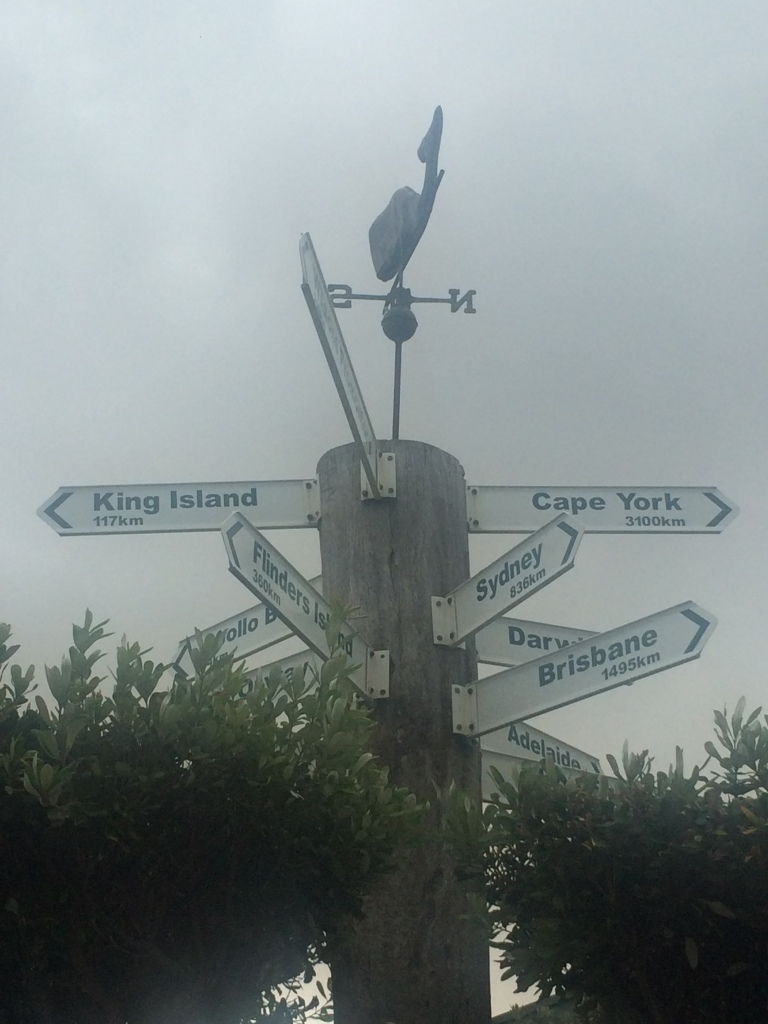 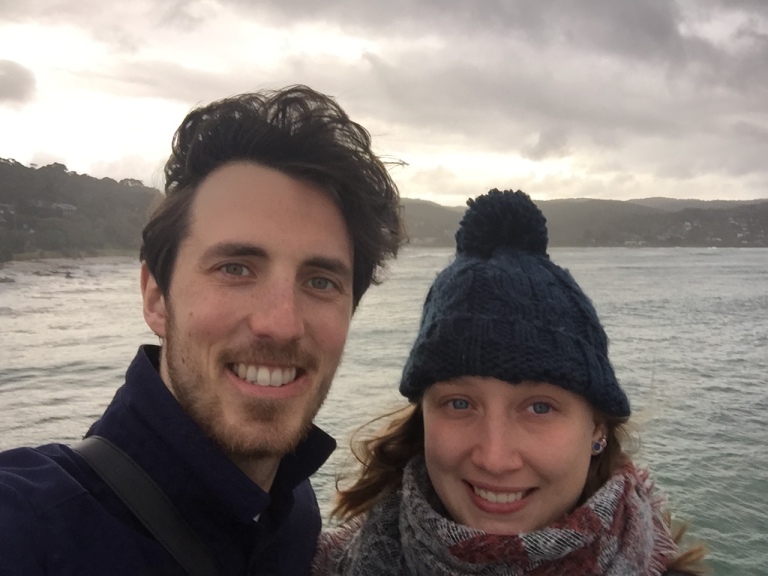 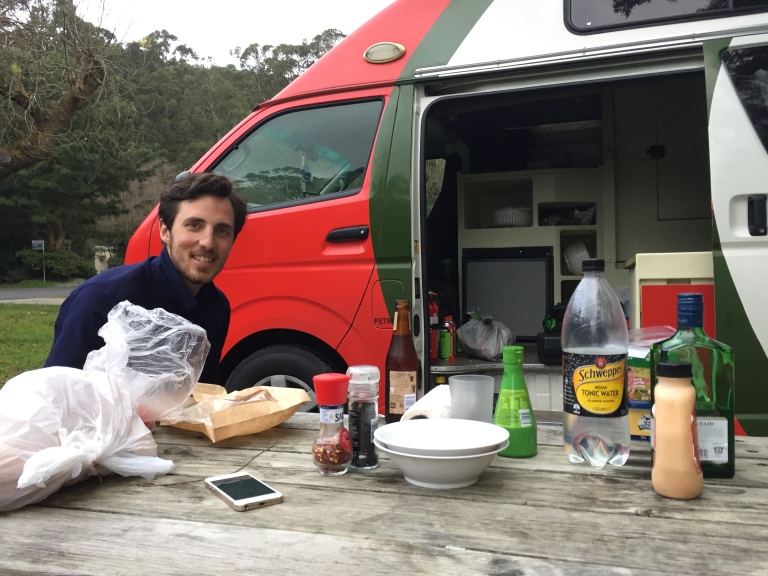 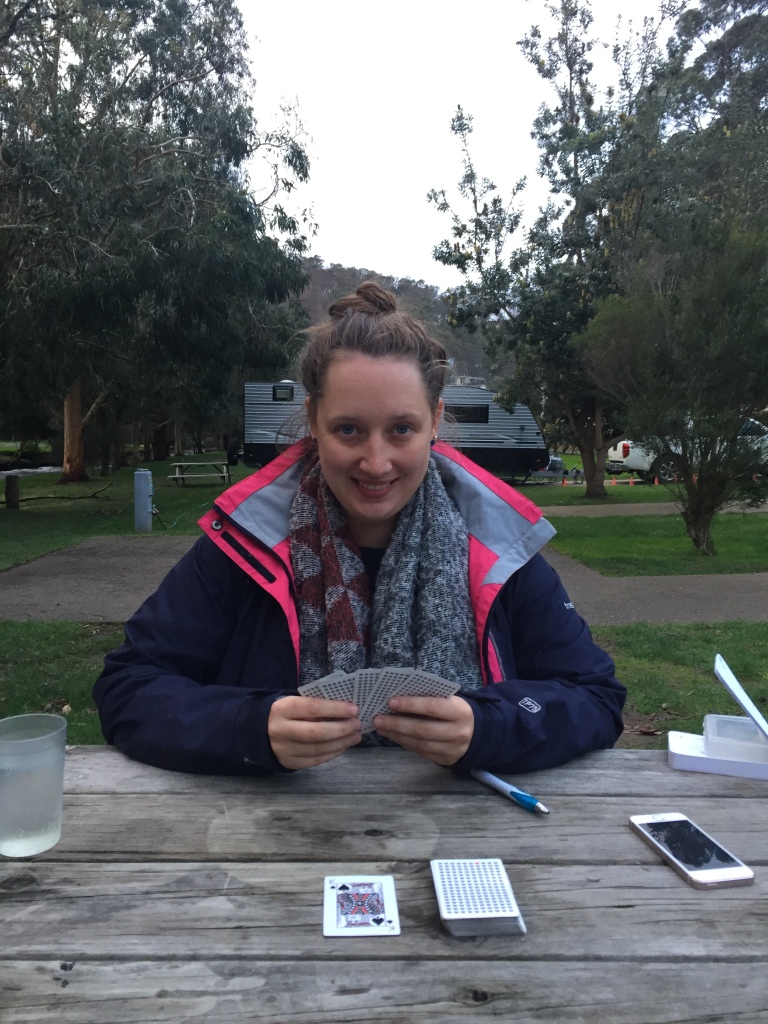 That evening we cooked up a storm in one of the kitchens and enjoyed a delicious feast of vegetable rice and quiche – it’s funny how when backpacking, the simplest meals can seem extravagant! We ended up playing a few more games of cards in the van before tucking down for the night and having a fantastic night sleep. 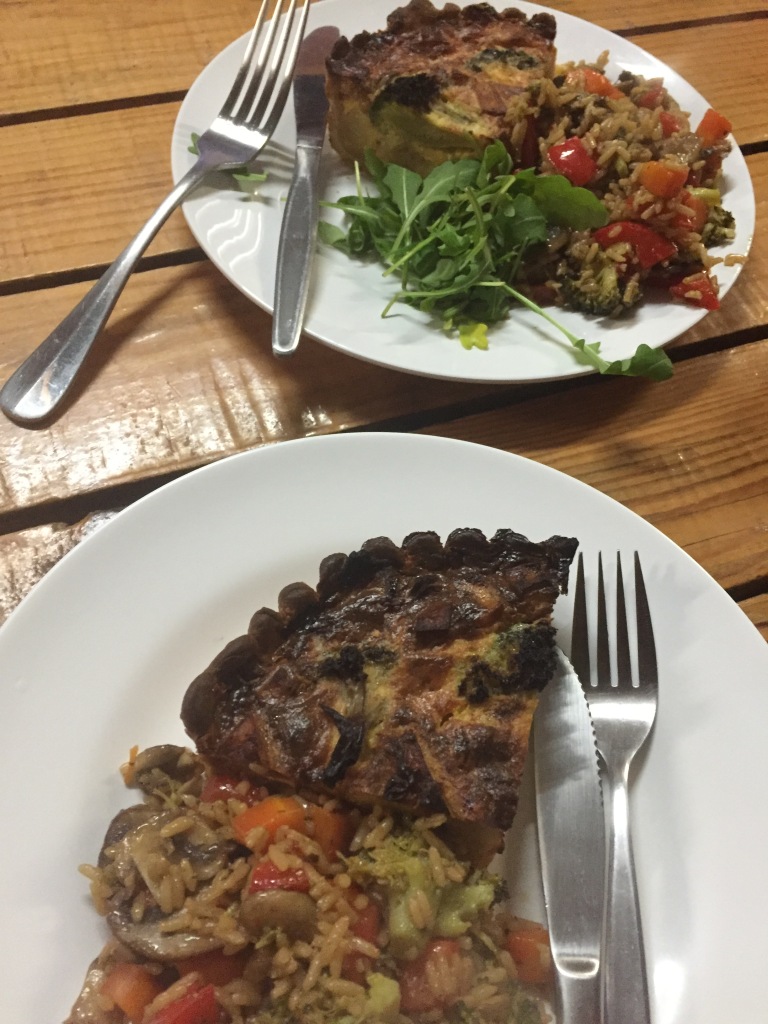 The next morning, we woke up bright and early and picked up delicious coffees from the Wye General Store which were EXACTLY what we needed. We had an exciting day of driving ahead of us today, ready to see the most famous landmarks on this famous coastal roadtrip mecca. Unfortunately the weather really wasn’t fantastic during our drive, strangely enough however we witnessed a wild fire up in the cliffs which was pretty scary! 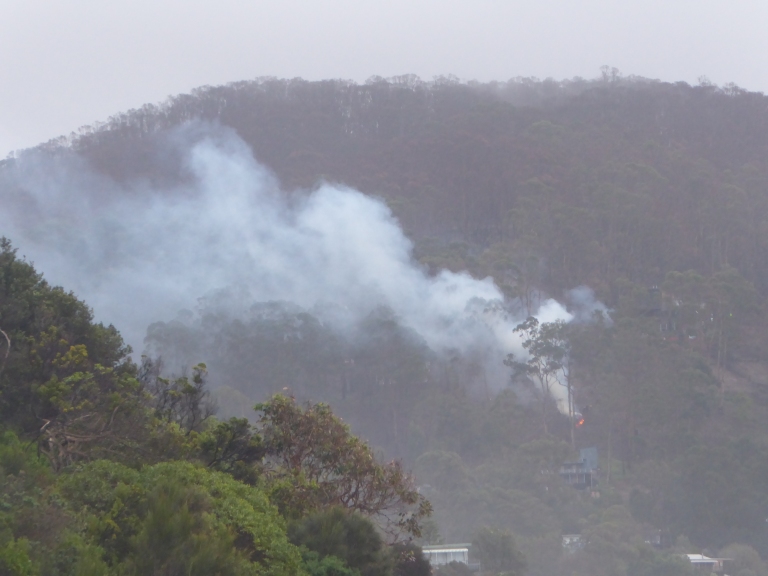 The Great Ocean Road, straddles the coastline of Victoria from Torquay to Allansford, a beautiful 250 km stretch of drive with a stunning outlook the entire way.

The Great Ocean Road was first planned during the end of WW1 when Country Roads Board chairman William Calder wanted to create jobs for returning soldiers. Construction began in 1919 and was done by hand by more than 3,000 soldiers.

They built the road as a war memorial for their fellow soldiers and servicemen who had died in the war, a road which took more than 10 years to complete. Because of the dangerous nature of the work which involved working with explosives, several workers were killed on the job and the road has gone down in history as one of the most perilous projects of the 20th Century.

We had a couple of hours drive ahead of us this morning which was all part of the experience. The scenery in this area was completely amazing, even if we weren’t particularly lucky with the weather. We had a great playlist all set up in the van and enjoyed our last day behind the wheel of the camper. This stretch of road really reminded us of the scenes we witnessed on Route 1, The Pacific Coast Highway in California, a couple of years earlier! We’ve been pretty lucky to be able to visit both of these incredible drives in such close succession. 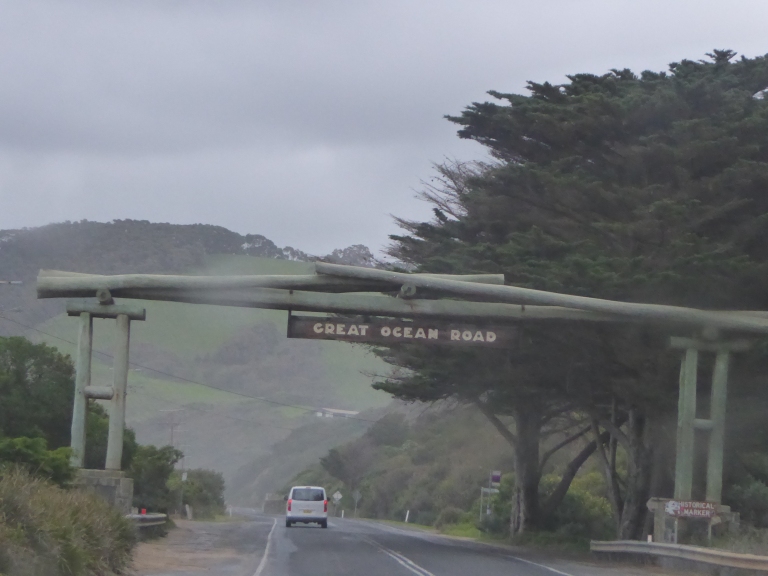 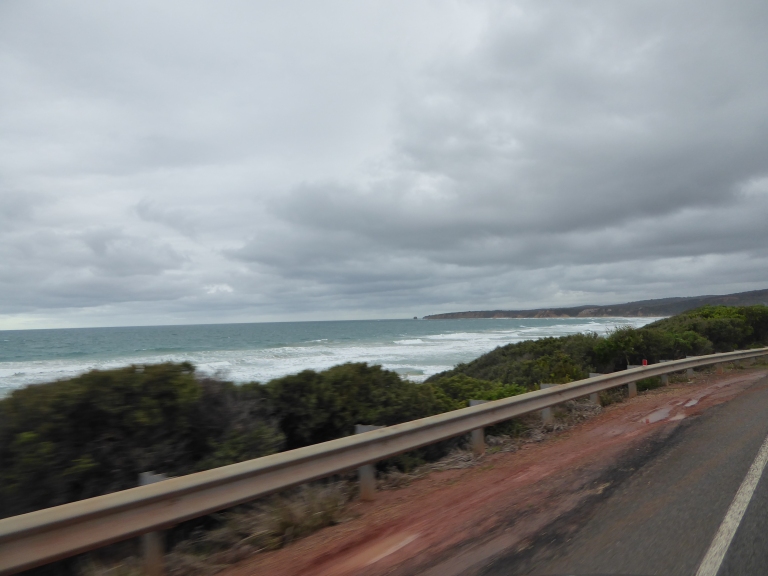 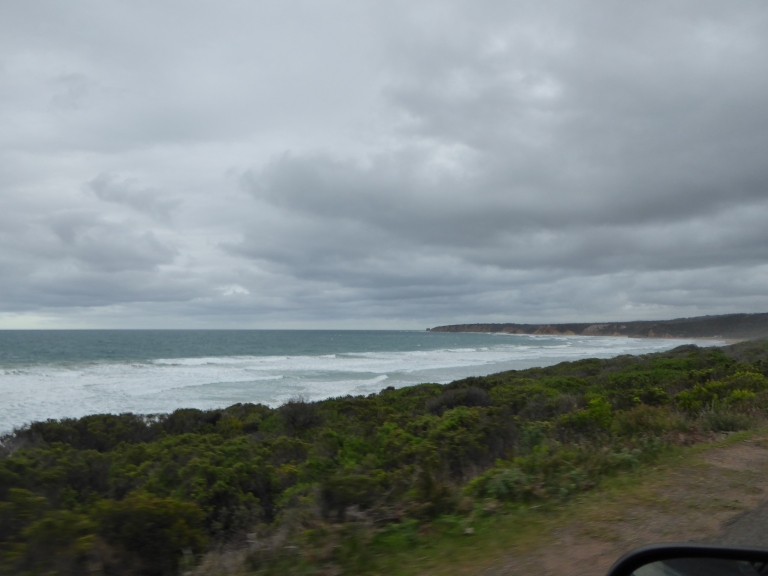 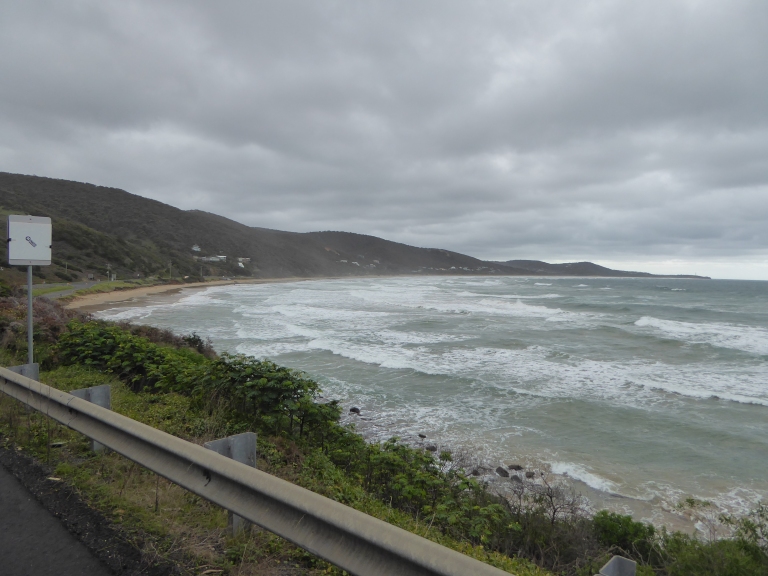 Around mid morning we arrived at the visitor centre, ready to visit the most well known landmarks of the Great Ocean Road – the 12 Apostles!

Wind and wave erosion have acted like a sculptor in gradually whittling the soft, limestone landscape here. Beginning 10–20 million years ago, the stormy Southern Ocean gradually eroded the softer limestone, forming caves in the cliffs. The caves eventually became arches and when they collapsed rock stacks up to 50 metres high were left isolated from the shore. After a pounding

This natural process of decay is still happening at a rate of about 2 centimetres per year. When they were christened the 12 Apostles by Victorian tourism in the 1920s, there were only nine in the cluster. Now there’s eight. And with the rapid rate of erosion, it is forecast that this number will reduce even further. 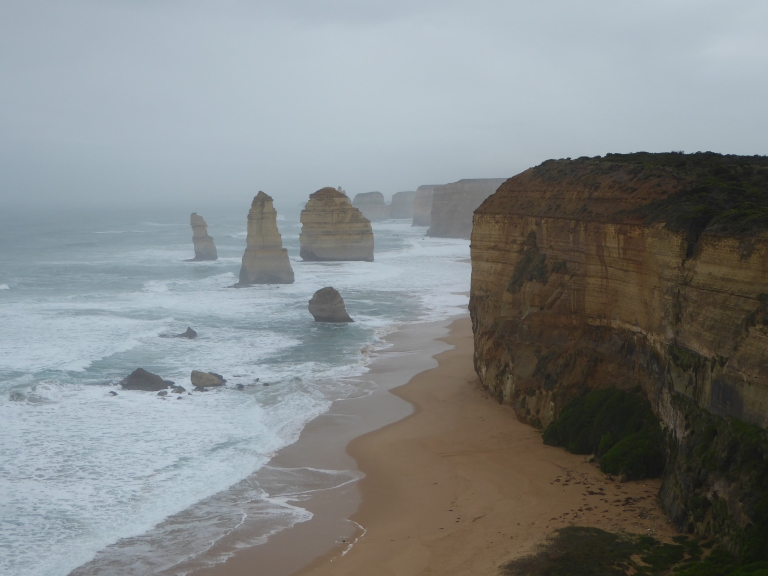 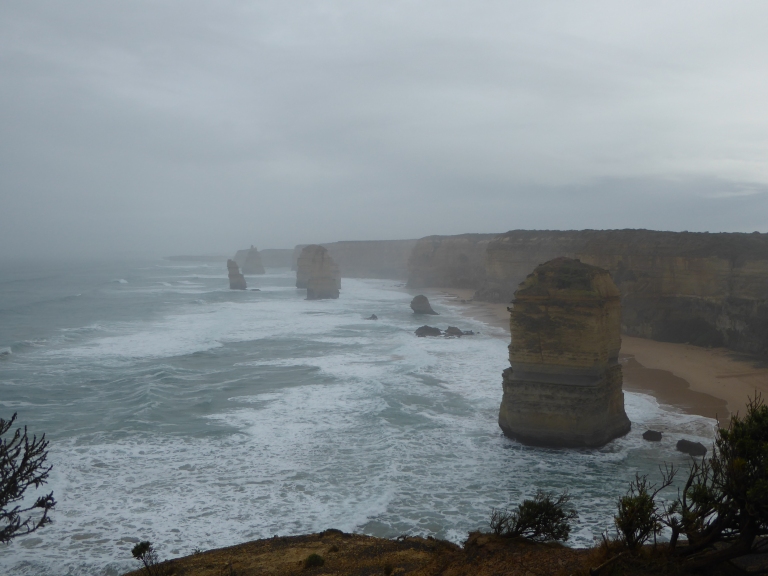 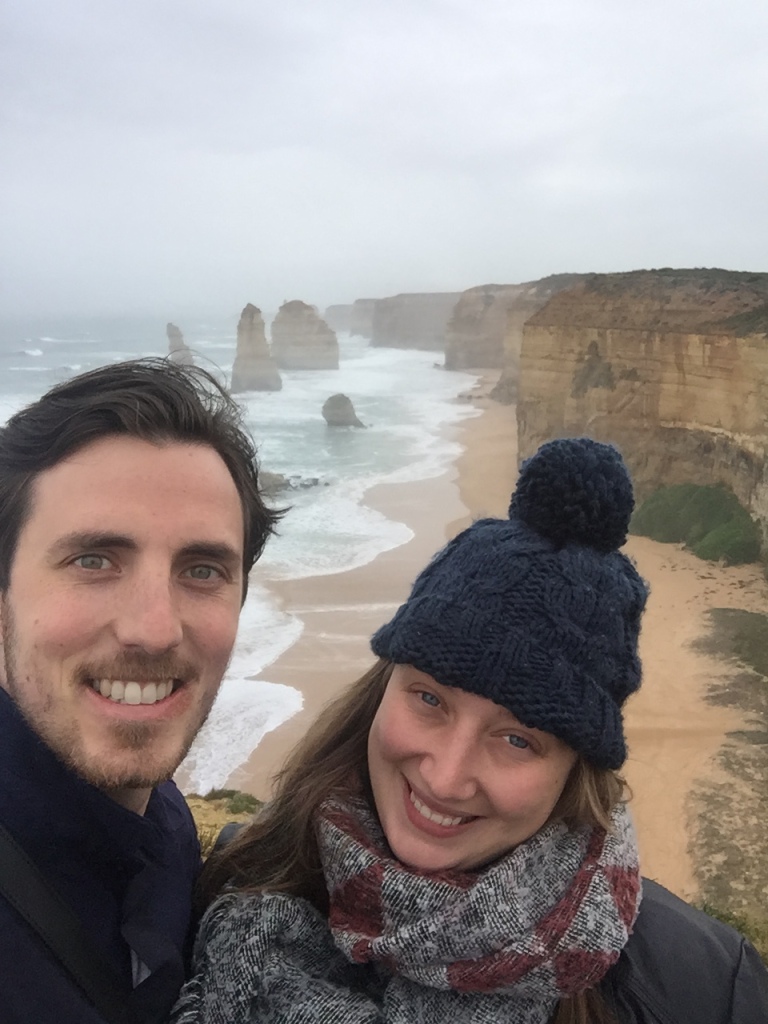 Visiting the 12 Apostles is a really pleasant little experience – there’s a little visitors centre and cafe where you can learn about the geology of the area, before you begin the short walk down to the cliff edge to witness the beauty for yourself – just be careful of snakes!

The great thing about this area of the Great Ocean Road is that the 12 Apostles, even though the most well know, are not necessarily the most impressive sites to behold – the area is full of beautiful rock formations all within short distances of each other which make a perfect day trip. We couldn’t wait to get exploring. Even if we were a little cold….!

Moving on from the Apostles, we hopped back in the car and drove the short three minute distance across to Loch Ard Gorge. It’s a short walk down from the car park to this stunning Gorge which although is home to a smooth, pearlescent bay and an inlet of clear, blue water. It’s flanked by two yellow-washed cliff faces and tufts of vibrant greenery. Though it looks like something out of a storybook, Loch Ard isn’t just a pretty face. In fact, it has an interesting and colourful history that spans back hundreds of years. 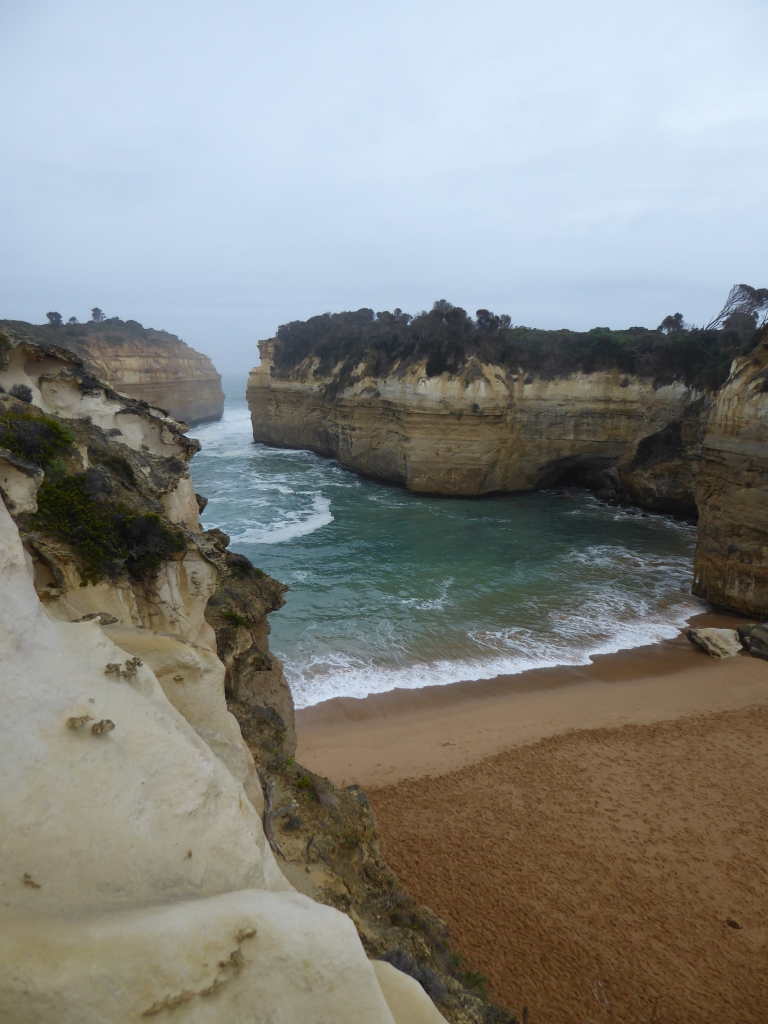 On March 2, 1878, the Ship, the  Loch Ard departed England destined for Port Phillip Bay in Melbourne. The ship was under the command of 29-year-old Captain Gibbs and was full to its capacity of 17 passengers, 37 crew and cargo when it collided with a rocky reef close to Mutton Bird Island, near Port Campbell. Tragically, only two of the people on board survived the accident: one of the ship’s apprentices named Tom Pearce and a young female passenger named Eva Carmichael who had travelled to Australia with her entire family to begin a new life.

During the journey (on June 1, 1878), there was much excitement aboard the Loch Ard as the Captain and passengers were expecting to see land — the coast of Victoria. However, the ship had sailed into a dense fog and, when this lifted at 4am, Captain Gibbs discovered that the ship was much closer to the cliffs of Victoria’s west coast than anticipated. Ordering as much sail to be set as possible, he desperately tried to turn the ship out to sea but the ship soon lost momentum, with its sails falling limp and its bow swinging back. The anchors were dropped but failed to hold and the Loch Ard was tossed and pulled. Despite the frantic efforts of the Captain and the crew, the Loch Ard connected with a reef connected to Mutton Bird Island.

Tragically, efforts to successfully launch lifeboats were thwarted by treacherous conditions and many passengers and crew drowned. Tom Pearce had attempted to launch the first lifeboat and was able to hold on to its overturned hull and use it for shelter. He drifted out to sea and came into what is now known as Loch Ard Gorge. Despite being bruised and dazed, he swam to shore and sheltered in a cave.

Shortly before being swept off the ship by an enormous wave, Eva Carmichael had encountered Captain Gibbs who said, “If you are saved Eva, let my dear wife know that I died like a sailor.” Eventually, being carried into Loch Ard Gorge after five hours in the water, Eva attracted the attention of Tom Pearce who swam to her rescue and brought her to shore. Eva was unconscious, but a case of brandy that had washed onto the beach helped to revive her.

Two men from the nearby Glenample Station eventually assisted Tom and Eva. Tom received a hero’s welcome in Melbourne and, after six weeks, Eva returned to Ireland, having lost all of her immediate family in the ship wreck. Members of the public had been intrigued with the story and were upset when the two went their separate ways.

The trip to Australia in 1878 was the fifth and final voyage of the Loch Ard, which had previously made three trips from England to Australia and one to Calcutta. 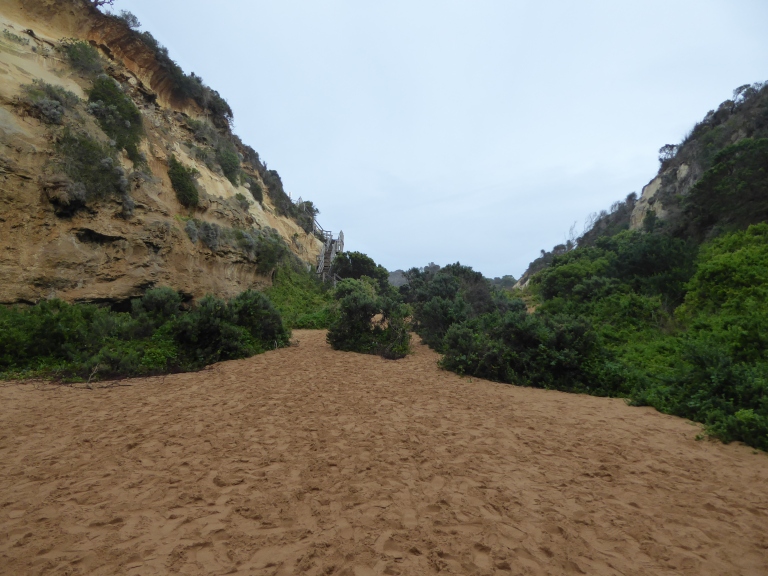 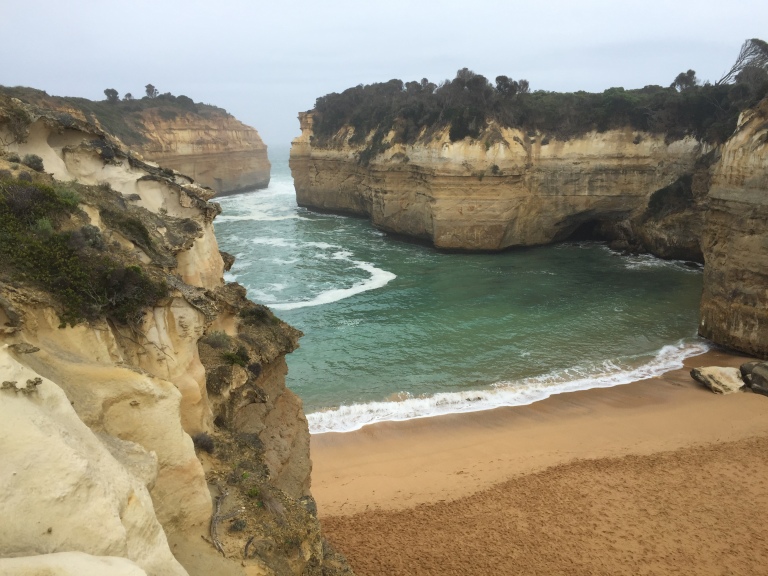 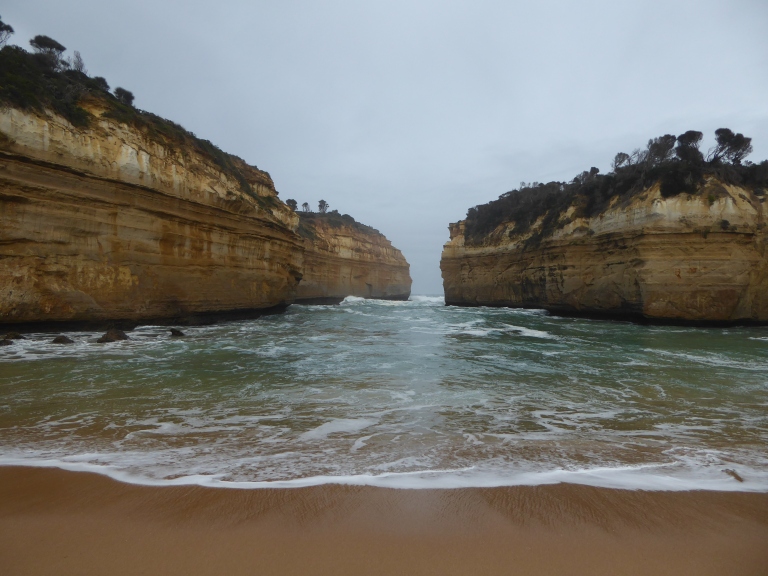 The nearby Island Archway, which once formed a natural bridge over the gorge, fell down in 2009, leaving two unconnected rock pillars guarding the frothing sea. The two pillars have been affectionately named Tom and Eva.

Although plighted by a sad history, the gorge was a really interesting place to visit and still, was a really naturally beautiful phenomenon. 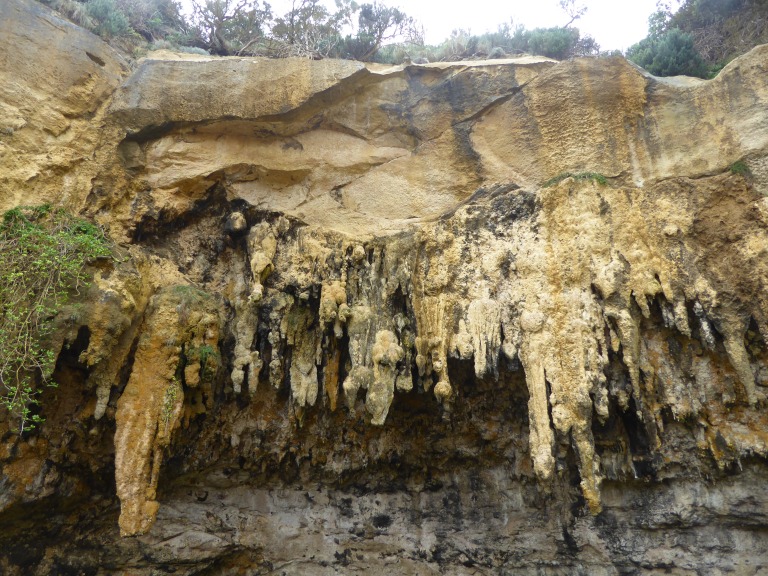 Having left the gorge, we hopped back in the van and made our way to our last stop off in the area – ‘London Bridge’ – well we couldn’t not visit could we?!

This rock structure was formed in very much the same way as the 12 Apostles, however was named London Bridge, on account of its original resemblance to its namesake. Unfortunately, the arch closest to the shoreline collapsed unexpectedly on 15 January 1990, leaving two tourists stranded on the outer part until they were rescued by a helicopter. Until this time the bridge was joined to thye mainland and it was possible to walk out across both arches to the end of a ‘bridge’. Nowadays you have to use your imagination a little, however it’s still a really interesting place to visit! 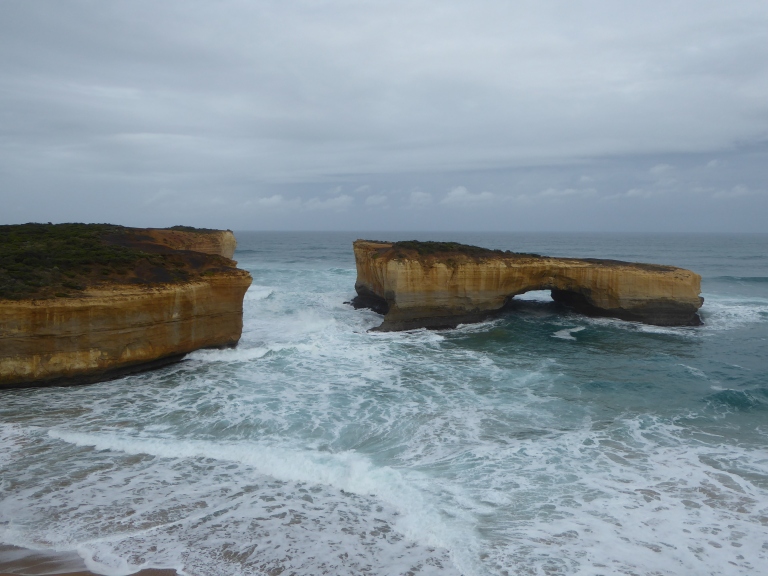 Having spent the most wonderful couple of days on this stunning strip of road, it was time to head inland and say goodbye to the set of wheels which had become home. Next stop – Melbourne!