After an amazing night sleep I woke up at the crack of dawn and made my way down towards the Reef Fleet Terminal for 7am. On the walk down, at a set of traffic lights, I bumped into Vanessa, a German girl from yesterday’s Cape Tribulation tour and a Danish girl called Ea who Vanessa had met in her hostel. It turned out that we were all on the same boat for the rest of the day which was really lovely! We grabbed a quick coffee and made our way down to the dock for check in. After signing our life away on the waiver forms we walked down to our boat, the Ocean Freedom, and made our way on deck. 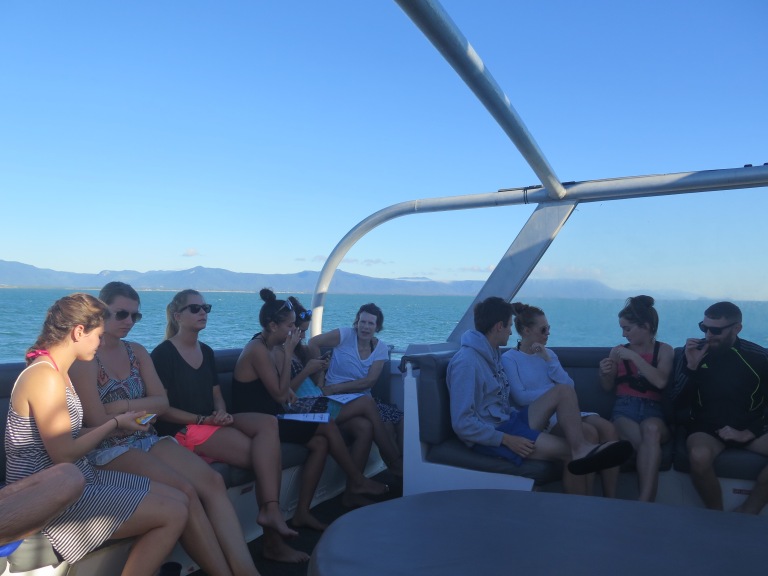 Once on deck we were given a little intro chat by the crew before being treated to coffee and Danish pastries. There was a real mix of people on board from backpackers to families which gave the day a nice dynamic. We made friends with quite a few people on board which made it really fun. I even met a Scottish girl called Mhairi who said I was the first person she’d met in 8 months who had pronounced her name correctly! I feel her pain… 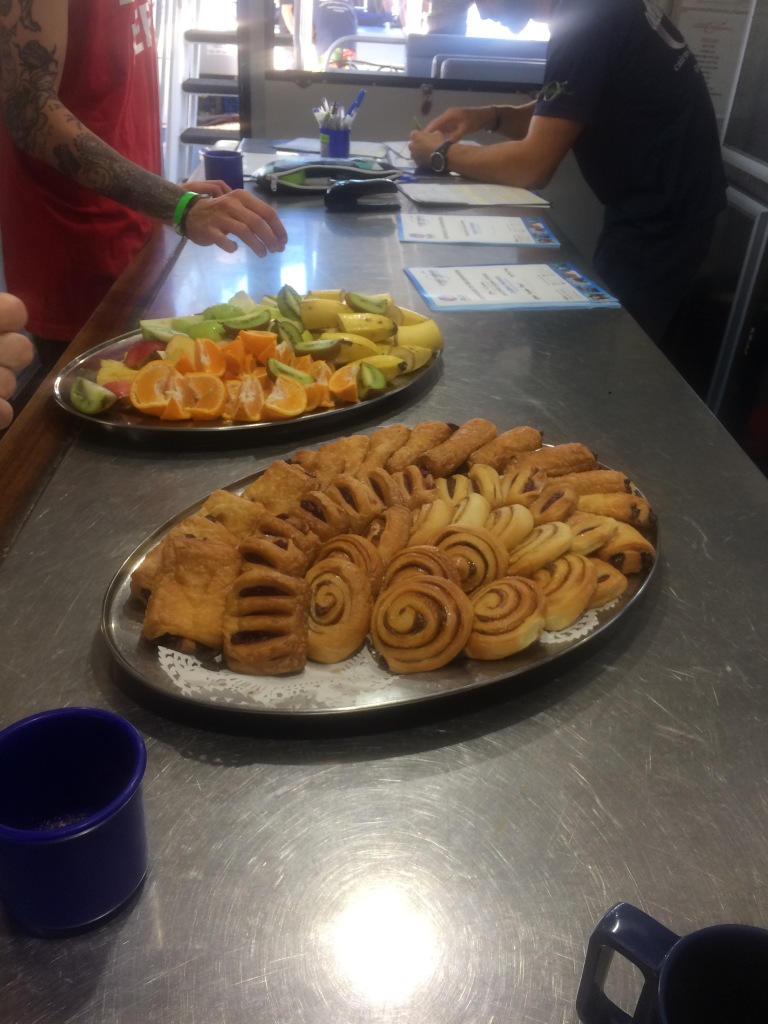 After breakfast we sailed for roughly an hour before reaching our first spot of the day at the reef of Upolu Cay. We first all loaded onto the ship’s glass bottom boat which gave us a great introduction to some of the wildlife on the reef.

Back on the Ocean Freedom, anyone diving was given a briefing by Mark, one of the dive instructors, where he taught us the breathing mechanisms of the dive gear, hand signals from ‘I’m ok’ to ‘shark!’ and also a detailed rundown of the types of wildlife that we could expect to see in the depths. Soon we were split off in our group and fully kitted up in our wetsuits, flippers, air tanks, weights and mouth pieces – we were off! 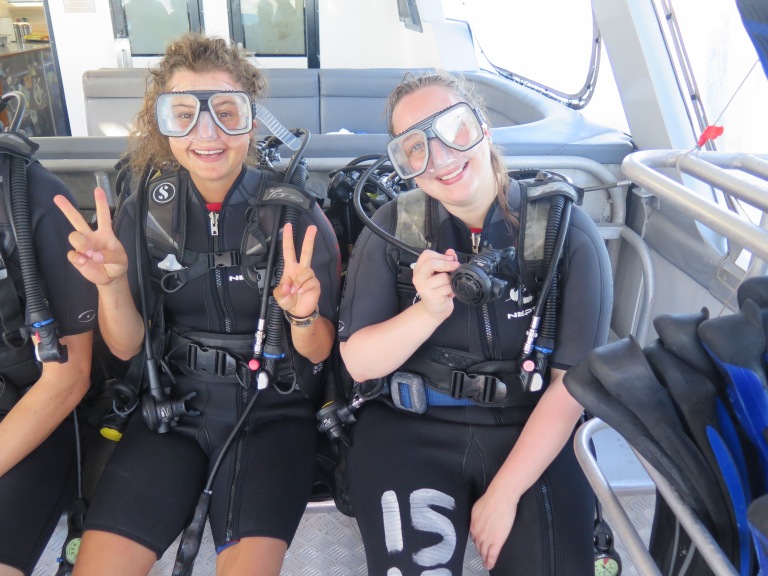 Quite a few people on board the boat were really nervous about the dive and this is something that the crew took really seriously – I was really surprised; it hadn’t even crossed my mind to be nervous. That was until I got in the water… Before you head off you have to dive to the bottom of the boat and hold onto a couple of metal bars. You do this for roughly five minutes whilst the instructors ensure you regulate your breathing and get used to breathing with the tank – I found this way scarier than I expected and it took me quite a while to slow my breathing down to a regular pace.

Soon enough I was fine and Mark took Ea and I down to the depths. I can’t describe how beautiful the reef was! We saw such amazing wildlife. Everything we learnt of the hand signals went completely out of my mind – I had no idea what Mark was gesturing to us the whole time. Lucky for me the signal for shark was never used as I would have recognised that one a mile off! 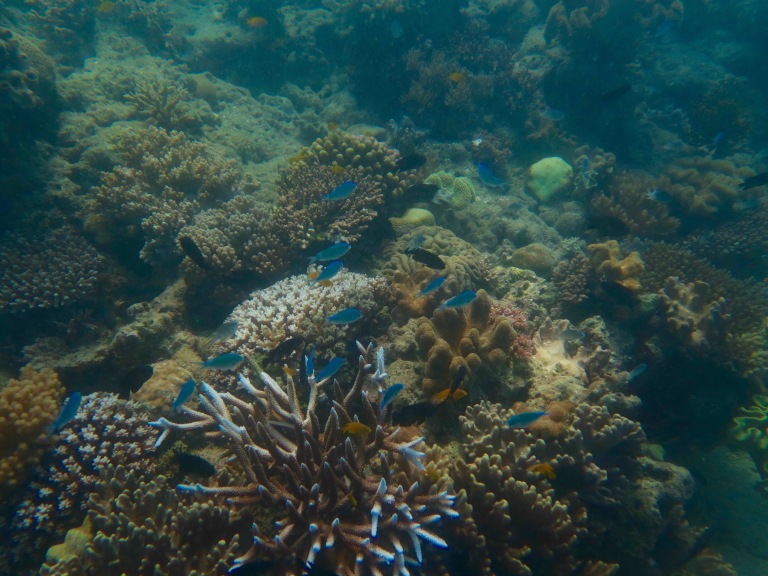 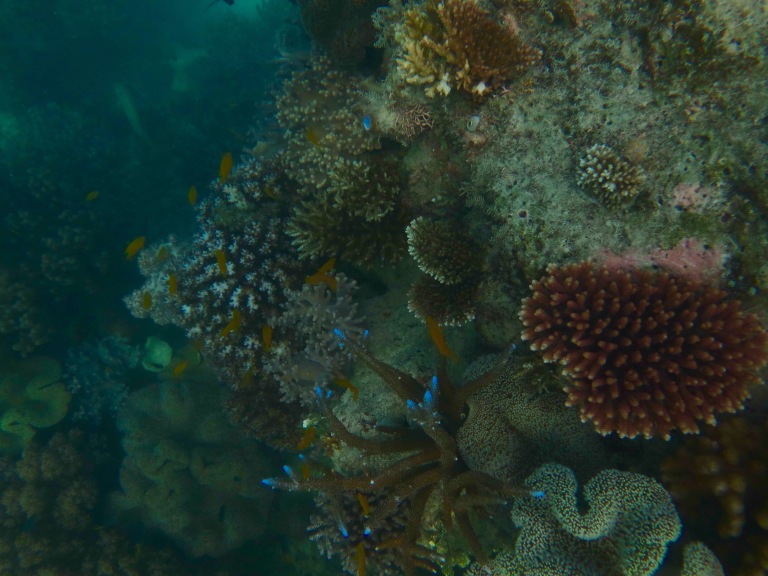 The dive for was around 25 minutes but before I knew it we were back at the surface. Ea and I quickly pulled off our diving gear, grabbed our snorkels and got back in the water – we were not done with the reef yet! 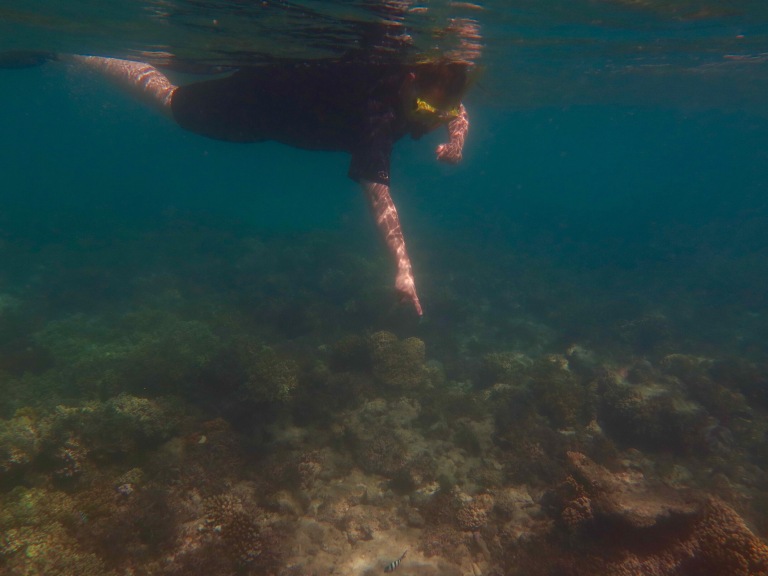 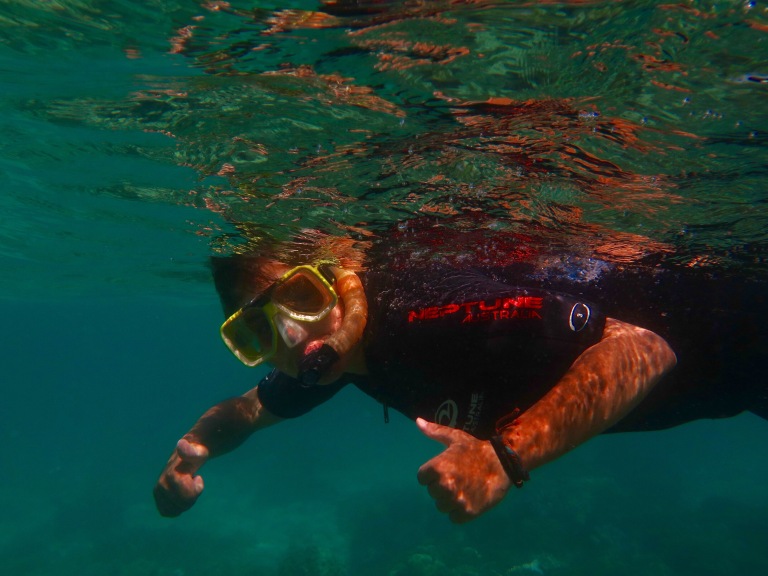 Our main aim for the snorkel was to try and find one of the green turtles which frequent the area. After maybe half an hour in the water, and lots of beautiful fish and coral, we were still searching and almost ready to give up!

Before I knew it I heard a massive scream from Ea (I instantly thought shark) and sure enough right next to her was the largest turtle I have ever seen – it was huge!! The turtle was completely unfazed by us, curious if anything, and was happy for us to follow him for around 15 minutes – it was completely surreal!

After taking a million photos of the turtle we swam back to the boat and enjoyed a delicious lunch, a sunbathe and a chat with some of the other people on the boat. 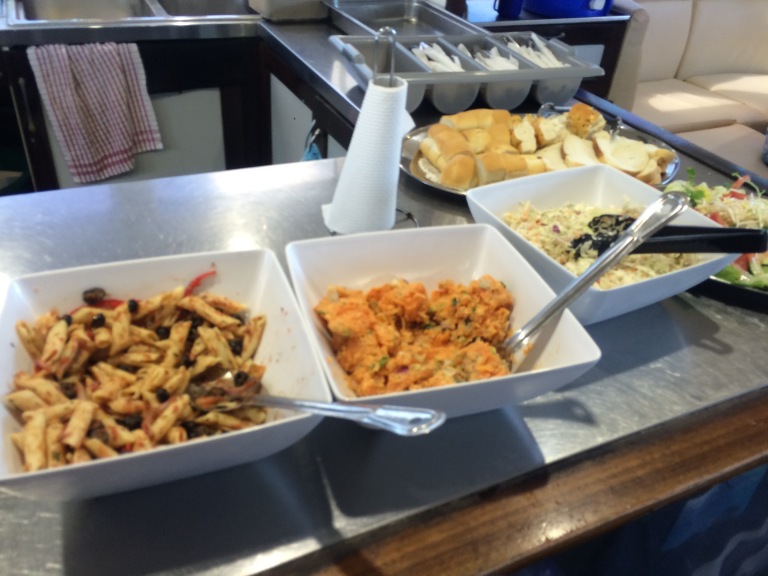 After lunch we sailed for roughly another 15 minutes before anchoring up at our next dive location; the Wonder Wall at the outer edge of the Upolu Reef. This area of the reef is a sand island in the middle of the ocean which you literally step out of the boat into – it feels so weird to be walking on ‘dry land’ and be completely surrounded by water!

After walking to the edge of the wall we donned our snorkels, masks and flippers and hit the waters again for some more exploring. We were really lucky here and saw some fascinating creatures including Australian clown fish, nemos, stingrays and reef sharks it was amazing! 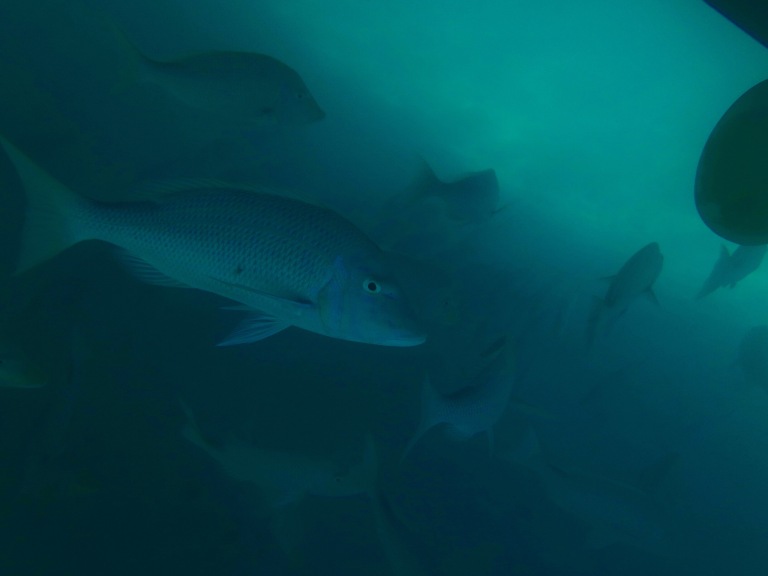 After an hour or so in the water we made hopped back on the boat, and sailed back to Cairns filling ourself up on as much cheese and biscuits and cake as possible! 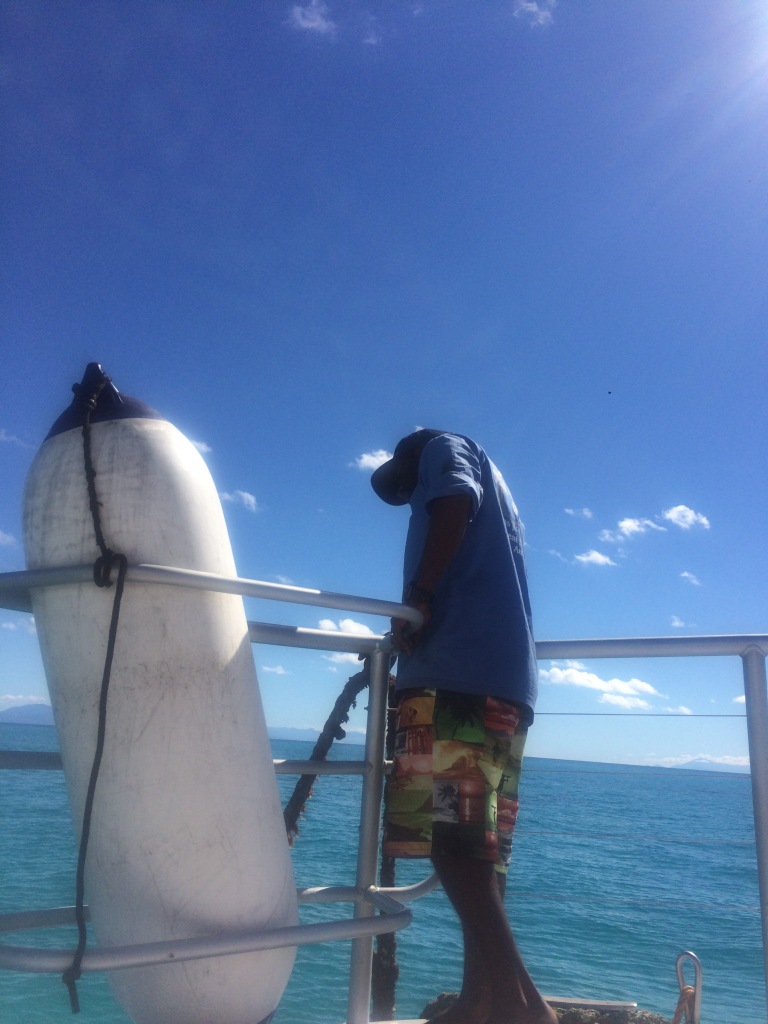 When we arrived back on dry land Vanessa, Ea and I headed towards the cities lagoon and enjoyed the last of the days sun sat out on the grass with ice creams.

That evening, after checking out of my hostel I was officially homeless until 1am when I would be boarding the 10 hour night bus to Airlie beach. Luckily Vanessa and Ea were up for a fun night out so after a quick nap we all met back up at PJ O’Brian’s where we had dinner and danced until the wee small hours. We bumped into a few other girls from the boat which made it a really fun evening. At around half 12 I grabbed my bags from the hostel and made my way towards the greyhound bus terminal. Next stop Airlie Beach!