After a 12 hour flight I arrived in Hong Kong in a bit of a daze – the time difference had completely thrown me off. I wandered through the sprawling terminal buildings before realising that all I wanted was a coffee and a sit down – I was so scared about falling asleep and missing my connecting flight!!

17 hours later I arrived in Auckland still a bit bemused at the feeling that I was on the other side of the world completely on my own. I got the sky bus into the CBD before lugging my rucksack up the very steep Charlotte Street up towards my hotel, the Auckland City Hotel – I was exhausted!! My one hour power nap turned into a three hour snooze (oops) but I soon headed out, admired the Sky Tower at night, grabbed some pizza and had an early night before the big day tomorrow!

The next morning at 5am I woke up (part jet lagged I think..) and began getting myself ready for boarding the Kiwi Experience bus down on Queen Street at 7am. I met a British couple outside Base backpackers who told me about the amazing trip they’ve been on whilst we waited for the bus – it was weird meeting people whose trips were coming to an end whilst mine was just beginning. We all boarded the bus, met our driver, Fly, and started driving up north – the scenery was so beautiful and, although cloudy at the start, the sky soon cleared up and the sun came out.

At out first stop of the day  we made a pit stop at a cute little bakery for coffee and pastries before hitting the road again. By this point I’d got chatting to quite a few people on the bus so was feeling more confident that I wasn’t going to travel the whole country as Billy-no-mates…! It was so interesting hearing about what stages different people where at on their travels and getting tips about my trip to come. Our next stop of the day was at Whangarei an old shipping town which had an interesting waterfall to stop off an admire – I imagine this will be the first of many on this trip!

After a quick wander it was back on the bus and we made our way to our final stop of the day, Paihia on the Bay of Islands where we would be staying for the next couple of days.

We were dropped off at our hostel for the night – Pipi patch, the rooms were allocated at random and when I made my way to my dorm I realised I was in a room with just guys – great. I chose my top bunk and dumped my stuff before go meeting some of the girls that I’d got friendly with on the bus. 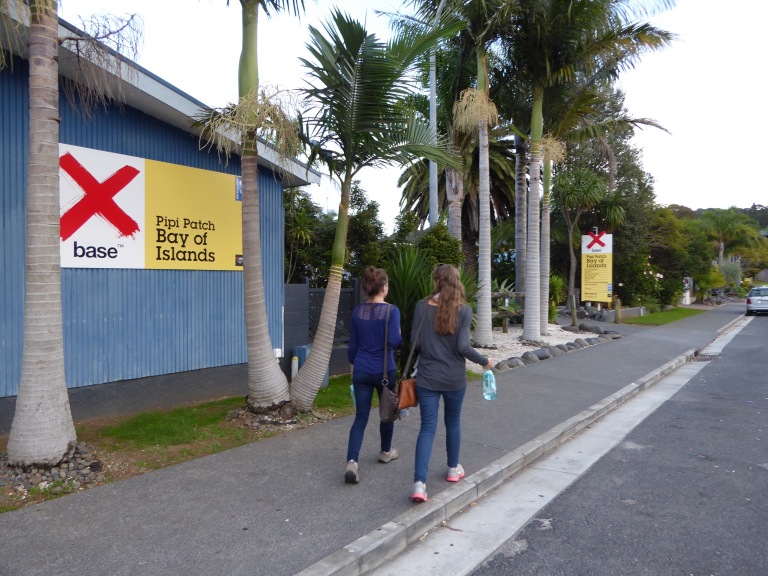 We decided to take a little wander through the town which boasts one small Main Street crammed full of souvenir stalls, ice cream parlours and surf shops. It was a really cute town with a real beachy feel to it.

We popped into Els cafe and grabbed lunch of delicious quesadillas which we ate out on the beach all chatting and getting to know each other. 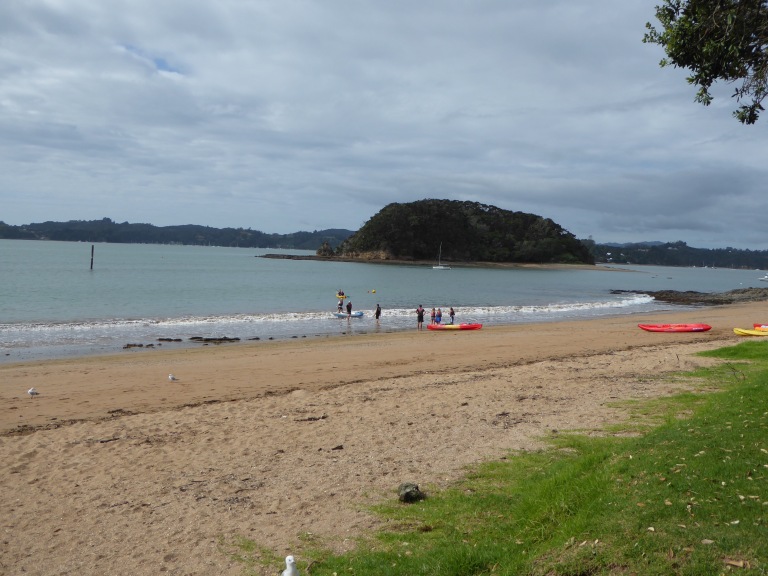 Full and satisfied, we decided to walk off our lunch and take a stroll down one of the town’s many walking routes. We popped up towards one of the viewing points which gave us a lovely view out over the bay before heading down to the waters edge and heading towards the Waitangi Treaty Grounds. This site is of real importance to the Maori people and is the spot where the local tribes men signed the treaty with British back in 1814. Being backpackers on a budget we decided against the $25 entrance fee and instead just admired the location from the outside… 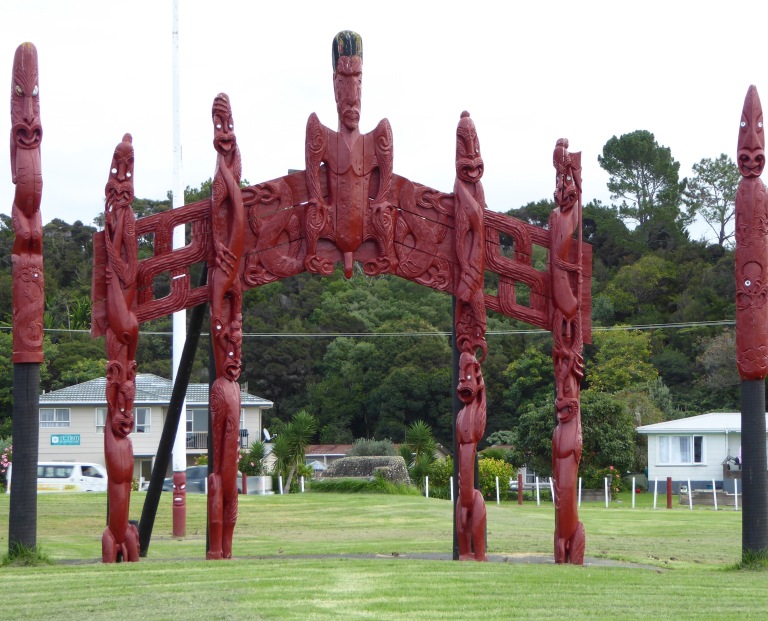 The walk actually took us quite a while so when we arrived back at hostel we wanted nothing more than to sit outside in the warm and wait for the bar to open (obvs). We all had a BBQ together which was lovely. It was ladies night in the hostel that night (much to the disappointment of some of the guys in our group) so we thoroughly took advantage of the $5 glasses of wine before crawling back to our room and enjoying our first of many night on squeaky bunk beds!

The next morning we were being picked up by the bus at 7am to make our way up to New Zealand’s most northern point – Cape Reinga. I think I still must be a bit jet lagged as I was pretty much wide awake at 5am – must be the first time in my life that an early start has been a breeze! This bus wasn’t actually the kiwi experience but a local tour provider so the bus was full with people of all different ages and nationalities which made it all the more interesting. Cape Reinga is over 300km from Paihia so there was lots of different stop offs during the journey with lots of intersting things to see. The northern region of New Zelaand is of rich cultural heritage and is sacred to the Maori people still today. Our bus driver Chris was himself a native Maori and therefore was able to tell us all the amazing facts about the places as we drove through; I think I had my nose to the window glass most of the time…
Our first stop off of the day was at the Manginangina Scenic reserve where we wandered through the forest and admired the ancient kauri trees; some of which are believed to be over 1000 years old. Apparently the queen visited the forest recently and therefore a new wooden walking platform has been constructed through the forest – lucky for me as I was stupidly wearing flip flops!

Back on the bus we stopped off briefly at the town of Mangonui which really reminded me Kames, where our holiday house in Scotland is. Some of the buildings right on the sea here date back to the 1800s and look like something straight out of a country and western film (wrong continent I know!)

Today was spent mostly hopping on and hopping off the bus at different locations and ultimately felt like a school trip, but our next stop of the day was at the town of Taipa where we all grabbed coffees and admired the beautiful beach.
Back on the bus for a little while we stopped at Kaitaia for lunch at The Hub Cafe. Part of our bus ticket for the day included lunch here; the options were either Fish and Chips or Falafel. Not being a fish fan I went for the falafel and was completely robbed – safe to say I was pretty hungry the rest of the day! 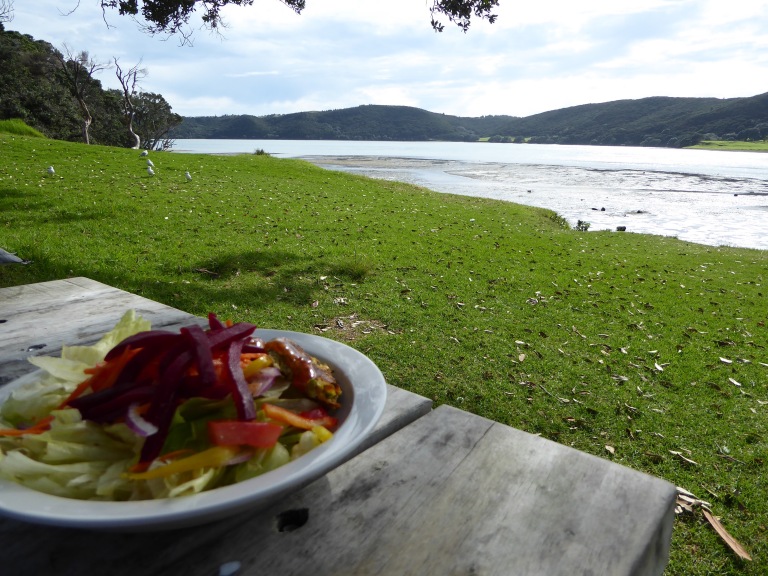 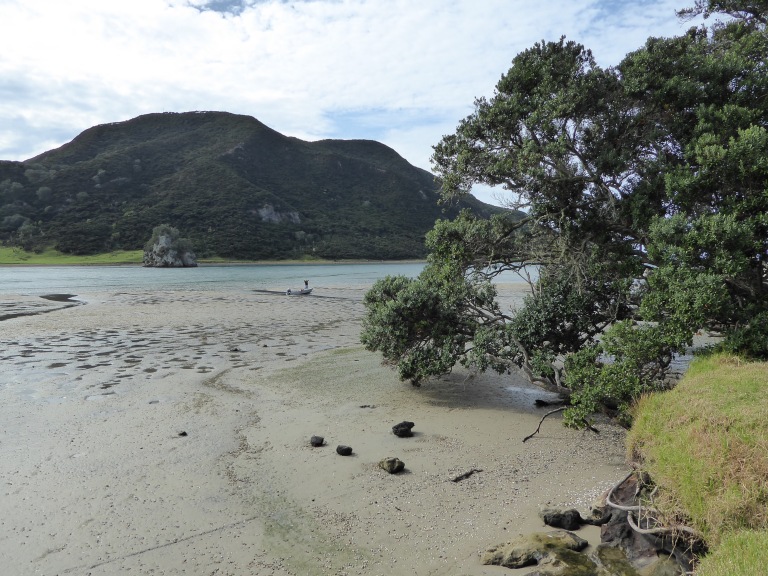 Having eaten (a morsel) we hopped back on the bus and headed towards our main stop of the day – the lighthouse at Cape Reinga. This lighthouse is the most northerly point of New Zealand and marks the place where the Tasman Sea and the Pacific Ocean meet.

I really didn’t expect that you would be able to see the exact point where the oceans merge – but you really can! The waves crash against each other coming in from opposite directions and it creates white whirlpools which are easily visible from the cliffs above. Ancient Maori legend tells that the Tasman Sea is male, whilst the Pacific Ocean is female – the waves crashing together where the waters meet and the ripples that are created are apparently these spiritual males and females ‘dancing’. It really was a beautiful viewpoint and a great little wander. 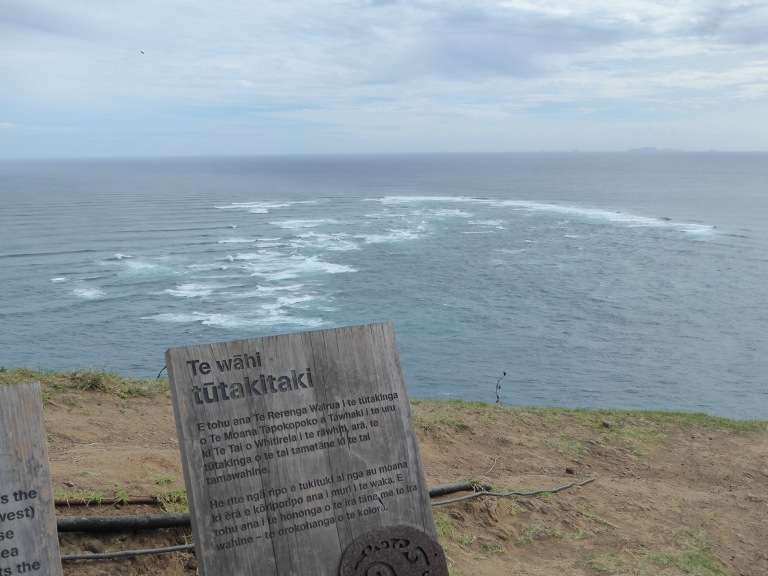 Having spent some time at the lighthouse we walked back up to the bus where we were swiftly taken to our next stop of for the day; the Giant Te Paki Sand Dunes. We all grabbed our sand boards walked to the top (or, erm, ok, crawled) before getting on our fronts and speeding down the dunes – it was so much fun. We spent about 45 minutes here which was great – particularly as the sun properly came out (I’m still adamant I got a tan).

Having dusted the sand off our feet we hopped back on board the bus and headed towards 90 mile beach which was absolutely stunning. The beach is actually a public highway so the bus continued driving down the sand for nearly an hour which was a bit bizarre! We did hop out and dip our toes in the Tasman sea – all I kept thinking was ‘are there sharks here?!’

We hopped back on board the bus and headed back to Paihia for the evening (stopping at a random little furniture workshop on the way for coffee and quiche).
When we arrived back in Paihia me and some of the girls I’ve made friends with popped to the supermarket to buy stuff to make dinner back at the hostel. We just made pasta which was a bit of an experience – the hostel kitchen was so busy and a bit manic. We ate outside which was lovely until a praying mantis landed on my pasta. The girls all claim it was a grasshopper but I’m not so sure – I’m still a little traumatised I think. That evening we all just chilled in the girls room before I headed back to the my room for a night in the lads dorm (!)

The next morning we woke up around about 9ish and started packing up for checking out of the hostel. My padlock on my bag had somehow reset itself so I had to get maintenance to come and cut the lock – travelling is going well three days in!

Having checked out a few of us wandered up towards the ferry port and boarded a bus across Russell, one of the many islands in the bay. We wandered up the cute sea front strip and became instantly jealous of all the amazing houses. We popped into the Wharf Restaurant and grabbed coffee and the most amazing lemon meringue pie which I split with Hannah, a Swedish girl I met in the hostel – it was delicious! 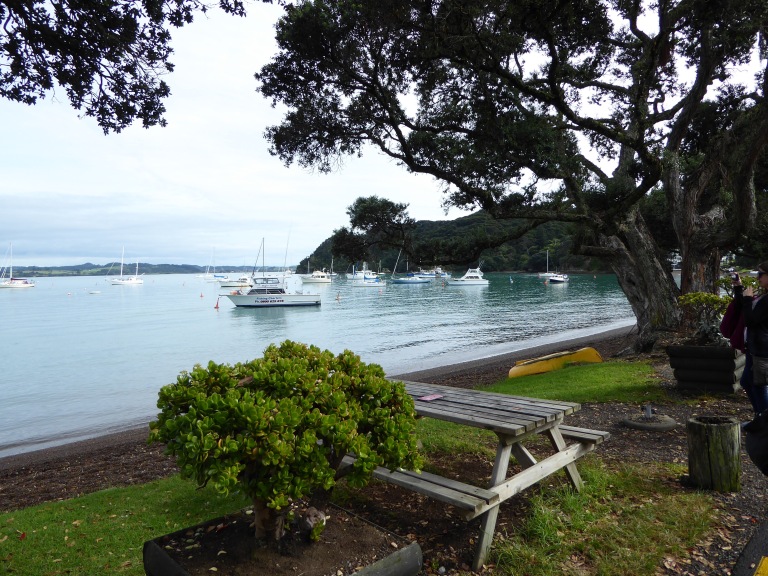 The island of Russell houses New Zealand’s oldest pub so we decided it would be rude not to go and have a drink there. It wasn’t until we were sitting on the pub’s terrace with our pints of cider that we realised we were in the wrong pub! The sign that said ‘Duke of Marlborough since 1976’ certainly gave it away – oops! 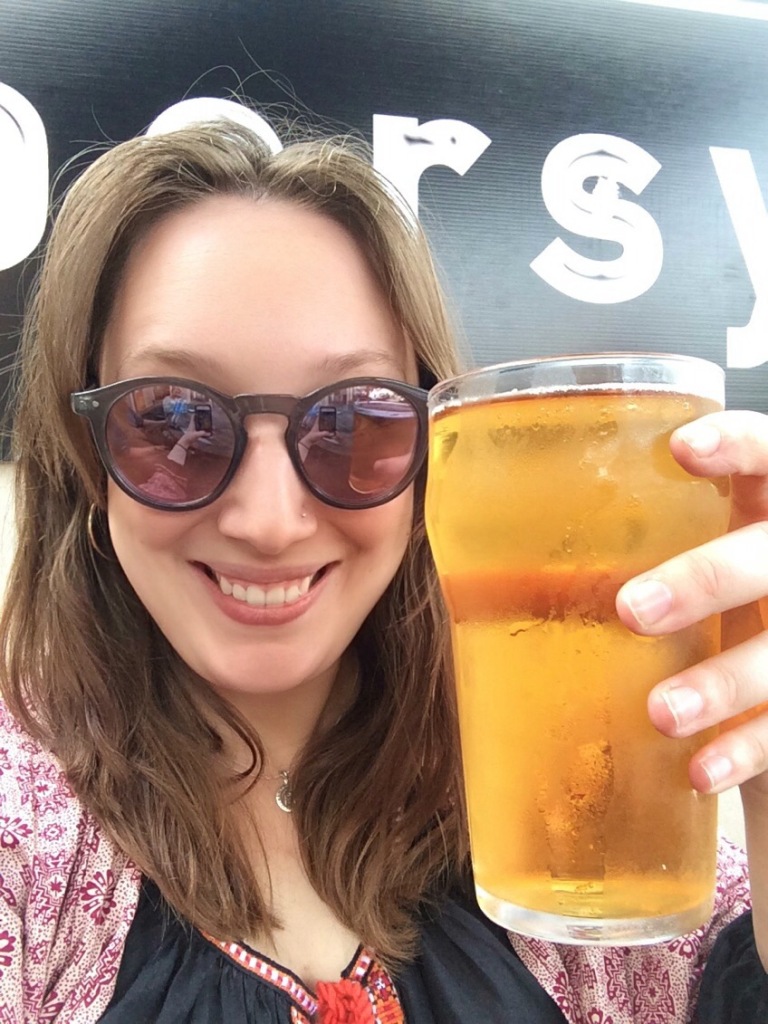 We finished our drinks, headed down to the actual historic pub before getting back on the ferry and heading back to the mainland.

We had an hour or so back at the Hostel before the Kiwi Bus picked us up. I’ve already been locked out my debit card so I spent that time on the phone to bank. As I said, three days back in and things are going really well…! Ha.
That afternoon we headed back to Auckland and checked into our hostel, Nomads, right in the city centre. The girls and I checked into a room of 6 – no more guys room for me! Our plan was to grab some drinks at the hostel before heading out into town after making dinner which we ate out on the roof terrace. After a few bottles of wine on our dorm floor however we decided to stay put and crawled into bed around 2am feeling very merry!

Tomorrow we board the bus heading southbound down the North Island; next stop Cathedral Cove and Hot Water Beach