After dropping our beloved Mustang off at the airport we boarded a bus and made our way into downtown San Diego.

We didn’t have any accommodation organised and thought it would be easy enough to find a bed for the night if we headed to the Gaslamp district. The Gaslamp district is one of the historical San Diego neighbourhoods, and after a period of urban renewal in the 1980s went from a previously dingy area to a bustling downtown district full of bars, restaurants and plenty of nightlife.

We wandered around the area for a good hour and a half receiving constant rejections from string of hotels and hostels. It turns out there was a big convention in the city whilst we were there and it appeared half of the city had been reserved!

Not deterred, we carried on trying and eventually found a private room in the HI downtown. It’s got to be said, this was probably our worst accommodation of the trip. The hostel was pretty decent but our room was small, noisy and had a strange smell. Ultimately it was fine and reasonably priced, but nothing like the places we had been staying in throughout California.

Perhaps Miles and I should have done better research into San Diego but we felt a little lost as to what to do first in the city. Unlike other places in the US which we had visited, there was no main landmark or site that we were aware of. In the end we just decided to wander and take in the city.

As San Diego is a Navy town we decided our best bet was to head towards water. We had a wander around Seaport Village down by Harbour drive – it’s a collection of shops and restaurants but felt a bit touristy so we didn’t hang around. After this we wandered up Harbour drive taking a stop at the famous ‘unconditional surrender’ statue which is based on a photograph of a sailor kissing a nurse in Time Square. 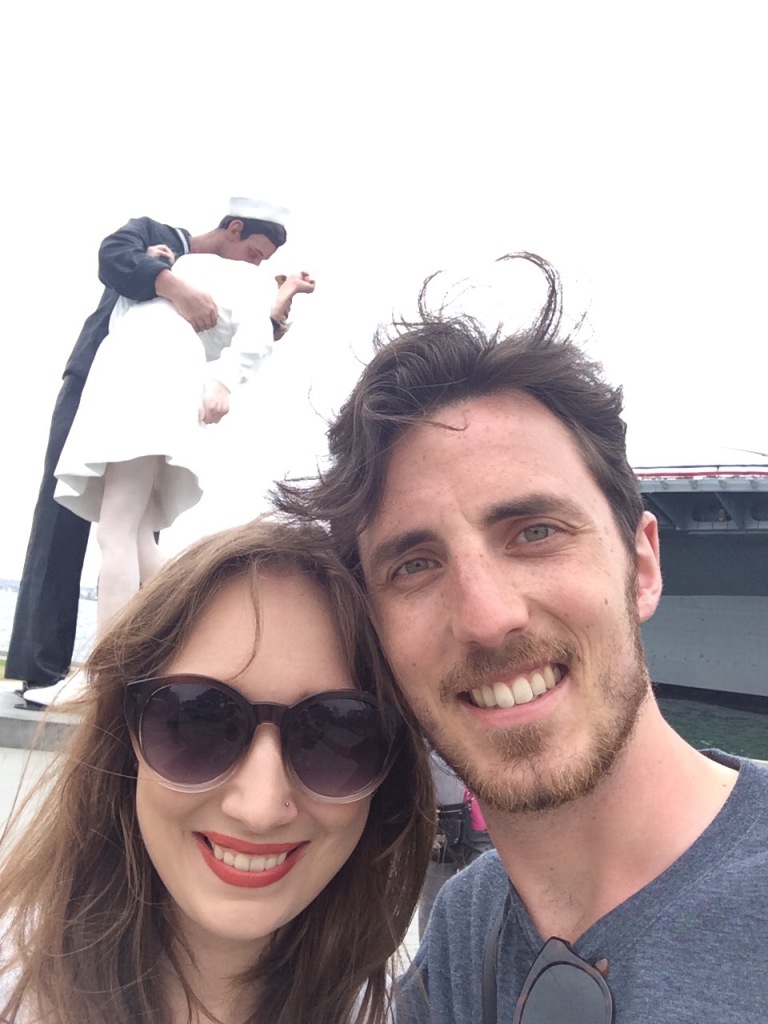 After this we continued walking up the waterside up to the US Midway Museum but decided that we weren’t interested enough to pay to visit! Cheap skates!

Soon hunger got the better of us and we decided to pop into Anthony’s Fish grotto on seeing the fantastic words ‘super happy hour’. Anthony’s fish grotto was perhaps one the strangest places we have ever visited. The only way I can describe it is like stepping back into the past through an American Butlins/holiday park kitsch dream. The restaurant was VERY outdated and had a certain diner style about it which I’m not sure was intentional. Not only this we were the youngest people in there by about 50 years however with $5 beer and wine and cheap as chips fish tacos (for Miles obviously not me) you cannot grumble. We ended up staying there for maybe three hours drinking lots of wine and eating lots of small plates. The people in this restaurant were the overriding memory, from the couple in their matching hawaian shirts to the cutest possible old man sitting behind Miles – it was people watching heaven. Oh and who can forget our waitress who asked for us to pay before we’d finished because it was the end of her shift and she ‘wanted her tip’ – oh right.

A little while later, and feeling a little tipsy, we bid fairwell to Anthonys and continued to wander through the city centre. As I mentioned we were a little unsure as to what to visit next, but we decided to head over to Pecto Park stadium and see if we could buy tickets to the baseball match that night between the San Diego Padres and the San Francisco Giants. After queuing for a little while we bought our tickets and made our way inside the stadium. I’ve got to admit I didn’t understand a thing that was going on (Miles ended up perched next to a local learning the rules) but we both enjoyed the contant stream of drinks/watching the kiss cam and making friends with the people sitting next to us. The rest of the night seems like a bit of a blur after that point, but apparently we made our way back to the Hostel….. 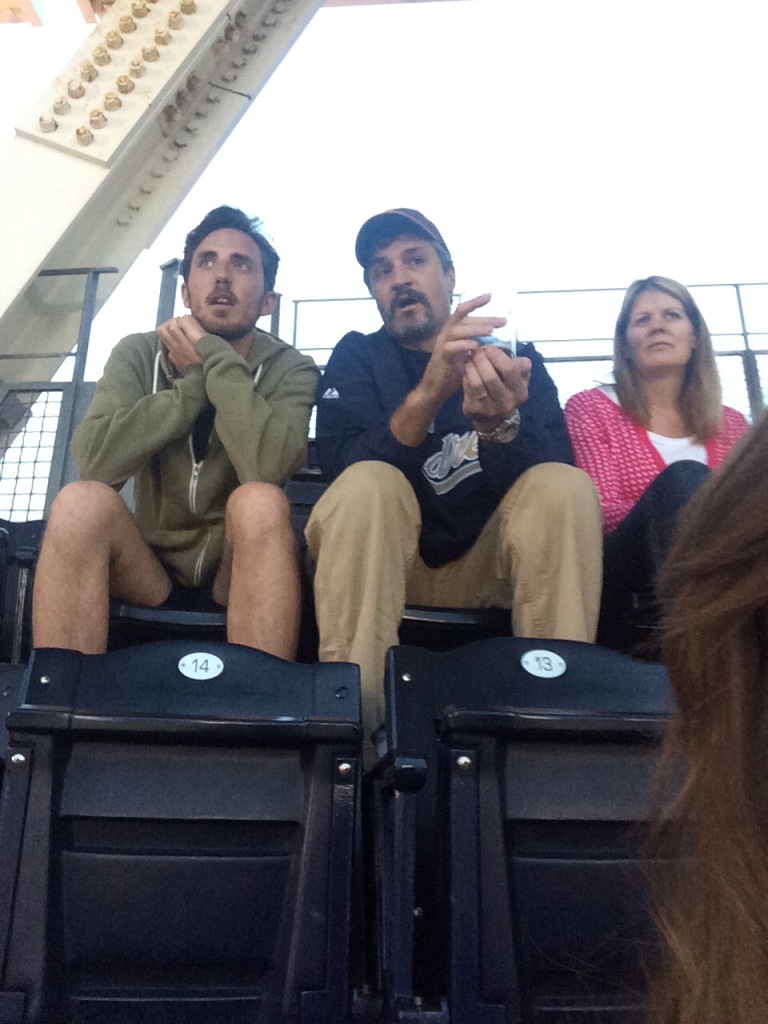 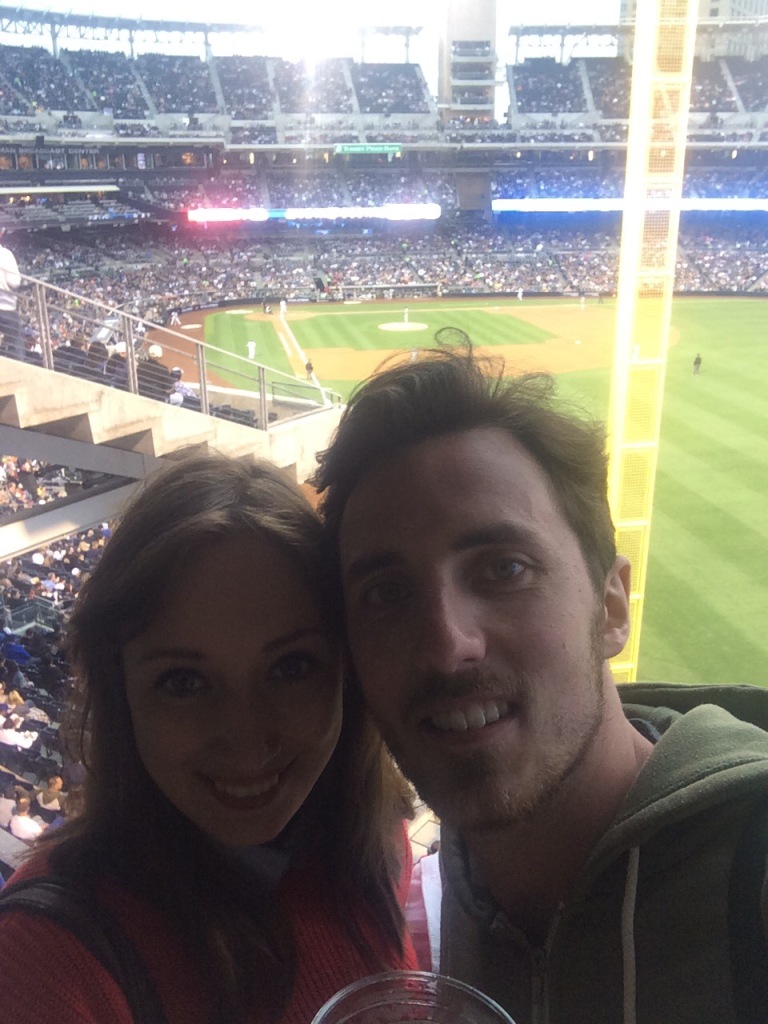 So the next morning in San Diego was not our finest moment. We both woke up feeling seriously horrendous from the night before. Our hostel provided free breakfast so we made our way down to the kitchen and struggled to even look at the food, let alone put any on our plates. We eventually built up the courage to put some dry bread and fruit on our plates. I’m not sure we ate anything and most of breakfast was spent lying on the tables feeling very sorry for ourselves. The hostel couldn’t accommodate us for the next night so we had to pack up our stuff and vacate the room. The hostel kindly agreed to hold our bags for us and as we loaded these into the storeroom Miles had a very unfortunate encounter with the lobby bin. I won’t go into too much detail….

After dropping off our bags we picked ourselves up and set out for another day exploring – we weren’t going to let the hangover from hell ruin our last day in California. Having spent the day at the water front yesterday we decided to visit San Diego’s famous Balboa Park. Balboa Park is a 1,200 acre open space with many attractions including a zoo, theatres and museums. With a bigger expanse than New York’s Central Park you would spend a whole day inside it’s confines. 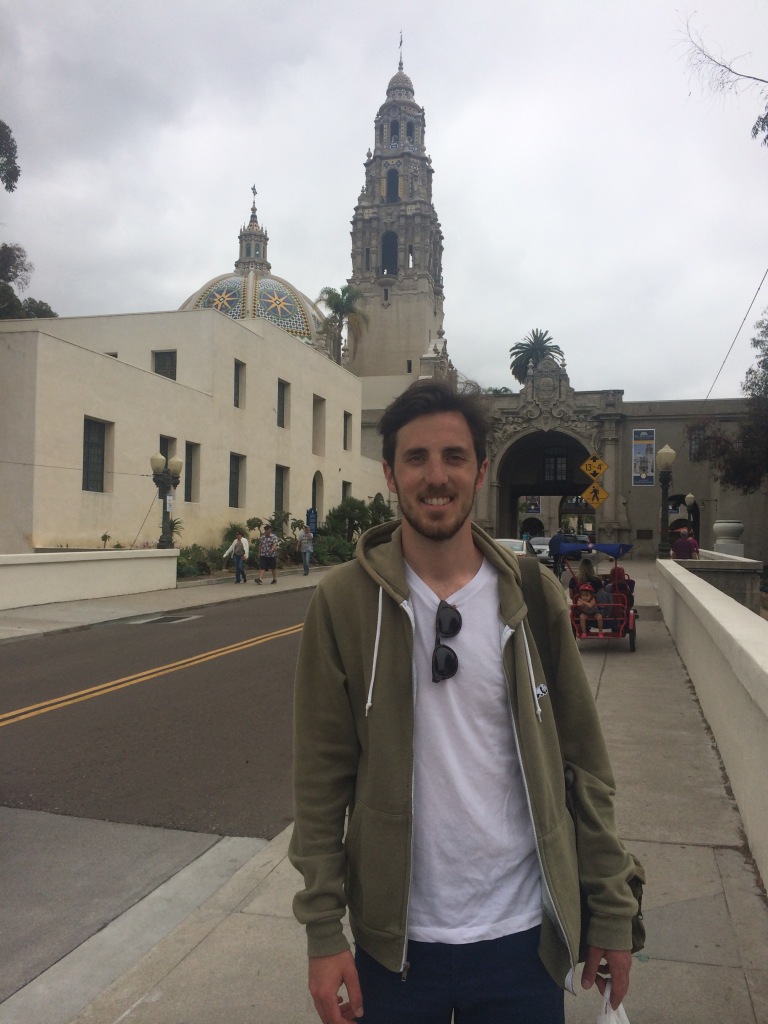 Feeling the way we were feeling however, this was not an option. After grabbing a bite to eat and a coffee we found a nice shaded area of grass and sat down to watch the passers-by in the park. Three different wedding parties walked past us which as you can imagine I loved! We soon realised we were sitting next to the bus stop for the Old Town Trolly – a tram service which takes you around the city via all the sites and then down to Old Town San Diego. After a little while discussing it we decided that we were in no fit state to direct ourselves so sitting aboard a trolly which takes us to see everything was exactly what we needed. This sort of thing is very unlike us – but needs must! On board we climbed! 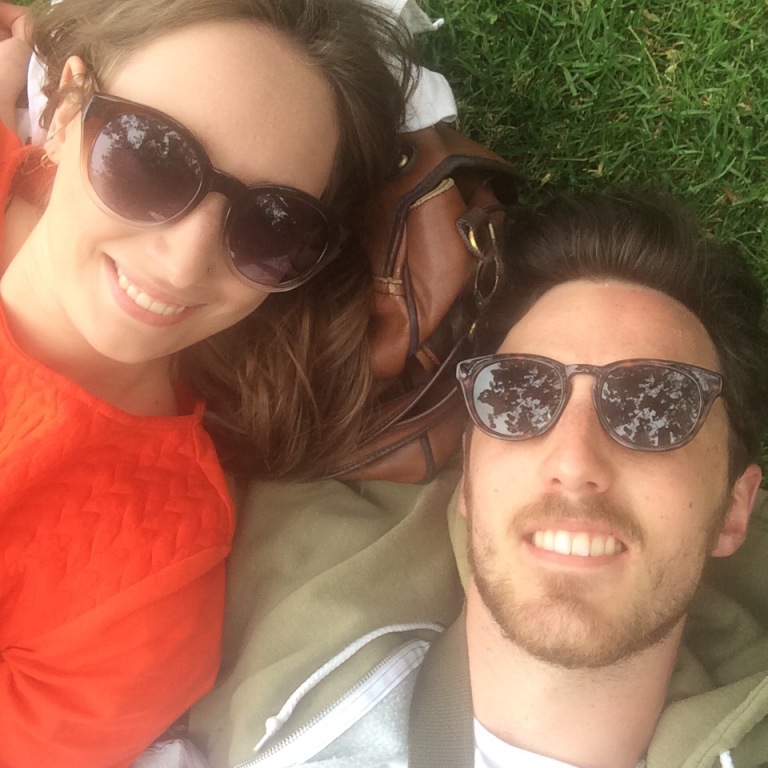 The Old Town trolly to us through Balboa Park, through the city’s various neighbourhoods and across to Old Town San Diego. There was a commentary throughout which I have to admit was actually pretty interesting – particularly as we really didn’t know much about San Diego. Old Town San Diego, the main stop of the tour, is considered the “birthplace” of California. San Diego is the site of the first permanent Spanish settlement in California. Because of this the Old Town has a real Mexican feel about it. Although extremely touristy, and almost Disney-like’ it was interesting enough to wander around the old settlement buildings including the print shop, the old court room, the bank etc and read about the town’s history.

After feeling suitably cultured we sat down and had a Mexican lunch which well and truly cured us.

After filling our boots with tacos we hopped back a’board the trolly and headed to the final stop on the route – Coronado. Coronado is a small island just of the bay of San Diego and is connected to the mainland by the Coronado Bay Bridge – it’s quite an experience driving across it! We actually didn’t get off the trolly on the island but it was interesting to see the beautiful white beaches and view Mexico across in the distance.

When we arrived back on the mainland we hopped off the bus in the Little Italy district of the city in the hope that the market we had seen earlier would still be open. Unfortunately it wasn’t but it was still nice to wander around the neighbourhood and pop in and out of the little shops. As evening drew in we decided it was time to look for a dinner spot. With us both being Italian food fans we chose to stay in the area and look for a nice restaurant to spend our last meal in California. This is where pizza gate begins…

We had grabbed a smoothie from one of the shops on the main street, India Street, when we noticed an insane queue forming outside one of the restaurants across the way. After enquiring as to what the queue was for, we were informed that this place was THE place to get pizza in San Francisco. After a recommendation like that we were sold and began to join to join the queue for Filippi’s Pizza Grotto. This was our first error.

We queued for over an hour and once we were shown to our table we were starving. With images of thin crust authentic Italian pizza’s in our mind, we both made our selection and ordered from the waitress. She looked surprised when we ordered a pizza each and went on to tell us that most people share. ‘No no’ we said ‘we’re really hungry’. Error no. 2. The waitress looked at us funny but none the less took our order. A little while later the pizzas were delivered to our table and it’s no exaggeration to say that we were embarrassed about the site of the food on our table. The pizza’s were huge, thick based, and covered in more cheese than you can imagine. Miles and I probably had one slice each before admitting complete defeat. We were so disappointed with the pizzas – they weren’t even particularly tasty and were so at odds with what we had expected. The waitress obviously took pity on us and gave us a small discount on our bill – in return we gave her one of our leftover pizza’s which she took home for her daughter. The second pizza we took back with us just in case we got the nibbles later on.

We had a really early morning flight the next day to Austin so after heading back to the hostel to grab our bags, we headed to the airport where we spent the night sleeping on the chairs -simply to save the cost of accommodation that night. Most definitely not the best night sleep we’ve ever had but worth it for the saving. Also I would be lying if I said we didn’t crack into the leftover pizza to see whether it tasted any better. It didn’t.