Scandinavia has been on Miles and my travel ‘to do’ list for a while now and we finally took the plunge and booked flights Denmark’s capital of Copenhagen.

We’d heard horror stories about how expensive Scandinavia was, so decided to book an apartment through Airbnb to save some money on accommodation and give us a little more flexibility in terms of cooking etc.

We completely lucked out on this rental; it was way more than we could have ever expected. A beautifully designed, open and airy apartment right in the trendy area of Christianshavn!

Once we’d arrived in the city, we dumped our bags (after bumping into the owner of our flat and his pet tortoise in the apartment building corridor) and decided to make our way to the canal to embark on a boat tour. I always think these tours are one of the best things to do when you arrive in a new city; it lets you get your bearings and work out where you want to visit going forward.

We saw lots of the cool spots of Copenhagen including Nyhavn, the old Stock Exchange, the Little Mermaid statue and of course we floated past the world’s number one restaurant; Noma. Unfortunately a meal here was a little out of our trip budget…! 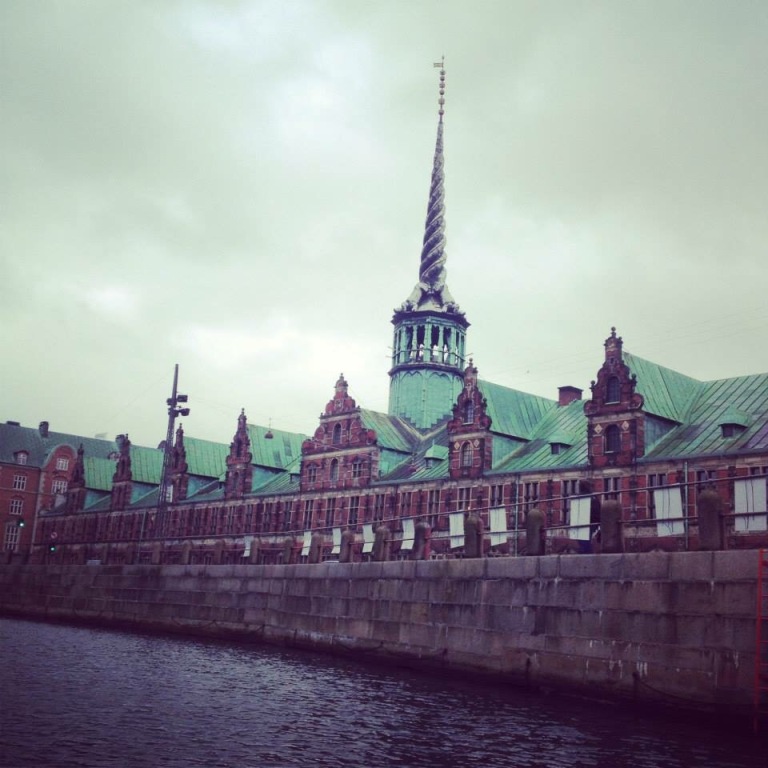 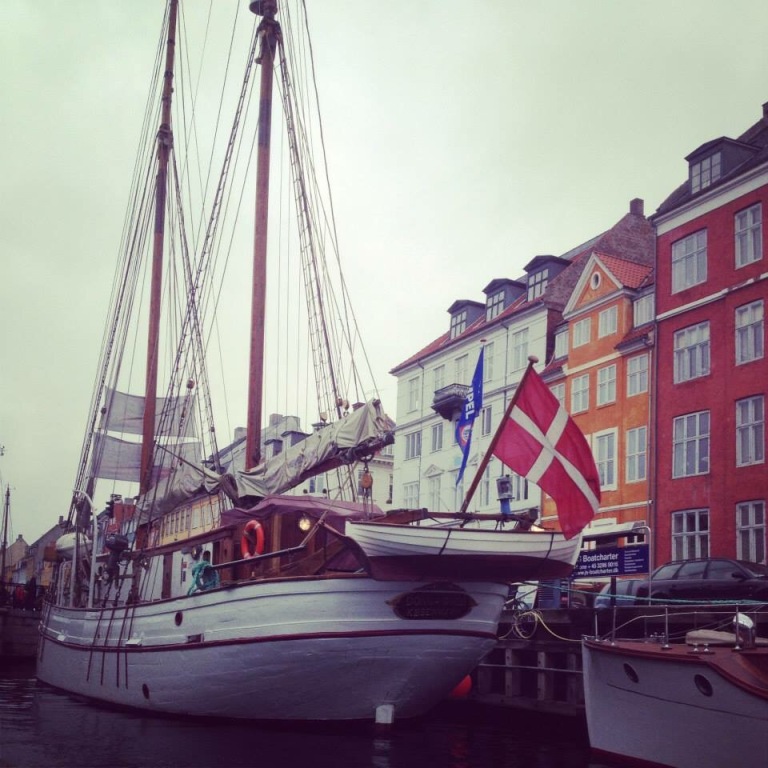 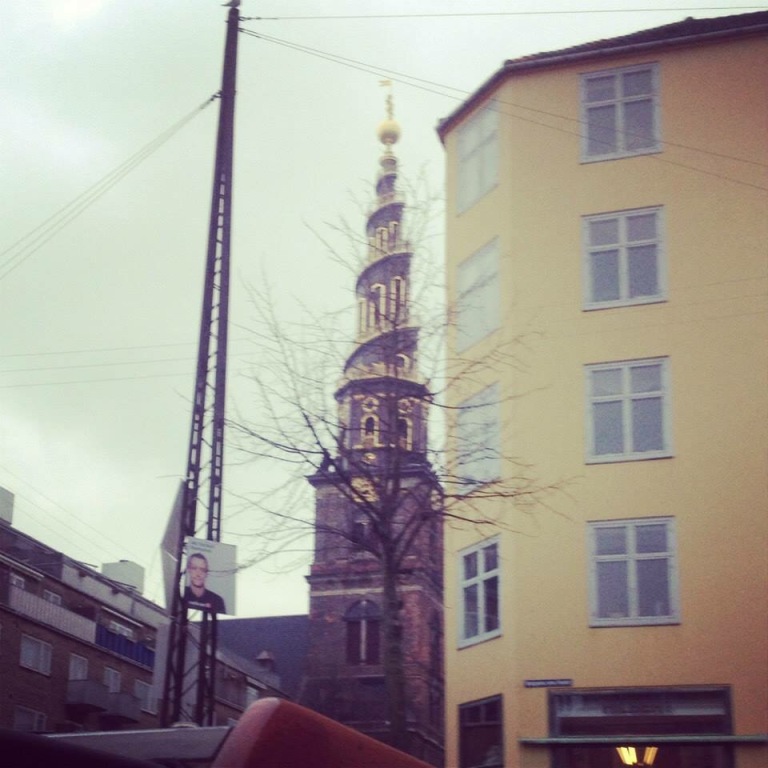 Having hopped off the boat we wandered up towards the Tuborg Brewery where we treated ourselves to a couple of well-deserved drinks each. That evening we had a delicious meal out followed by a night at the student’s union. Haha! I can’t say this was intentional, we found this cool looking bar with cheap drinks – it wasn’t until we’d made ourselves comfy that we realised where we were… It was great fun however! 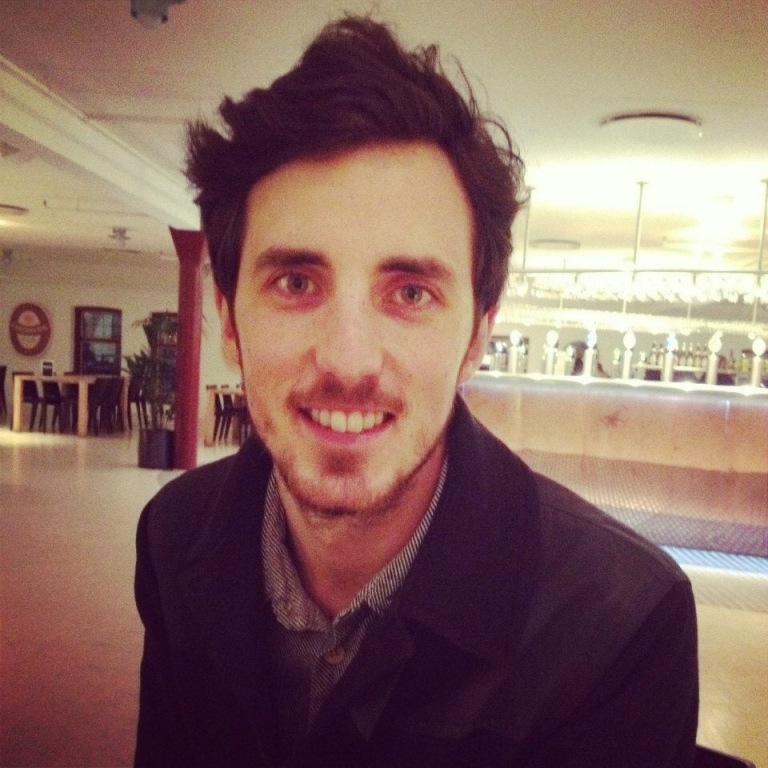 When we left the student’s union we noticed a big commotion out on the street! The streets were full of tons of people dancing in fake snow dressed in blue Santa outfits handing and handing out cans of beer – what possibly is this we thought?! Turns out, we were lucky enough to be in Copenhagen on the famous J-Dag.

To celebrate the coming of Christmas, on the first Friday in November (J-Dag) horse-drawn carts leave the Tuborg Brewery laden down with the limited edition Christmas Beer to deliver to the local pubs. At 8:59pm the Christmas beer is launched and locals dress up, complete with Tuborg-blue coloured Santa hats; free samples of the years brew is handed out and replica snow (aka: foam) lines the streets, particularly in the Rådhuspladsen (Town Halls plaza) in the city centre. It was great fun to watch and made us feel all festive inside! 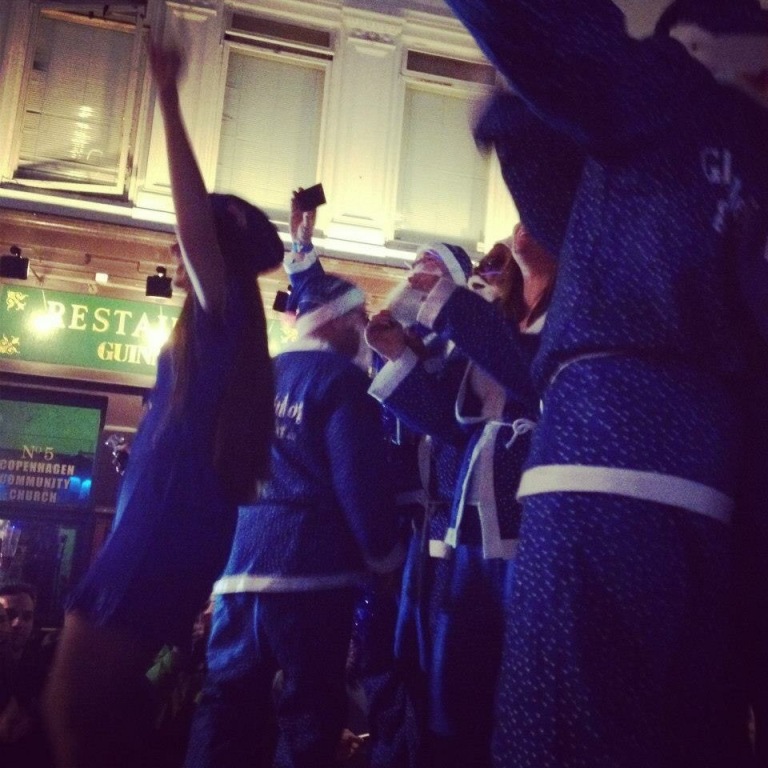 The next morning, we woke up early and made our way across to the Copenhagen Central train station to pick up visitors passes. We picked the up the 48 hour CopenhagenCard which gives you entry to many of the attractions across the city including museums and transport.

After picking up all our tourist essentials we wandered up past the famous Tivoli Gardens (which unfortunately was closed for the winter) and did a little shopping on the nearby streets. 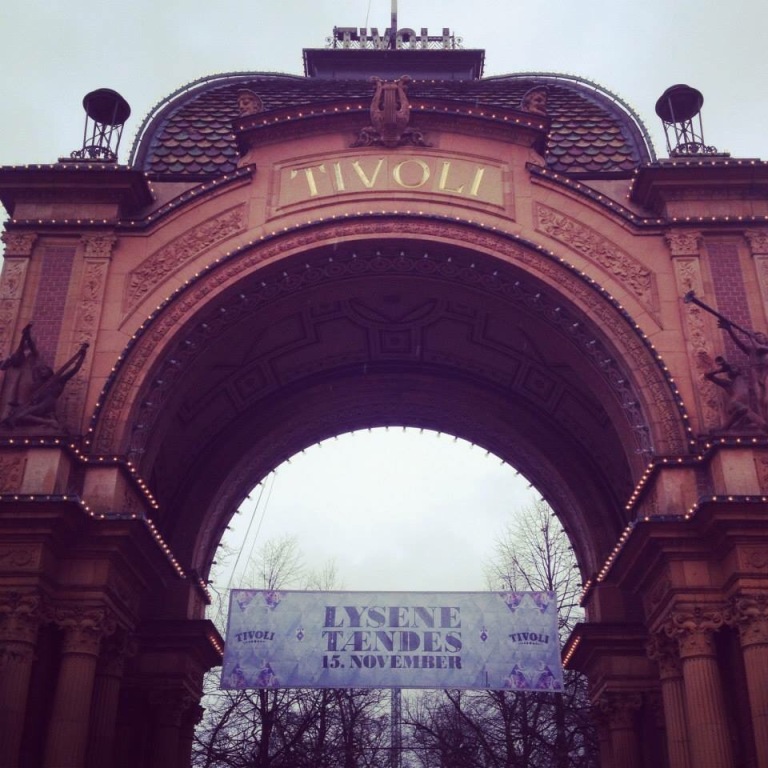 We then decided to pop into the Han Christian Anderson museum. This (almost Disney like) exhibition pays homage to the author’s most famous pieces and depicts the stories through moving/interactive displays. These famous fairy tales include The Princess and the Pea, the Little Mermaid, the Emperor’s New Clothes, The Ugly Duckling and Thumbelina. Although this exhibition is a little cheesy, it was free with our citypass and a good little stop off!

Our next stop off for the day was at the city’s Rundetaarn, a 17th century tower and observatory which is the oldest functioning observatory in Europe and gives you the most fantastic views out across the city. Luckily there’s not a single stair in sight as you make your way up the tower – the architect was my sort of person and implement a spiral floor to take you up to the viewing point! 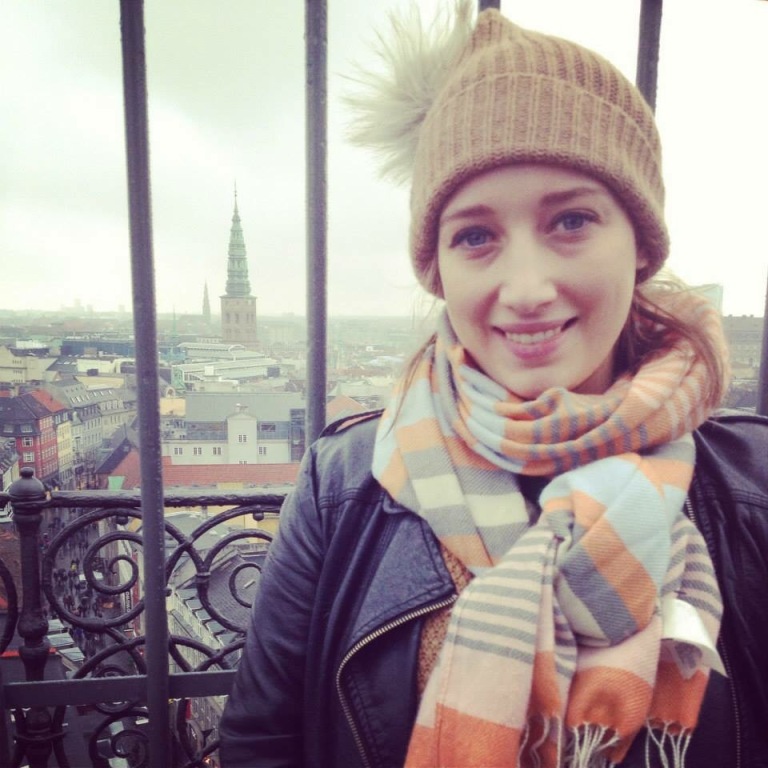 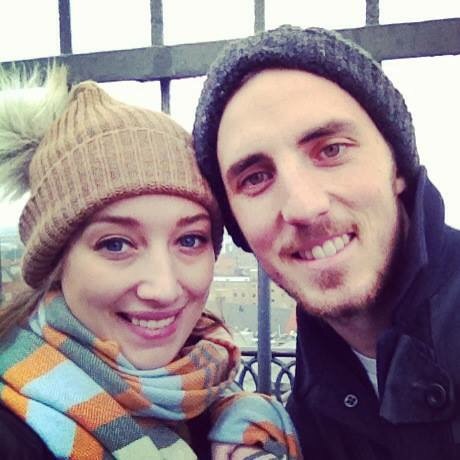 After making our way back down to ground level we headed towards the King’s Garden for a wander through the beautiful grounds. Nestled inside the gardens is the gorgeous renaissance style Rosenborg castle, built as a summerhouse for the king in 1606. You can go inside the castle and visit some of the amazing historical art works – you can also head down to the vaults and take a look at the spectacular crown jewels. 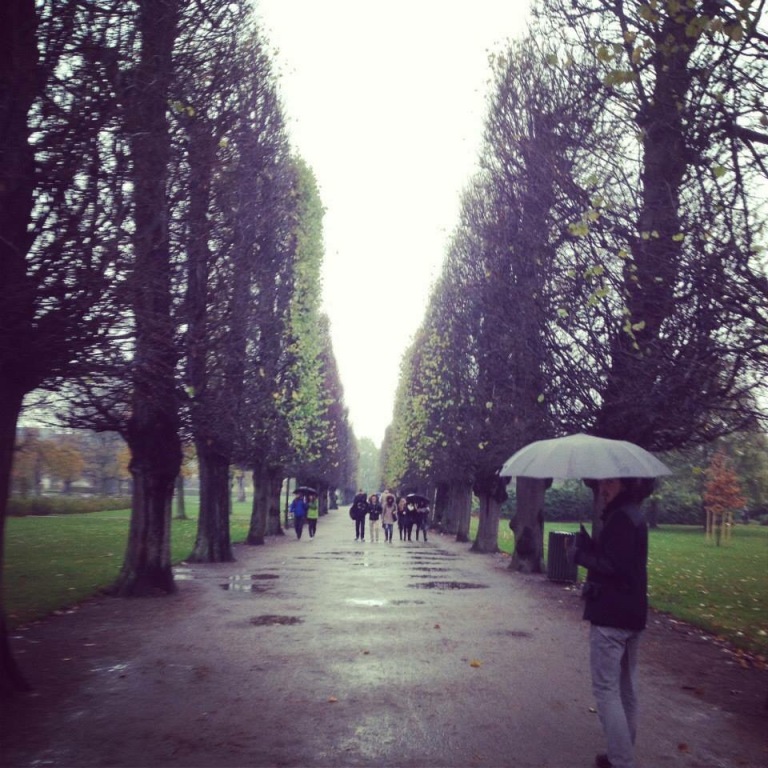 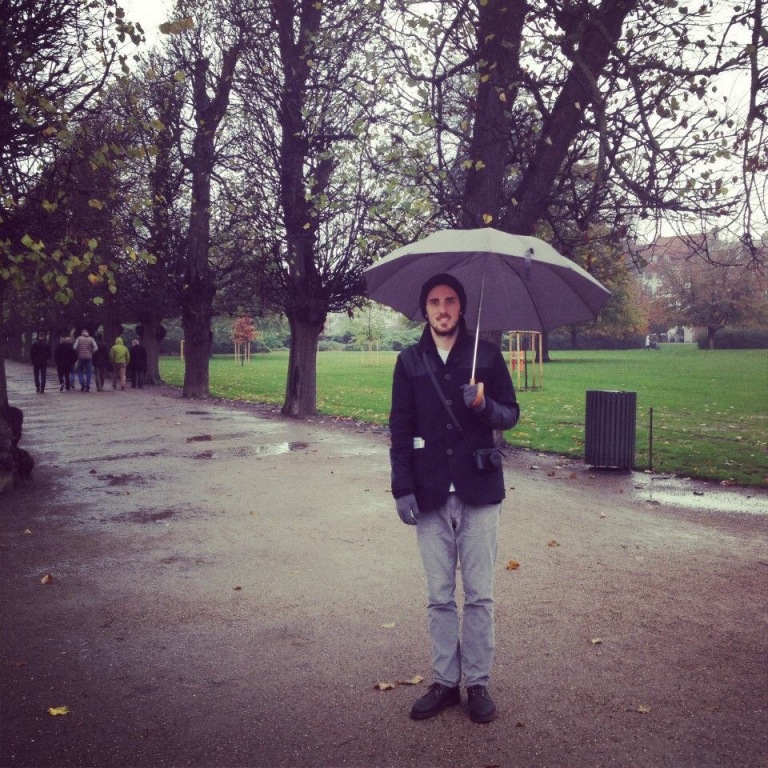 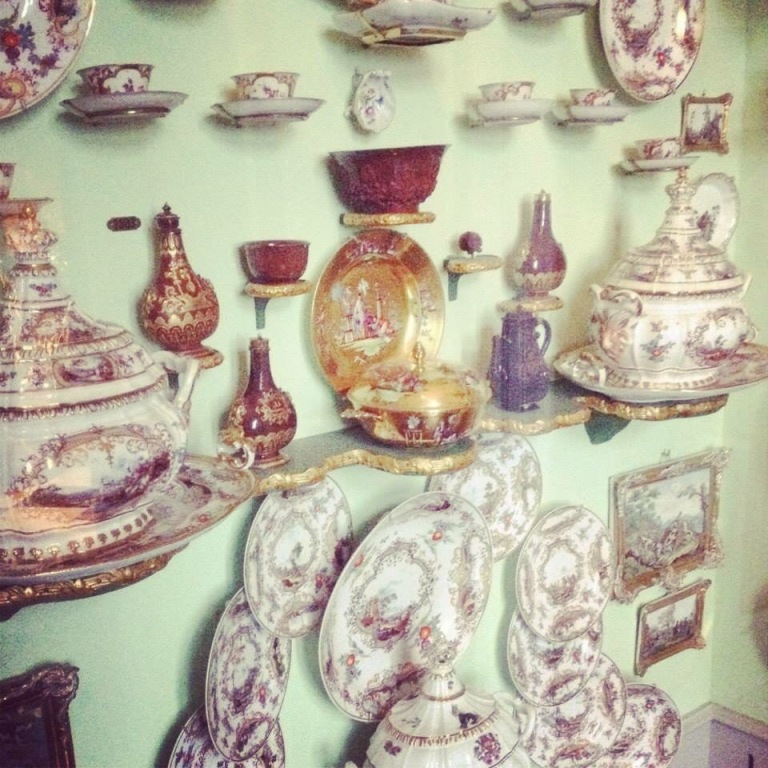 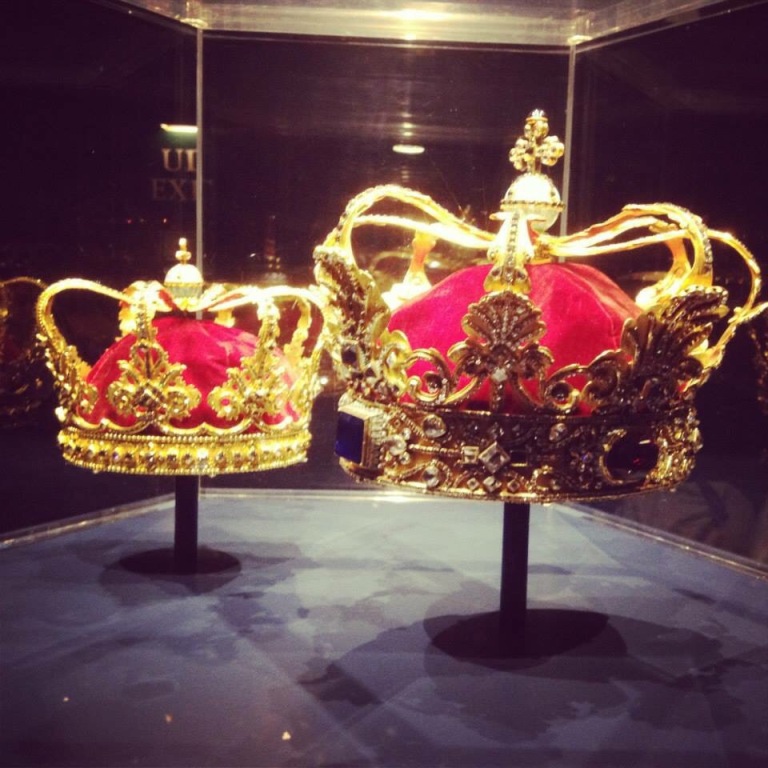 Having spent some time in the castle and grounds we took a trip across to the Assistens cemetery which the  most amazing scenery. Hans Christian Anderson’s grave is also in this cemetery which was interesting to see. As you exit the graveyard there’s loads of cool graffiti and wall art which we spent a while admiring. 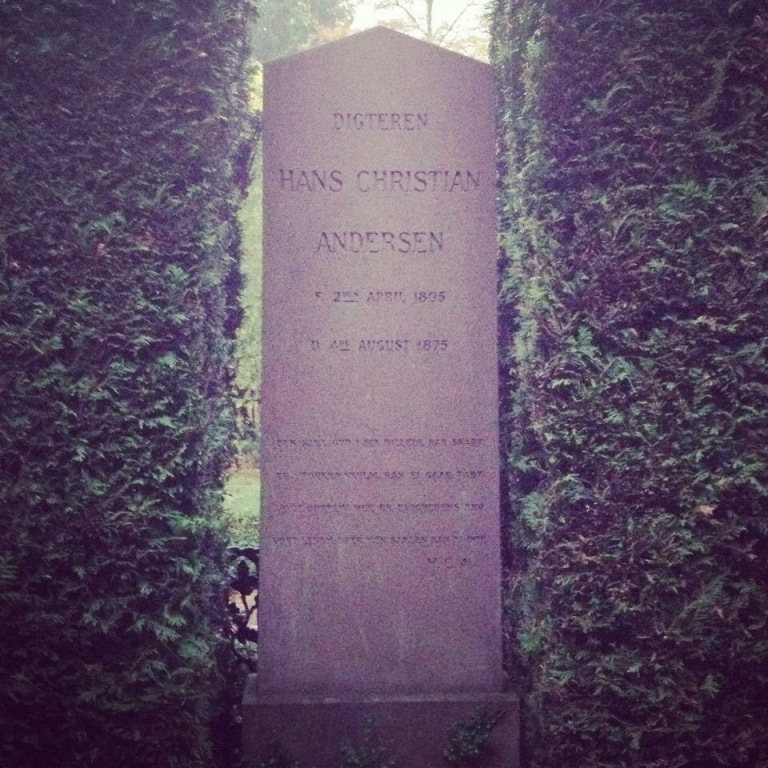 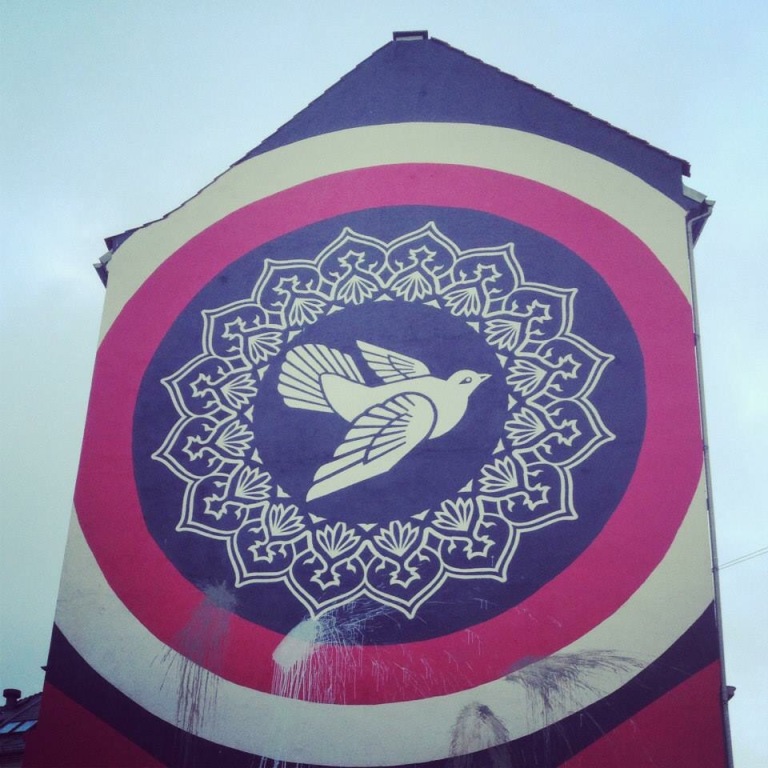 That evening, after cooking dinner in the apartment,  we decided to have a night out on the tiles. We had heard that the meat packing district of the city (Kødbyen) was the place to go on a night out with its cool bars, trendy clubs and creative restaurants. 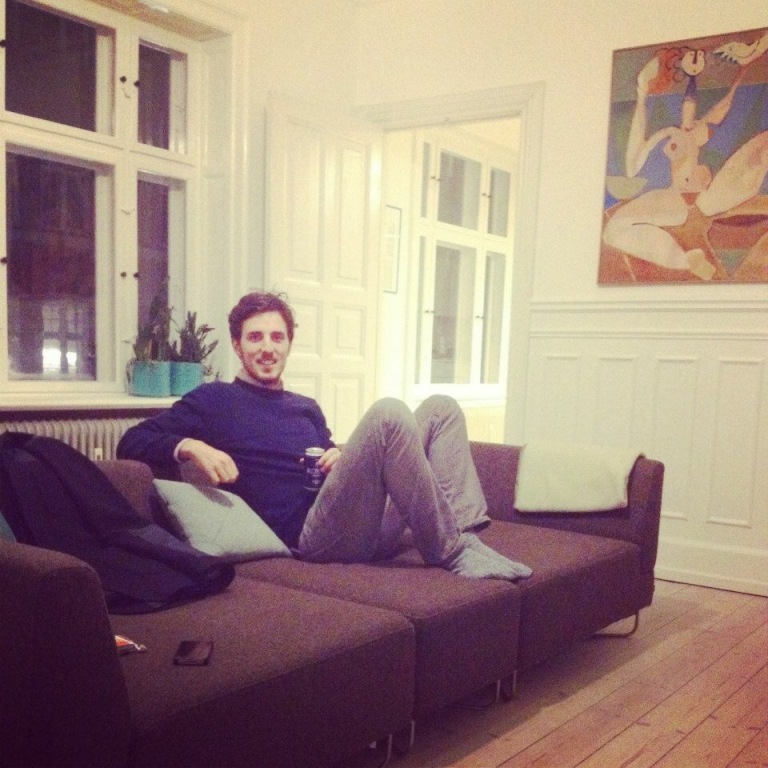 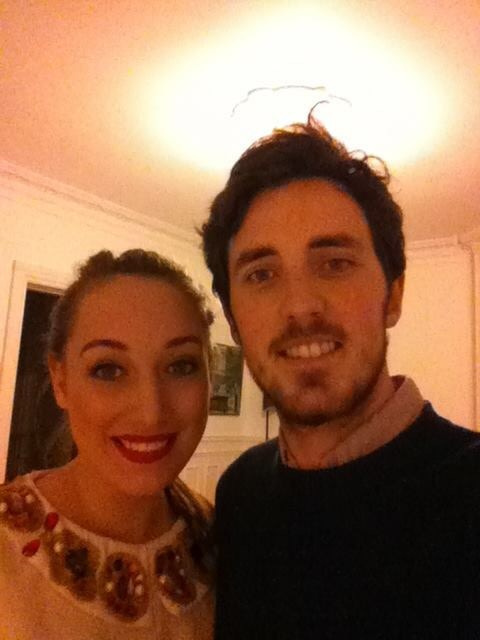 Out first stop was at one of the hipster bars where we had numerous delicious cocktails sat out by one of the windows watching the eclectic mix of people pass by.

Having filled our pre drink quota we headed to, Bakken, a nightclub situated in what looks like an old trading estate. The club is housed in an old slaughterhouse and with plastic still hanging from the door ways it’s not hard to believe that you’re sipping a drink and dancing in what, until recently, was an abattoir. 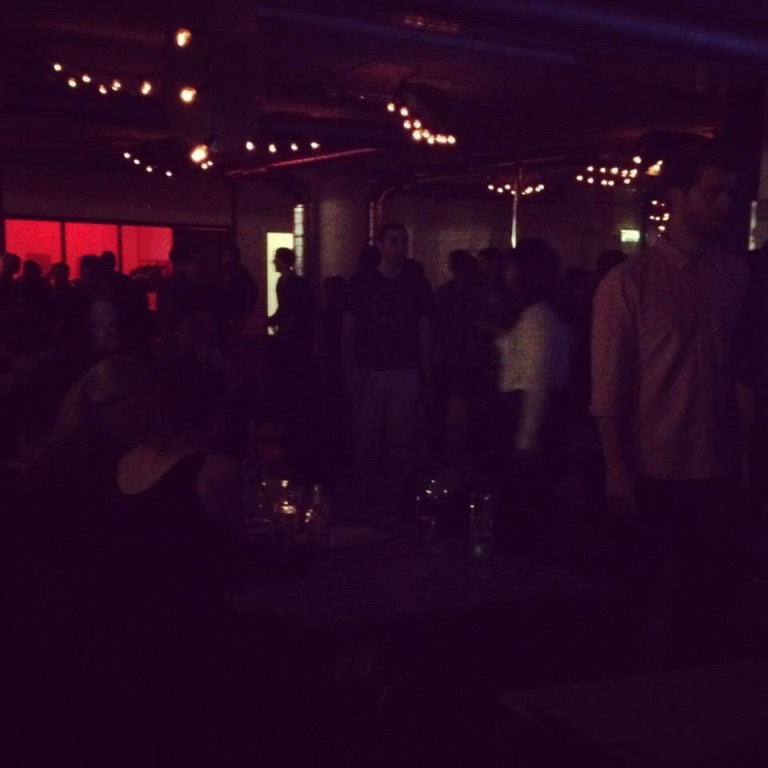 Miles and I stayed up dancing right into the small hours.  Naturally we took a pitstop off at John’s Hot Dog Deli stand by the train station as recommended by Anthony Bourdain – perfect end to the night food! 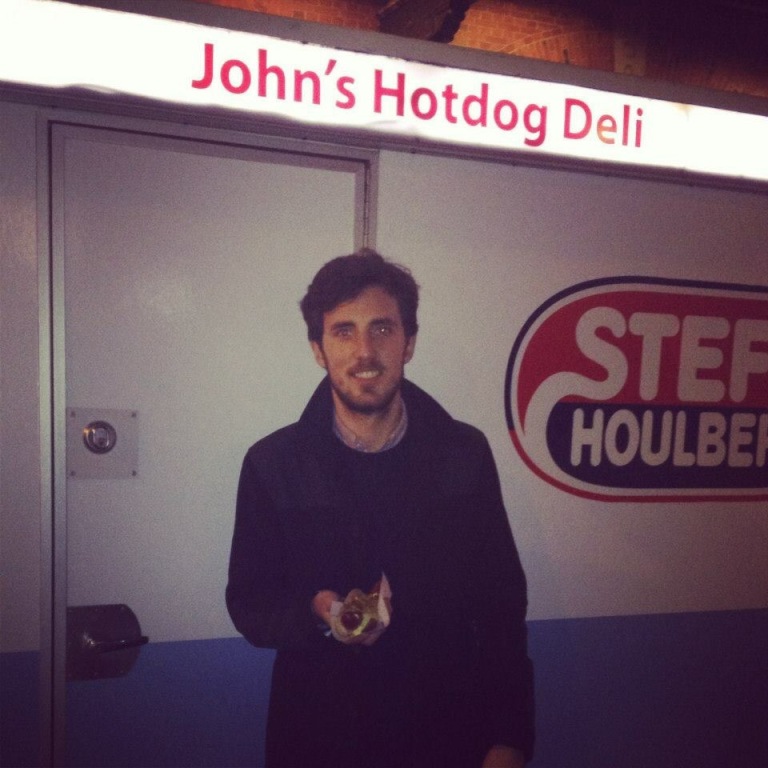 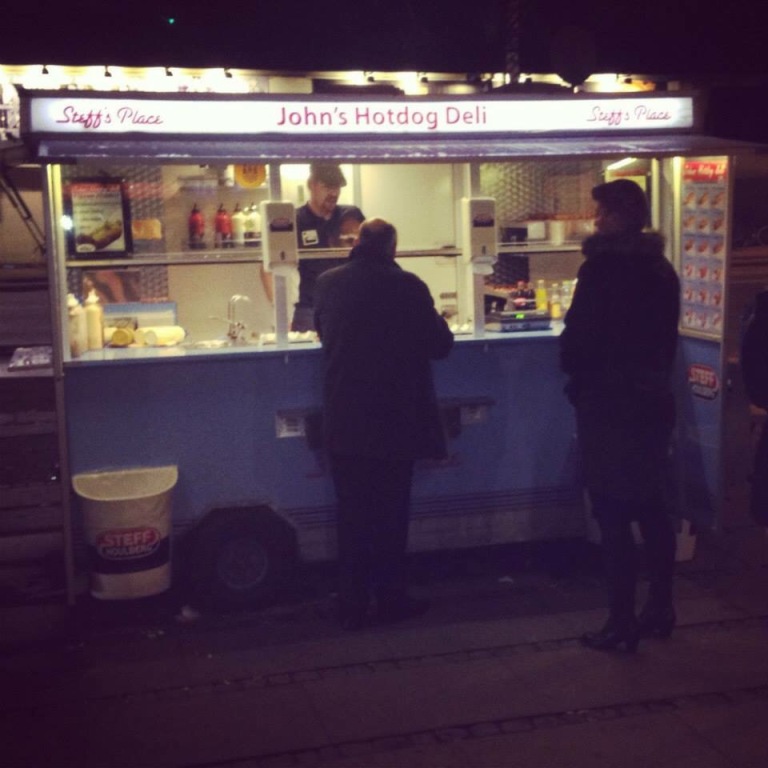 The next morning, still feeling a little ropey from the night before, we grabbed some pastries (you can’t come to Denmark and not try authentic Danish Pastries!) and headed towards the train station; our destination for the day – Louisiana Modern Art Gallery. The Louisiana Museum of Modern Art is an art museum located directly on the shore of the Øresund Sound in Humlebæk roughly 35km from Copenhagen. It takes a little while to get there and is definitely a whole day trip. 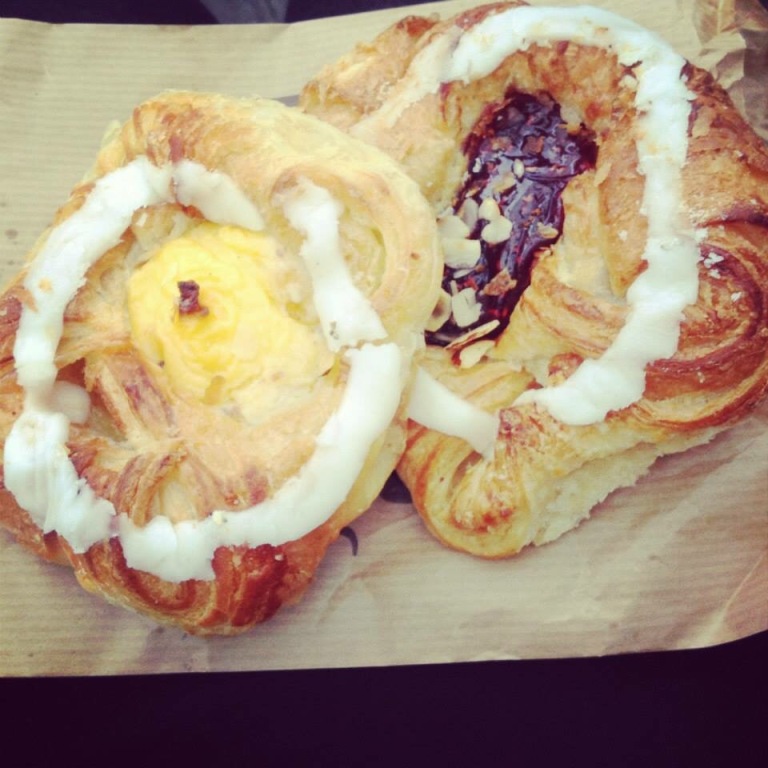 I was a little reluctant at spending a whole day away from the city we had flown to visit, but the gallery was fascinating – as was the scenery; you could look out at the coast and see across into neighbouring Sweden. 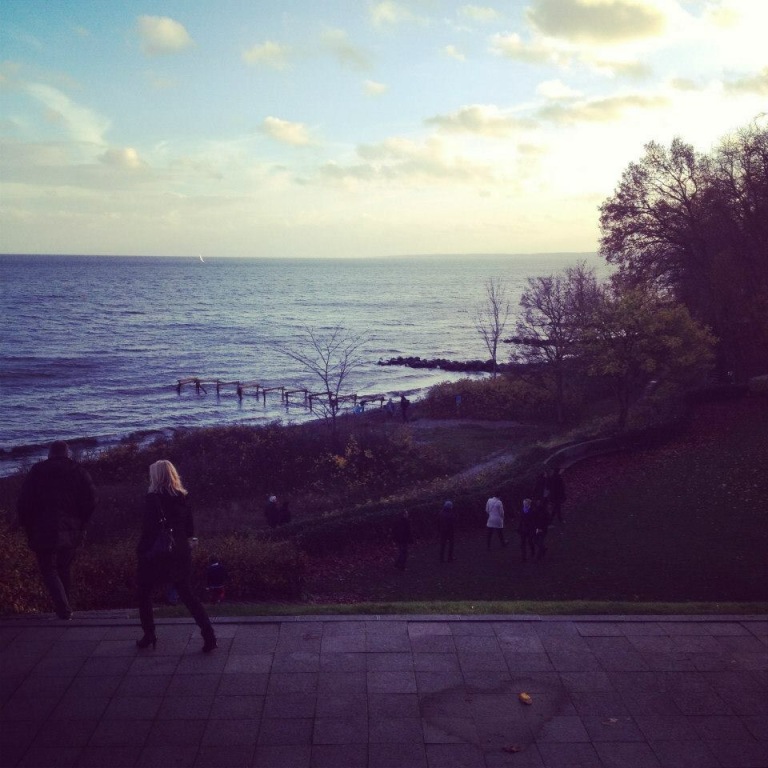 My favourite installation by far was the Gleaming Lights of the Souls by Yayoi Kusama. The installation, dating from 2008, consists of a single space, four by four meters. The walls and ceilings are covered with mirrors; the floor is a reflecting pool; and you stand in the middle of the water on a platform and take in the amazing reflecting lights surrounding you – it’s so beautiful. 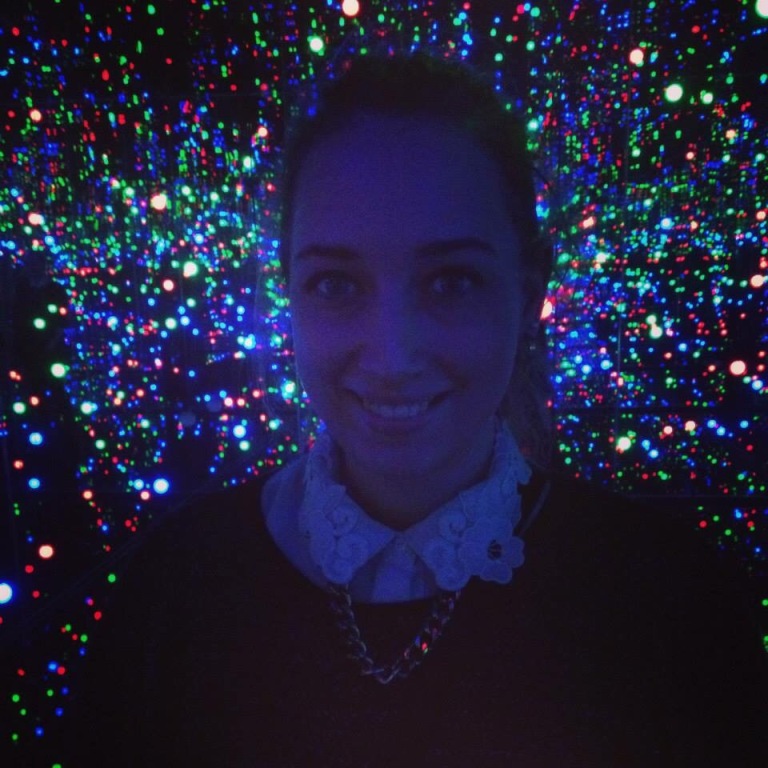 The gallery houses an award winning restaurant which operates a buffet feast of traditional Scandinavian delights  – it was amazing!!

Having spent the majority of the day at the museum we hopped back on the train and made our way back to Copenhagen. Somehow Miles managed to coax me into another museum so we spent some time wandering around the Danish museum of Design which, I hate to admit, I also really enjoyed!

Christiania is Denmark’s mini Amsterdam without the canals and world class museums. In fact the two places really only have one thing in common, marijuana. Before the 1970’s Christiania was better known as a military camp, until it was taken over by hippies during the height of the hippie movement where communal living and an alternative lifestyle were popular. 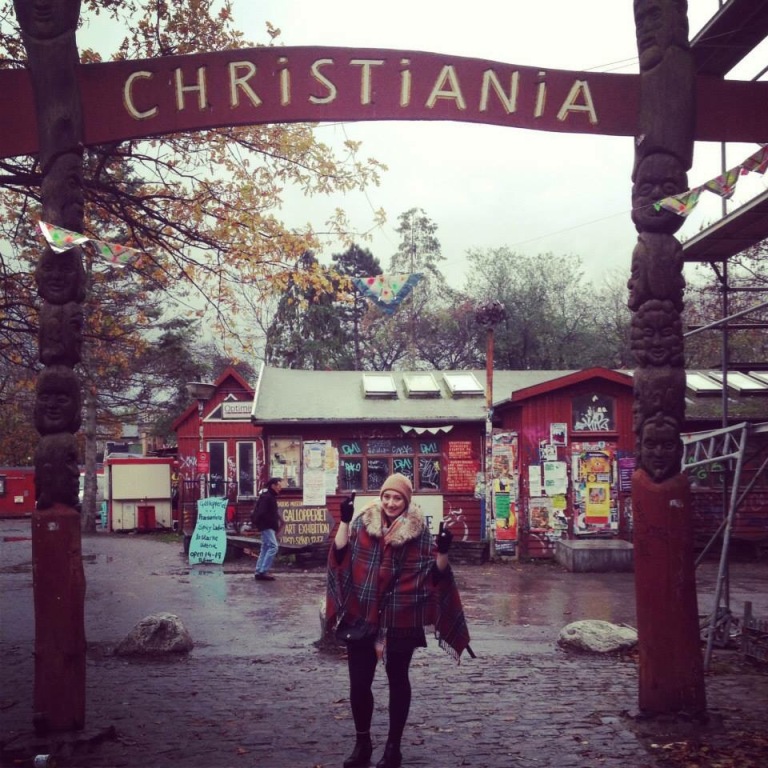 Christiania was originally proclaimed as a free state, and as a result citizens living in there didn’t follow the laws of the society that surrounded them. In fact, they had their own laws, didn’t pay taxes, didn’t pay rent, and ran their own schools, businesses and community programs. When it was first established the government tried to shut it down unsuccessfully due to public pressure, and the community remained. 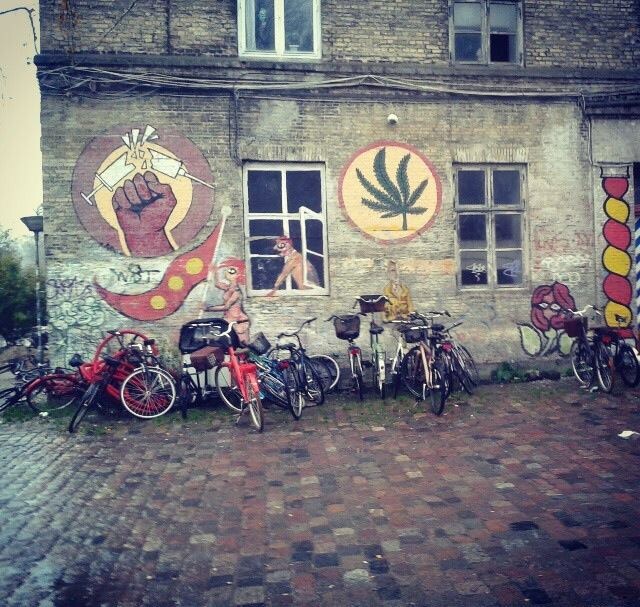 Nowadays Christiana is a great place to wander round, admire the interesting homes and, if you so wish, purchase some of the *delights* from the aptly named Pusher Street. I’ll have you know that we made no such purchases…!! We did however step off the tourist map slightly and amerced ourselves, for one evening, in the community and attended the jazz night in one of the town’s meeting houses. This was such a brilliant, but surreal evening. One particular memory was the time two of the locals got into an actual fight because one of them indulged in too long a drum solo during one of their pieces – hilarious!

We wandered home that evening a little light headed – nothing like sharing a confined spaces with a group of hippies….!

The next morning, our last day in the city as we were flying home that evening, we wandered again through the city and made our way to the HAY flagship store – the Hay House. We don’t really have HAY in the UK – you can get some of their bits in Selfridges – but they have the most beautiful Scandi style interior pieces. We probably spent two hours in their three storey shop on Østergade. The store also had beautiful views out across the main shopping district of the town. 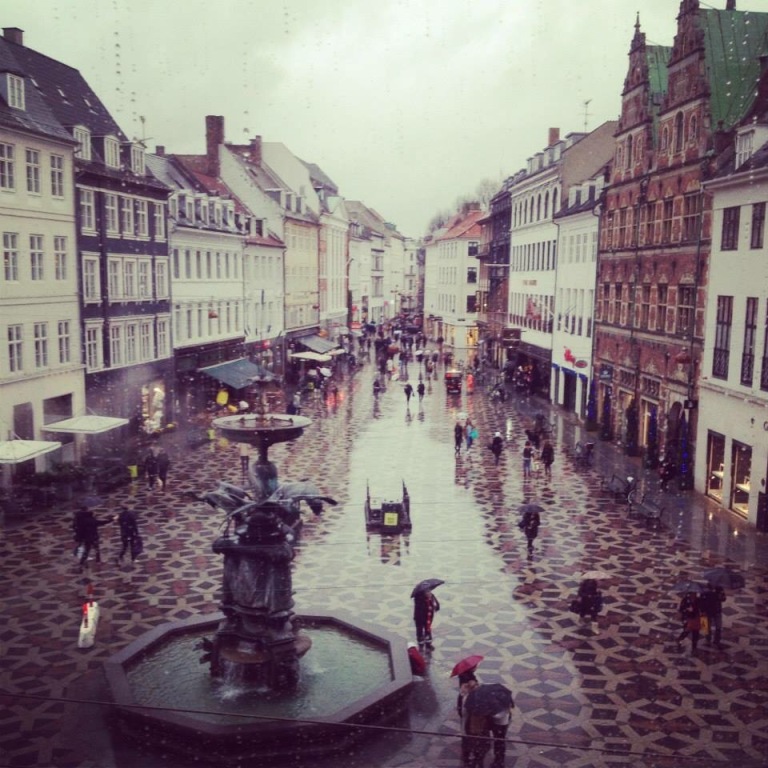 After shopping until our little wallets couldn’t take any more we headed across to Torvehallerne. This indoor food market is the Danish answer to Borough Market and with over 60 stands selling everything from fresh fish and meat to gourmet chocolate and exotic spices. It serves up the most delicious treats – we decided to go for stonebaked pizzas at Gorms.

Having stuffed ourselves with pizza, and having tried all the free tasters on offer in the market we headed across to Nyhavn, the picture perfect post card scene typical of Copenhagen with its tall ships and colourful town houses lining the glistening canal. 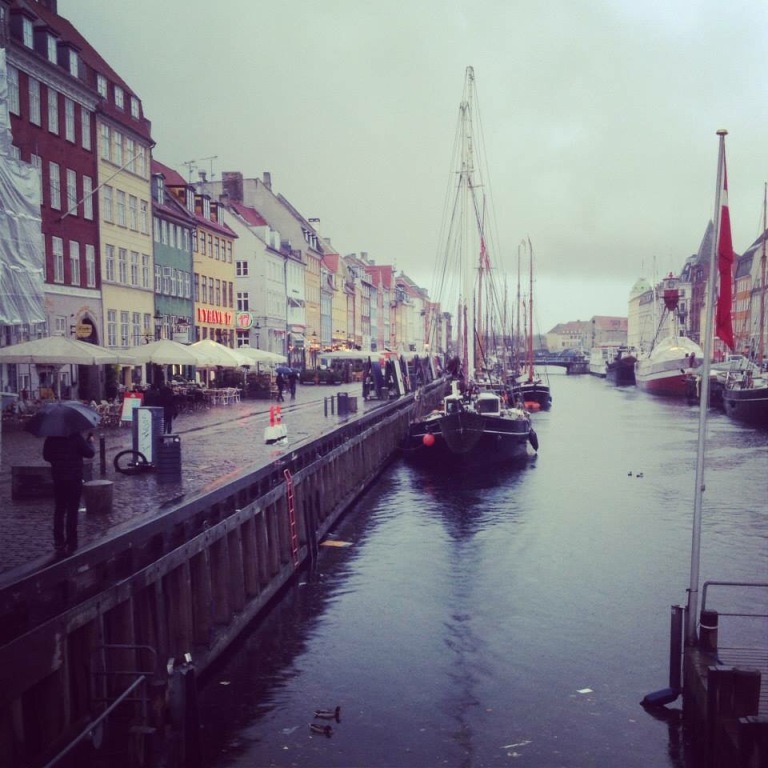 Miles and I planned to spend a little time here before heading to the airport, we popped into a tiny, empty canal side bar Hyttefadet, where we ordered a glass of mulled wine each. In the end we spent maybe three hours here and ordered round upon round of the most delicious Gluhwein that I have ever tasted. We loved it so much that we even asked for the recipe so we could make it at home. 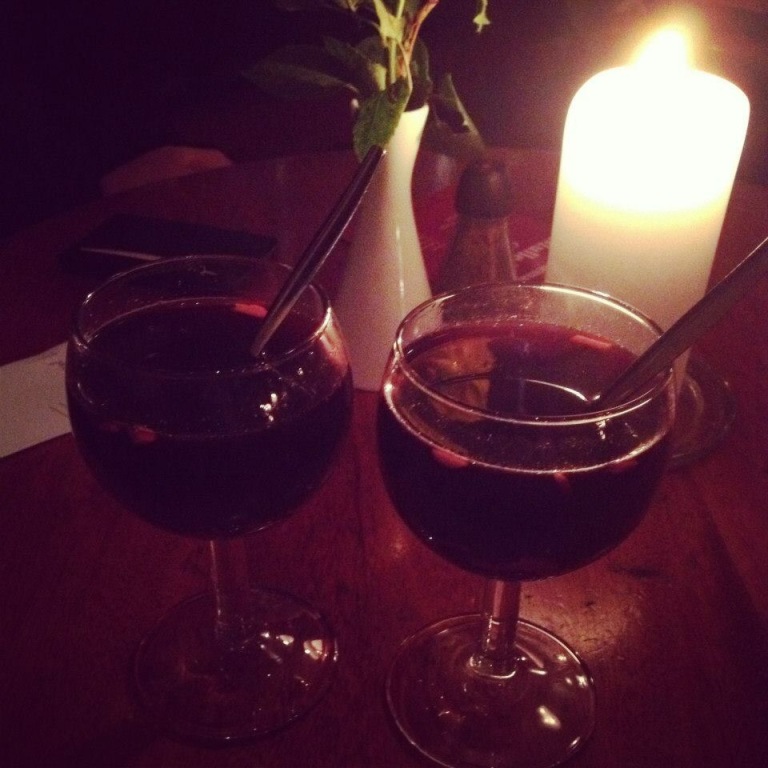 Unfortunately it was soon time to depart our little cosy corner of the bar and make our way to the airport. A little word of warning, don’t fill yourselves up on mulled wine before boarding a plane. Miles and I sat in front of, what turned out to be a broken screen, for a couple of hours before narrowly missing our plane and our names being called out on the tanoy. Oh well – you live and you learn!

Copenhagen you were fantastic! I can’t wait until we head back and visit some of your Scandi neighbours!

One thought on “Copenhagen, Denmark”